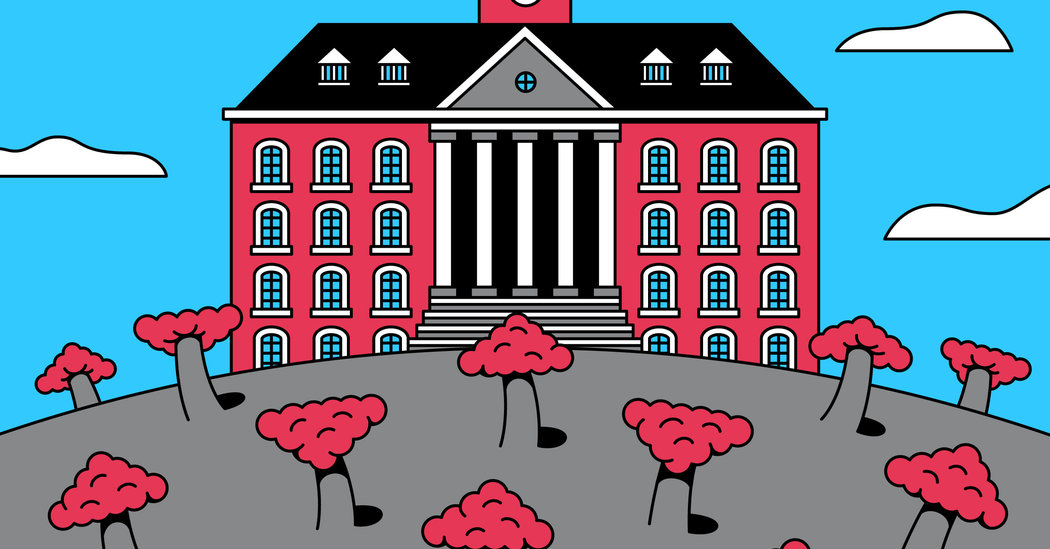 Families are already wondering what college campuses will look like, post pandemic. They may also be reconsidering the price of a college education, after seeing the toll the virus-induced stock market turmoil took on their 529 college savings plans.

The impact of recent market gyrations on the accounts depended on the age of the student and the type of investment, according to a new report from the research firm Morningstar. Many families put their tax-favored 529 savings in preset investment portfolios that change as their child gets closer to college age, starting with investments heavily weighted in stocks to take advantage of potentially greater returns. The money shifts over time into less volatile holdings, like bonds and cash, as college approaches.

In the first three months of this year, those age-based and target-date portfolios tumbled along with the broader market, Morningstar found. Quarterly losses averaged as much as 19 percent for portfolios focused on children age 4 and under, while those for students 17 and 18, who will probably be heading to college this year and next, fell less than 5 percent, on average. (Morningstar compared the losses to a global stock index, the MSCI ACWI Index, which lost 21.4 percent in the first quarter.)

The report, which covered most state plans, didn’t break down returns or cite specific plan fees, although it did find that fees overall had fallen.

While losses can be daunting, the relatively muted declines for students nearing college suggested that age-based 529 portfolios held up reasonably well, said Madeline Hume, an analyst with Morningstar. Overall, the plans “worked as expected,” she said.

For a family with a balance in their 529 account of $50,000 — the average cost of one year of tuition, fees, room and board at a private, four-year college, according to the College Board — the average loss for older teenagers was as much as $2,100, although some individual portfolios saw larger losses.

Still, despite their “highly diversified” holdings, age-based portfolios proved “more susceptible to declines” than anticipated, the report noted. Just one portfolio type — representing students who are already in college — had losses in line with what would be expected, based on the level of stocks in the portfolio.

The report attributed the outsize losses to “disappointing” results in the underlying funds making up the portfolio; fees, which eat away at returns; and investments in “riskier” types of bonds, which offset holdings in higher-quality bonds.

“Reality,” Ms. Hume said, “ is always just a little bit messier than the studies say it will be.”

While families with young children have years to recoup the losses before they must start paying college tuition, older teenagers are running out of time. On average, the report calculated, 18-year-olds need a 3.5 percent return to recoup their first-quarter losses. Based on returns in age-based plans over the past nine years, that’s “not an unrealistic goal” to achieve in less than a year, Morningstar said. Because of a market rebound in April, the average 18-year-old has already recouped 2.8 percent.

“The high-level message,” Ms. Hume said, “ is that the first quarter was far from a disaster for college savers.”

Of course, continued economic uncertainty because of the virus make strong returns uncertain. What, then, is a family to do?

It’s difficult for families to accumulate enough money for college and avoid the need for student loans, without investing. Families have turned to 529 accounts as the price of a four-year college has ballooned while wage growth stagnated. Money deposited in the accounts grows tax free, and is tax free when withdrawn and spent on eligible expenses, including tuition, housing, meal plans, books and equipment. Recent legislation also allows the money to pay for private schools for children in kindergarten through 12th grade, as well as for formal apprenticeships and to repay student loans, within limits. There’s no federal tax deduction for contributions, but some states offer tax breaks.

At the end of last year, there were more than 14 million accounts with an average balance of about $26,000, according to the College Savings Plans Network, a group that promotes the plans.

Advisers suggest families carefully consider their risk tolerance and opt for a less aggressive approach if market gyrations are too hard to stomach. Be sure to understand your plan’s stock allocation, especially as college nears, said Christopher Parr, a financial planner in Columbia, Md. “Most people don’t know what’s going on under the hood,” he said.

If you expect to be paying tuition in the near future, he said, “That money doesn’t belong in the stock market.”

Most plans offer low-risk options for cautious savers, or those who have just a short time left before college. California’s ScholarShare 529 program, for instance, offers a “principal plus interest” option that guarantees a return of at least 1 percent and no more than 3 percent. Others offer a money-market option.

It’s also important, advisers say, to understand the details of how your 529 portfolio shifts holdings from stocks to bonds over time. Some plans may move money relatively abruptly, often around a child’s birthday, which can hurt returns if the move comes when the stock market is down. It’s preferable, and common, for plans to make the shift more gradually to reduce the risk of locking in losses.

Despite roiling financial markets and economic woes, there hasn’t been an apparent rush to withdraw money from 529 accounts, plan representatives say. But it’s also because families still see a need to save for college, despite near-term uncertainty about a move to online classes because of the coronavirus. That’s partly because if people spend the money for a noneducational use, they face income taxes and a 10 percent penalty on the earnings portion of the withdrawal.

“Nothing, in my mind, has changed significantly to make me want to adjust our strategy,” said one investor, Steve Blackmarr, a senior manager with Amazon Business Professional Services. He considers college savings a long-term investment, he said, and intends to keep saving for his children, ages 9 and 11.

Peg Creonte, head of government savings at Ascensus, which administers 529 plans in 26 states and the District of Columbia, said that while one-time contributions had fallen compared with last year, scheduled contributions mostly weren’t affected. “We did not see any sort of panicked reaction,” she said.

Utah’s my529 plan saw new accounts increase in early May, to 29 per day this year from about 16 per day last year, said Bryn Ramjoue, the plan’s marketing director.

Here are some questions and answers about 529 accounts:

Cash is tight. Should I stop contributing to my 529 fund?

That depends on your circumstances. Andy Mardock, a financial planner in Bend, Ore., said clients typically placed a high value on college savings. But if someone has a loss of income, he said, and is faced with tapping emergency funds or using a credit card to cover basic bills, “the clear answer is to cut 529 contributions.”

If possible, advisers say, temporarily reduce contributions rather than stopping. By saving regularly, you will buy more stocks when prices are low and fewer when prices are high.

Andrew Rumbach, an assistant professor of urban and regional planning at the University of Colorado Denver, said he and his wife considered education paramount, but have temporarily reduced the size of their contributions to their child’s 529 plan during the pandemic. They consider themselves privileged to remain employed, he said, but the slowdown has eroded the extra income they make from consulting. They aim to increase contributions again, he said, when things pick up.

When is the best time to open a 529 account?

It’s generally wise to open an account when a child is young, advisers say, to allow as much time as possible to save and for investments to ride out market declines.

You can even open an account before a child is born to gain the advantage of additional time. Just name yourself as the beneficiary initially, then later change it to the child’s name.

Many 529 plans are offering promotions this month, from small matching contributions to the chance for bigger jackpots, to encourage families to open accounts.

The offerings are pegged to “529 Day,” which the plans observe on May 29, but some run into June.