A (Barely) Controlled Explosion, and 330 M.P.H. Before You Can Blink 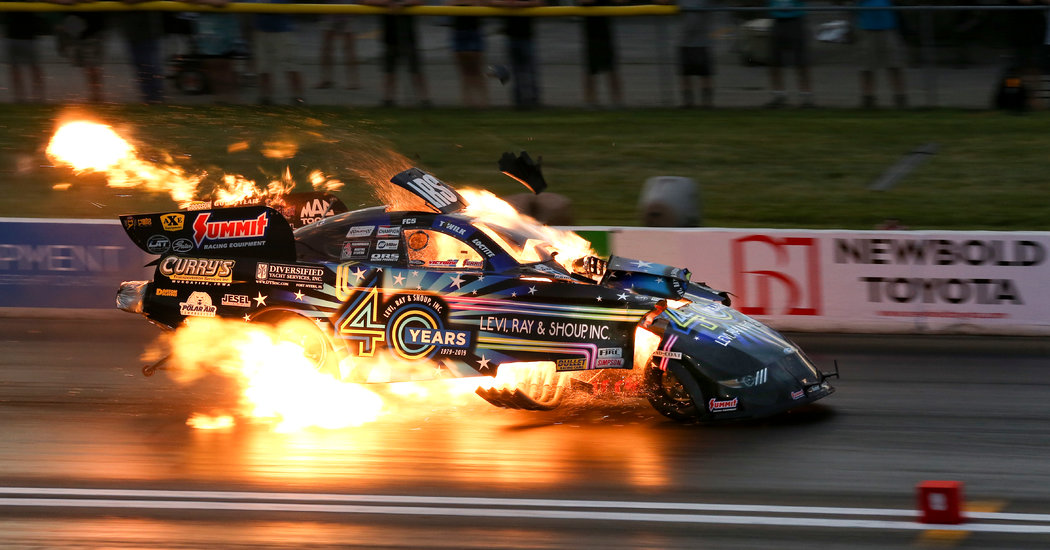 At the head of a straight ribbon of pavement, a swarm of technicians and worker bees is attending to an odd contraption — a seeming cross between a car and the Batmobile. A brief, explosive show is about to thrill thousands watching from the grandstands.

In four seconds of insanity, that contraption, known as a funny car to fans of drag racing, seemingly dances on the pavement, exploding to 330 miles an hour in little more than an instant.

Inside its 500-cubic-inch engine, all hell is breaking loose. Nitromethane fuel is pouring into the eight cylinders at a rate of up to 115 gallons a minute. A supercharger packs in enormous quantities of air, and the earth moves as the power of 10,000 horses hammers the 17.5-inch-wide tires, which distort, squat and then swell as the car rockets down the strip.

Battling five Gs of force, the driver struggles to keep the car aimed straight. A thousand feet down track and less than four seconds later, the 2,600-pound machine trips the finish line lights.

Austin Coil, a retired drag racing crew chief who won numerous national championships over 44 seasons, once said, “You painstakingly prepare this racecar. Then a driver wearing a silly costume beats it to death.” Much of the information in this article is based on interviews with Mr. Coil, who is among the sport’s greatest innovators. His partner in mechanical shenanigans, Bernie Fedderly, another top tuner, contributed as well.

Drag racing engines, which are loosely based on a half-century-old Chrysler design, were developed by thousands of backyard mechanics and a few engineers working independently but sharing knowledge. Many took big bold steps, causing giant explosions and violent accidents. But they persevered and created what is undoubtedly the most powerful — and most disposable — racing engine known to man.

The first step in the evolution of today’s drag racing engine was recognizing nitromethane’s potential as a fuel. A commercial solvent used to clean the plates of printing presses, nitromethane contains oxygen, so it can burn with less atmospheric oxygen than gasoline. In fact, an engine can burn approximately eight times more nitromethane than gasoline in one stroke of a cylinder. Gasoline has higher specific energy than nitromethane, but because so much more nitromethane can be burned, it can produce more than twice as much power as gasoline when combined with the same amount of oxygen.

Step two was the supercharger. Since nitromethane can produce a lot of power with only atmospheric oxygen, packing more air into every cylinder with a huge air pump increases the power output by several multiples. The first drag racing superchargers were cribbed from GMC diesel engines. Today, they’re manufactured with exotic materials to exacting specs and tested extensively before being bolted onto an engine.

In the early years of drag racing, competitors were happy with a modest 1,000 horsepower or so and were loath to destroy their equipment with huge loads of nitromethane and ungodly cylinder pressure. But beginning in the mid-1970s, when funny cars were hitting 220 m.p.h. in about six seconds, the competition became fierce and racers started pushing their engines harder. The cast-iron Chrysler cylinder blocks became a weak point, cracking the main webbings after just a few runs. So aftermarket suppliers began producing stout and lightweight aluminum blocks and cylinder heads.

And the experimenting accelerated. Soon, damaging the engine became acceptable, and rebuilding it after every run became standard. At first, crews of mechanics just replaced broken parts. Today, the motor is almost entirely rebuilt with fresh parts. The crew has 90 minutes to complete the rebuild before car and driver are called to the starting line for another round. The work has to be carefully coordinated, much like a combination of dance and sport.

Over the years racers learned that fuel volume is the key to mind-bending horsepower. More fuel burned equals more horsepower. Today, the fuel is pumped into the engine through 42 fuel-injection nozzles in the manifold ports, the cylinder heads and the throttle body that sits atop the supercharger. The fuel system works in synergy with a range of variables, including ignition timing, supercharger boost, compression ratio, clutch application rate and more. Mistakes or sudden changes in air density can lead to destruction.

Mr. Coil had the advantage of having worked with John Farkonas many years ago. One of just a few trained engineers in the sport, Mr. Farkonas preached scientific method.

“Farkonas taught me that if you can’t explain why something happened with science or physics, it didn’t happen,” Mr. Coil said.

As drag racing engines became more complex, the scientific method became more critical, both in terms of winning and avoiding disaster. Data from every 1,000-foot sprint is downloaded to a computer system that records 32 channels of information from a variety of temperature, pressure and r.p.m. sensors. The National Hot Rod Association, a sanctioning body, doesn’t permit computer adjustment of variables during a run. Instead, the crew chief adjusts parameters between runs using past data.

Mr. Fedderly has also contributed greatly to engine development. Trained as an automotive technician, his real education came while wrenching a number of funny cars and top fuel dragsters. Asked how a violently powerful engine can be tuned to keep the car right on the edge, he said, “success requires absolute accuracy.”

He pointed out countless variables, including weather and track temperature. A digital map of tuning specifications “can be plugged into the control systems right up until the time the car pulls to the starting line,” Mr. Fedderly said. “Get it wrong and the results will usually be disastrous.”

The crew chief gives his go ahead, the car pulls to the starting line and another flame-throwing sprint begins. Should a critical engine part malfunction, fuel in the manifold explodes, shredding the $70,000 carbon-fiber body and demolishing the engine. Even if the power plant survives, it’s as thoroughly used up as a detonated stick of dynamite. It will be completely rebuilt before another run.

Back in the pits, the crew begins another 90-minute thrash, diving in before the towed racecar has come to a complete stop. If the body was sacrificed on the last run, a new one is downloaded from the top floor of the team’s eighteen-wheeler workshop. The driver, drained by the four-second battle with a monster machine, catches his or her breath, autographs hats and T-shirts and looks forward to doing it again.

With a field of 16 cars competing in an elimination-style tournament, the crew will have to rebuild the engine three times and the driver will have to endure three rounds of bone-crushing G forces to get to the final round. If the win light comes on after that fourth run, it will all be worth it.