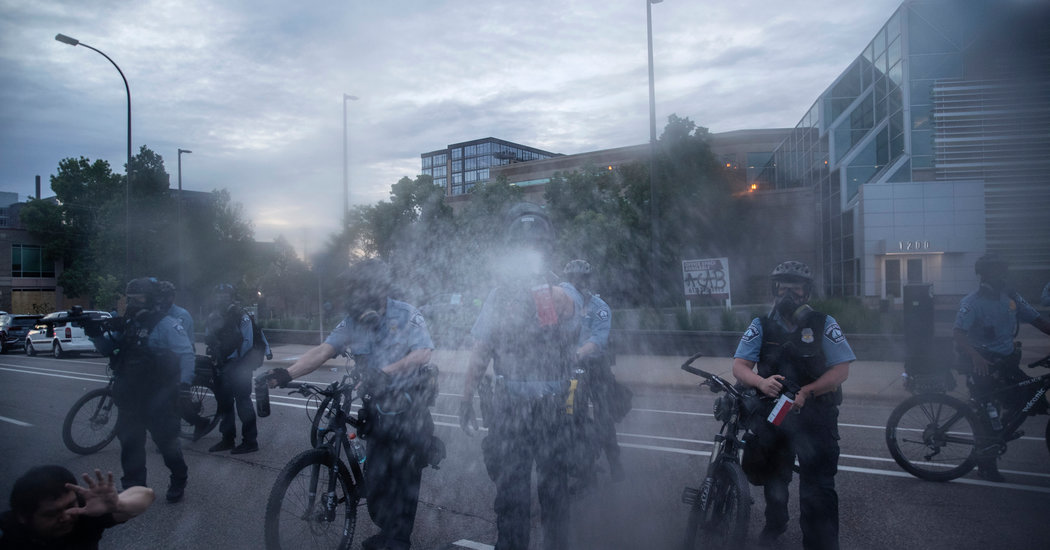 Dozens of journalists covering the nationwide protests against racism and police brutality have said they were attacked, arrested, intimidated with weapons or shot with nonlethal projectiles while doing their jobs.

In response, the American Civil Liberties Union of Minnesota on Tuesday filed what is believed to be the first lawsuit accusing a city of abridging the constitutionally mandated freedom of the press.

The lawsuit, filed on behalf of Jared Goyette, a freelance journalist who has contributed to The Washington Post and The Guardian in recent days, named the city of Minneapolis along with several law enforcement officials as defendants. The A.C.L.U. is seeking class-action status for the suit, which was filed in Federal District Court in Minnesota.

The city of Minneapolis did not immediately provide a comment.

According to the complaint, Mr. Goyette was reporting on a protest in south Minneapolis last Wednesday when he was shot in the face with what the suit described as “less-lethal ballistic ammunition.” At the time, he was helping an injured person, and there was no warning before the projectile was fired, the suit said. Mr. Goyette was identifiable as a member of the press by a camera attached to a stand and his notepad, the suit said.

“These acts would chill a reasonable person from continuing to engage in a constitutionally protected activity,” the lawsuit said. “These acts did, in fact, chill plaintiff and the plaintiff class from continuing to observe and record some events of public interest, including constitutionally protected demonstrations and the conduct of law enforcement officers on duty in a public place.”

Minneapolis, the city where George Floyd was killed while in police custody on May 25, has been the site of numerous protests. Many journalists who covered those demonstrations and others around the country told The New York Times that they were targeted by police officers while doing their jobs, even as they wore press badges or informed law enforcement officials that they were journalists.

The A.C.L.U. said this lawsuit would not be the last it would file on behalf of journalists who have been harmed while covering the protests.

“We will not let these official abuses go unanswered,” Brian Hauss, a lawyer with the A.C.L.U.’s Speech, Privacy and Technology Project, said in a statement. “This is the first of many lawsuits the A.C.L.U. intends to file across the country. Law enforcement officers who target journalists will be held accountable.”

Journalists are not immune to crowd-control orders, but the First Amendment is widely recognized to confer protections on the work of public documentation. Many cities, including Minneapolis, have seemingly recognized the special status of journalists by exempting them from the curfews that have gone into effect in recent days.

The A.C.L.U. lawsuit noted other journalists targeted by law enforcement in Minneapolis while covering recent protests, drawn from Twitter posts and news reports.

The defendants in the suit “interfered with the news media’s right to cover public events by refusing access to areas where events were unfolding and creating obstacles to the reporters’ movement about the city,” the lawsuit said. “These incidents constitute flagrant infringements on the constitutional rights of individual reporters, as well as the public’s interest in the dissemination of accurate information and accountability of government.”

The lawsuit asked for a declaration of constitutional violation and an injunction. It asserted that the defendants had retaliated against Mr. Goyette and other journalists for exercising their First Amendment rights; had unlawfully “seized” Mr. Goyette and others, under the Fourth Amendment, in their attacks; and denied them due process of law.