A Family Heirloom, Restored From Hood to Taillights 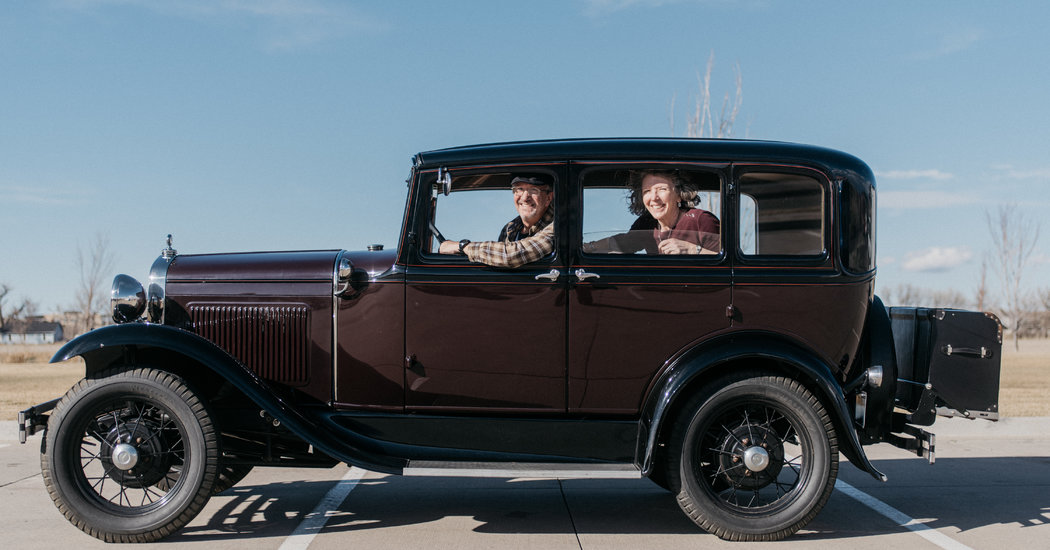 DENVER — “We’ll get this done by the end of summer.”

That was what Dan Haegert’s neighbor Bob told him one summer afternoon in 1976 in Lansing, Mich., when Mr. Haegert decided it was time to restore his father’s 1931 Ford Model A to its original luster.

The summer of ’76 would prove an optimistic deadline. Thirty years later, the work was finally done.

And neighbor Bob, well, he dropped off the project before summer’s end, said Dr. Stan Haegert, Dan’s son. Dr. Haegert, a family physician, inherited the vehicle from his father, now 87, in the early 2000s. They were reminiscing recently at the assisted-living home in Colorado where Mr. Haegert resides, about a 20-minute drive from his son’s home.

In 1968, Dan Haegert bought the Model A from his father for $1. “Dad brought it up to Michigan,” Dr. Haegert said. “Shined it up a little bit, and then you drove it as is.”

Dr. Haegert said his father had been concerned that the salt used to keep Michigan’s roads safe in the winter would corrode the vehicle. So he set upon restoring a motor buggy, which was Ford’s second blockbuster after the Model T and helped cement the age of the automobile.

About five million Ford Model A’s, not including commercial vehicles, were built in two dozen body styles between 1928 and 1931. It’s estimated that between 250,000 and 500,000 remain in running condition or are barned, boxed or garaged. The Haegerts’ is a Deluxe Slant Windshield model.

Dr. Haegert then recalled a road trip that he and his sister took with their parents with a U-Haul hitched behind the family’s 1968 Ford Galaxie to cart the automobile from their grandparents’ house in Topeka, Kan., to their home in Michigan.

“You got it back in running condition, and you used to drop us off at high school in the Model A. Which was always interesting,” Dr. Haegert said.

Mr. Haegert, who has dementia, smiled throughout the conversation, chiming in here and there, agreeing with his son’s evocative memories. He was convivial and seemed oblivious to his weakening memory when asked to recall the specifics of the project.

Mr. Haegert’s father taught him to drive the Model A when he was 14. After Mr. Haegert and his sister left the nest for college, in the 1950s, the car sat in his father’s garage for nearly a decade. At one point, to Mr. Haegert’s chagrin, his sister, Gwen, painted the car red.

When the big project began in 1976, Dr. Haegert said, his father dismantled the Model A in the backyard and created a road map of its innards. “His dad was an incredible detail person,” said Dr. Haegert’s wife, Deb, the family historian. “He would label everything, put it on a pegboard and have it all organized. He was very precise.”

Mrs. Haegert compiled a book of the automobile’s life. The car is museum quality, garaged and utilitarian. Dr. Haegert estimates its value at $15,000 to $20,000. The couple, who spent two decades as medical missionaries in West Africa, use it as a second vehicle during spring and summer to “exercise” the engine.

Dr. Haegert changes the oil himself and said the car was low maintenance. Still, he’s considering joining a local Model A club to keep the vehicle pristine. The Haegerts have two adult daughters and two grandsons; five generations have ridden in the family heirloom, which was purchased, and used, to accommodate a growing family.

“Nostalgia is what draws people into the club,” said Jim Huff, the president and a longtime member of the Model A Ford Club of Colorado. “It gives people an opportunity to share a unique perspective.”

Mr. Huff, who owns three versions of the popular vehicle, said, “Most of the older members have some experience with the Model A either through their parents’ purchase of one, when they were a child” or their own interest later in life.

During the restoration, Dr. Haegert said, his father rigging a tripod of wood in the backyard, against a pine tree, to lift the car’s body off the chassis.

Next, Dr. Haegert said, his father constructed a sandblasting cabinet in his garage. The container had two giant cutout holes filled by a pair of rubber gloves so he could insert his hands into the apparatus and shoot pressurized sand onto individual components of the skeleton: stripping away rust and old paint, getting the frame as close to bare metal as possible. He also repaired and completed metalwork on the brakes.

Mr. Haegert, who taught instrumental music for nearly 30 years, took welding classes at night at the community college in Flint, Mich. There, he learned how to fuse and repair rusted parts of the car’s exterior and replaced worn-out steel joints with new ones. The manifold heater, which draws heat from the engine into the automobile to keep passengers warm, was so badly deteriorated that Mr. Haegert built a new one from scratch. After work on the undercarriage was complete, he primed the chassis with three coats of paint.

Although the restoration was a solo project, Dr. Haegert said, his father sought advice from his fellow members at the local Model A Club. He also attended swap meets where he met other enthusiasts with whom he could trade parts and gain instruction when challenges arose.

“His persistence is what I admire the most,” Dr. Haegert said of his father’s ingenuity. “You’re a tinkerer. If ever there was a problem that needed to be solved, you would stick on that problem until you got it solved.”

Mr. Haegert also read numerous Model A restoration manuals. Father and son agree that he inherited his knack for mechanics and engineering from his own father, Lee, Dr. Haegert’s grandfather. Lee Haegert worked on the Santa Fe Railroad as an engineer, riding in “a detector car that went along and inspected the rails” for defects, Dr. Haegert said.

In 1986, Mr. Haegert and his wife moved to Arkansas to care for her aging parents. After they settled, Mr. Haegert reassembled his workshop and kept at his pet project.

He re-covered the seats, which are original, with a plush, light-brown mohair fabric used in the original manufacturing of the automobile.

Although Mr. Haegert was self-taught and resourceful, “he felt the engine work was beyond his expertise, so he hired it out,” Dr. Haegert said. He also hired out the dipping of the full body of the automobile into acid to have the old paint and rust removed and took it to a professional body shop, where it was repainted its original burgundy hue.

Dr. Haegert said his father had added some “aftermarket modifications,” including a turn signal light and an exterior trunk — an accessory that was available when the car was first built. Mr. Haegert also replaced the original electrical system, which had a generator, with an alternator to recharge the battery while driving. And he added a splash system oil filter to keep the engine clean and extend its life.

Dr. Haegert said his father had performed “90 percent” of the restoration. His mother, the family bookkeeper, kept all the receipts. The total cost to bring a classic back to life? $20,000.