A few weeks ago, they were engineers, chefs and waitresses. Now they’re farming 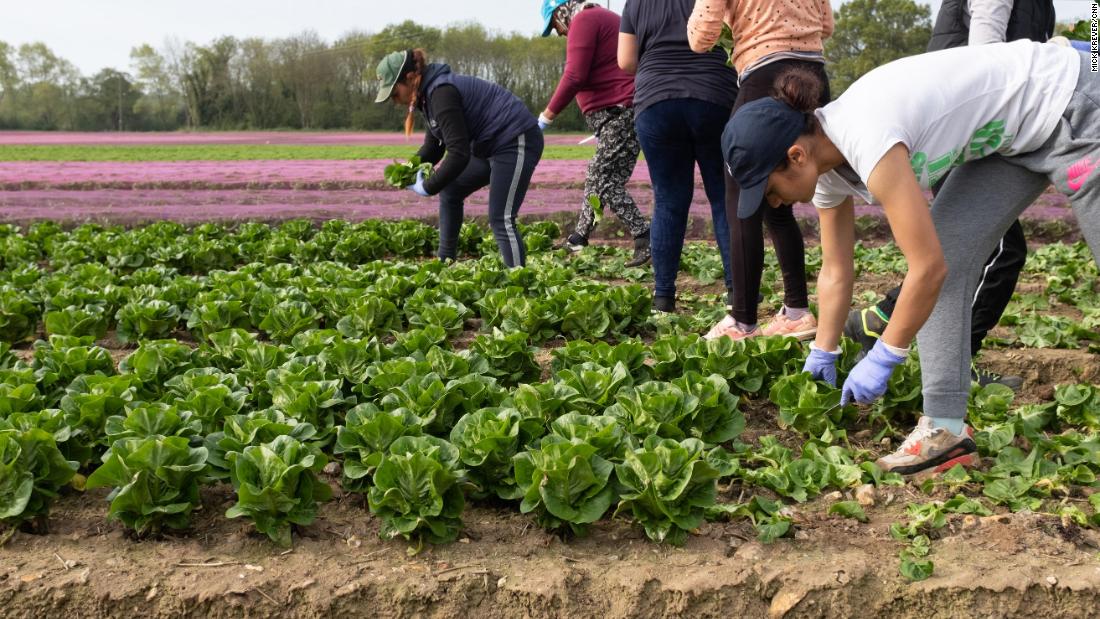 While many people hunker down at home, reloading the internet sites of grocery stores to secure a home delivery slot or dreading the socially distanced, masked visit to a supermarket, it’s easy to lose sight of the supply chain and where that food is coming from.

As Covid-19 cases surpass 180,000 in the United Kingdom, British farmers are facing spring cut off from the Eastern European migrant workers that make the harvest possible. But with thousands of Brits laid off or furloughed, the UK government now says its official policy is to try to get locals onto the fields.

“We estimate that probably only about a third of the migrant labor that would normally come to the UK is here,” George Eustice, the environment secretary and top British official on farming, said at press conference on Sunday. The government would work with farms to “encourage those millions of furloughed workers to in some cases consider taking a second job, helping get the harvest in in June.”

Back to basics. The “blitz spirit.” A nationwide effort to bind together wounds, not far off from the World War II campaign that carried the nation through the relentless German bombing campaign of 1940 and 1941.

At the crack of dawn on a farm in Kent, southeast England on Monday, a group of six women are dressed in an idiosyncratic mix of T-shirts and down jackets. Bent double at the waist, they cut lettuce after lettuce from the earth, trimming leaves and then packing them onto pallets.

Farming is complex enough in a normal year, he says. The pandemic has stranded his workforce and eliminated buyers like McDonald’s (MCD), which used to use his Apollo lettuce in its chicken wraps, when it still sold them.

Managing it all is “virtually impossible.” He doubts the farm will even break even this year.

The Betts family own the farm here, land they’ve been tilling since the early 1900s. Ottewell reckons they’re about 45 people short, and the clock is ticking. In two weeks, they have to harvest their most important crop: iceberg lettuce.

And yet without any advertising, the farm has gotten 50 unsolicited inquiries from locals seeking work, through word of mouth and stories in the Kent press.

Ottewell chose eight to come in for training. So on the last sunny day in a run of unusually fair English spring weather, a mix of young and old, male and female, gathered in an open-air conference room for a socially distanced induction.

‘An honorable thing to do’

Daniel Martin, 32, sits in a kitchenette across from a female trainer with a laptop.

Until recently, he was a civil engineer, playing a crucial role in the British construction industry. Then came coronavirus, and he was furloughed.

“With construction sites closed, a lot of the clients have ceased work,” he explains. “So it dried up for us.”

His friend worked on the farm, and Martin figured driving a forklift would be better than sitting on his couch all summer.

“I just wanted to be active, to get involved. Keep me fit, get me out of the house, otherwise we’re locked down at home. I enjoy being outside.”

Getting out and about: A running theme.

“I was fed up with being indoors, not earning any money,” said Sally Penfold, 45. “I just wanted to get out there and do some kind of work. I think providing food for the nation is quite an honorable thing to do.”

She lost her waitress job at a restaurant in Hastings, after the UK government lockdown took effect at the end of March.

“I got a job in an Italian restaurant. And I worked there for about six weeks. And then the restaurant got closed down.”

She heard about the farm through a story on local radio, while staying with a friend, and decided that tending the land would be better than being “stuck at home for weeks on end.”

He too lost his job, as a chef, to coronavirus.

“I decided basically I need to start getting active again,” he explained. “I could feel my mind maybe going a little bit. I decided I needed to reenter the world — maybe take lemons to make lemonade, I guess.”

A love of the outdoors and a fear of idle hands made farm work an obvious option, Tanswell said.

“It just fits like a glove for me. Especially this time of year. So it might be something I’d be interested in long-term as well, to be honest. It seems like such a nice place and nice atmosphere.”

The enthusiasm was genuine, and yet Ottewell looked on with nervous hesitation.

Among his chief concerns is that the new recruits won’t last, perhaps because they can’t handle the hard work, get bored or go back to their old jobs. That could be disastrous, abandoning him and his crops mid-season.

The Alliance of Ethical Labour Providers, which helps provide farms with laborers, said that about 55,000 people have expressed interest in farm jobs. How many actually went on to accept a position? Just under 150, as of April 24, the alliance says.

Ottewell would love to have a bevy of Brits fill the 45 positions he has to fill before the all-important iceberg harvest. But he isn’t hopeful.

“I’ve been working this industry my whole adult career, which is around 25 years now as a manager, and all of my experience tells me that that just isn’t going to be the case,” Ottewell said. He chafes at coverage in Britain’s tabloid media. When a large lettuce grower in East Anglia chartered a plane to fly seasonal workers from Romania in mid-April, The Sun wrote that a UK company was paying for immigrants “to show Brits how it’s done.”

“Companies like ours have relied on migrant workers for decades to have businesses. However, we’re here. And you’re welcome to come. But come and commit to us for the summer.”