A Flower Shop Reinvented to Reopen 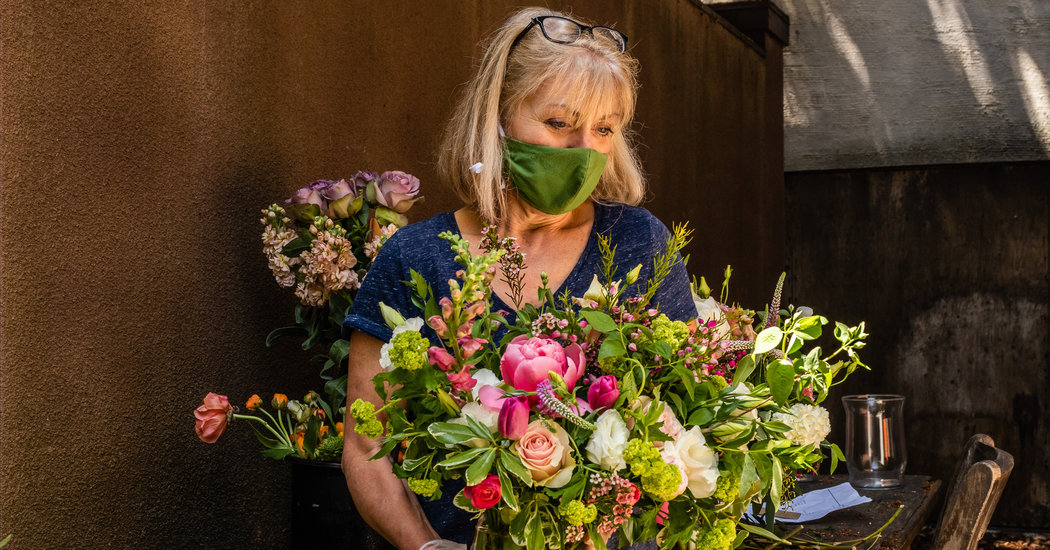 OAKLAND, Calif. — Elizabeth Wardman was driving to San Francisco’s wholesale flower market last week when she heard on the radio that California was going to allow florists to reopen for Mother’s Day as part of an easing of coronavirus lockdown rules.

By the time she got to the market at 6 a.m., the parking lot was teeming with florists stocking up for one of the busiest weekends of the year. Wisteria Rockridge, her flower shop in Oakland’s tony Rockridge neighborhood, had already received online and phone orders for the weekend. Ms. Wardman scooped up as many flowers as she could in a fit of panic buying.

A flood of delivery orders came in to the shop, three times the usual amount for Mother’s Day. But Wisteria had to stop accepting orders on Wednesday. The store had furloughed its employees and didn’t have enough people to do the work. For the rest of the week, the phone rang unanswered.

Shutting down a business for a public health emergency seven weeks ago, it turned out, was a fairly straightforward thing. Reopening? That has turned out to be a lot trickier. Like thousands of other small-business owners, Ms. Wardman has had to reinvent her shop on the fly, hoping to reach enough customers to keep at least a tiny portion of her operation alive. And she has had to navigate health rules that aren’t always easy to follow and can feel more than a little arbitrary.

She tried anyway. When the store opened on Mother’s Day, Ms. Wardman did her best to nod to the county’s rules — or not completely flout them. The metal rolling gate out front was still down, and the veranda, usually overflowing with a colorful assortment of seasonal blooms, was empty. The store was selling premade arrangements, not its hallmark custom bouquets. Customers were not allowed inside. A wooden bench blocked the doorway. For a day, at least, she ran an open-air business.

“I keep thinking I’ll get through this, and then I’ll think about how I’m going to approach the next step. Then the rules change, and so I have to make another adjustment,” she said. “It’s a very confusing time.”

Wisteria, like other San Francisco Bay Area businesses deemed nonessential, had to close its doors when Alameda County, which stretches along the east side of the bay, and six other counties imposed shelter-in-place orders on March 17. Several days later, just as all of California was following the Bay Area’s lead, Ms. Wardman furloughed all of her employees.

A native of England, Ms. Wardman, 59, who goes by Liz, moved to the United States in 1989 for a teaching job. When that contract ended, she started working in flower shops and has done that for the last 30 years. With glasses perched on top of her head, she speaks with a faint English accent and exudes the restless energy of a person with a lot to do.

When Ms. Wardman opened Wisteria in 2015, she knew that running her own store wouldn’t be easy. In the preceding three years, two other flower shops had shut down in the same space. Ms. Wardman had been an employee in both stores and knew the challenges of sustaining a business with high Bay Area taxes and expenses.

But she loved the neighborhood, and she wanted to create a “place of beauty” with an English garden aesthetic where customers could work closely with florists.

She said the store was doing “OK” before the pandemic. It wasn’t losing money, but it wasn’t making a ton of it, either. Wisteria had five full-time employees and part-time staff during busy periods. Last year, the shop generated around $750,000 in sales.

On the same block as Wisteria, other small businesses are also straining to deal with new health rules. The grocer next door, Yasai Produce Market, is allowing only five customers in the store at a time. Wood Tavern, a pricey neighborhood brasserie, is doing takeout orders while selling pantry items like sodas and ketchup. Ver Brugge Foods, the butcher, is shortening its hours because it doesn’t have enough staff coming in.

On the day her flower shop was ordered to close, Ms. Wardman did what she had done most Mondays: She woke up at 3 a.m. and headed to San Francisco’s flower market. That morning, she bought $1,600 worth of roses, tulips, ranunculus and spirea. By noon, she had heard the news of the lockdown.

At the end of the first week, she decided that she had no choice but to let her staff go. The wholesale market, her main source of flowers, was closed. (San Francisco allowed it to reopen in the week leading up to Mother’s Day.) It was unclear when Wisteria would be able to fully reopen.

A few local growers asked if she would buy some of their flowers. She had longtime customers placing weekly orders for bouquets and a handful of orders from people who heard that Wisteria might still be open. She did the arrangements and made most of the deliveries on her own.

Even though her sales were down 75 percent in April from the year before, she had a few things going for her. Her biggest cost, labor, was close to zero. She wasn’t even paying herself a salary. And her rent was based on a percentage of her sales.

For Mother’s Day, Wisteria couldn’t rely on last-minute walk-up customers as it had in the past. Fenella Fletcher, who has worked at Wisteria since its opening, built an online ordering system on the store’s website to supplement the phone orders.

On the Friday before Mother’s Day, Ms. Wardman and Ms. Fletcher, who has been a friend for 18 years and was working without pay, scrambled to build all the bouquets for Saturday delivery.

Inside, even through the filter of a mask, the air smelled like spring. A corkboard hanging on the wall had stacks of handwritten orders pinned to it. The ground was littered with loose stems, leaves and flowers that didn’t make the cut.

Ms. Fletcher worked on arrangements with industrial buckets of tulips, roses and other flowers at her feet. She stopped to fix another arrangement that she said wasn’t quite right. Too much contrast in the colors.

When customers came by to pick up their arrangements on Friday and Saturday, they slid their credit cards through an opening in the metal security gate. Flowers were handed over with an offer of a squirt of hand sanitizer.

Inside the nine-foot-wide store, maintaining social distancing proved difficult. Shelves, finished arrangements on rolling tables, empty pots and succulent plants crowded every surface. There was a narrow path to the rear where Ms. Fletcher was arranging flowers. As Ms. Wardman and others walked, they squeezed past one another like passengers in an airplane aisle. The phone rang nonstop.

A frantic Ms. Wardman scooted past, shouting to no one in particular: “Not stressed at all!”

On Mother’s Day, a sign outside the store read “Grab N Go only” with a handful of premade arrangements resting in metal buckets on the sidewalk in front of the store. An orderly line formed in front for pickup orders or last-minute flowers.

“We want her to stay in business,” said Jill Boyce, who lives nearby and was waiting for her flowers. “It’s part of my neighborhood. We all need each other.”

When customers asked for a custom bouquet, Ms. Wardman could only apologize.

“We can’t operate like we once did. Things are a little different now. I’m sorry,” she said.

It was one of many reminders that business was not back to normal and may not be for a long time. One customer tried to pay with cash, but the store was taking only credit cards. Potted orchids, another popular Mother’s Day gift, were not available. But nothing seemed to bother Ms. Wardman more than not being able to make custom bouquets.

She said she had opened Wisteria as an alternative to supermarkets and other florists with what she called “the bucket shop mentality” — premade bouquets sitting in big black buckets. “But that’s what I am doing,” she said.

As she considered the coming months, there were some grim realities. She probably couldn’t let customers inside the small shop and maintain adequate social distancing. All her wedding orders were canceled or postponed.

“It’s not going to be the same,” she said. “We can’t grow. All we can do is keep treading water.”