A huge chunk of Trump’s stock market gains are gone 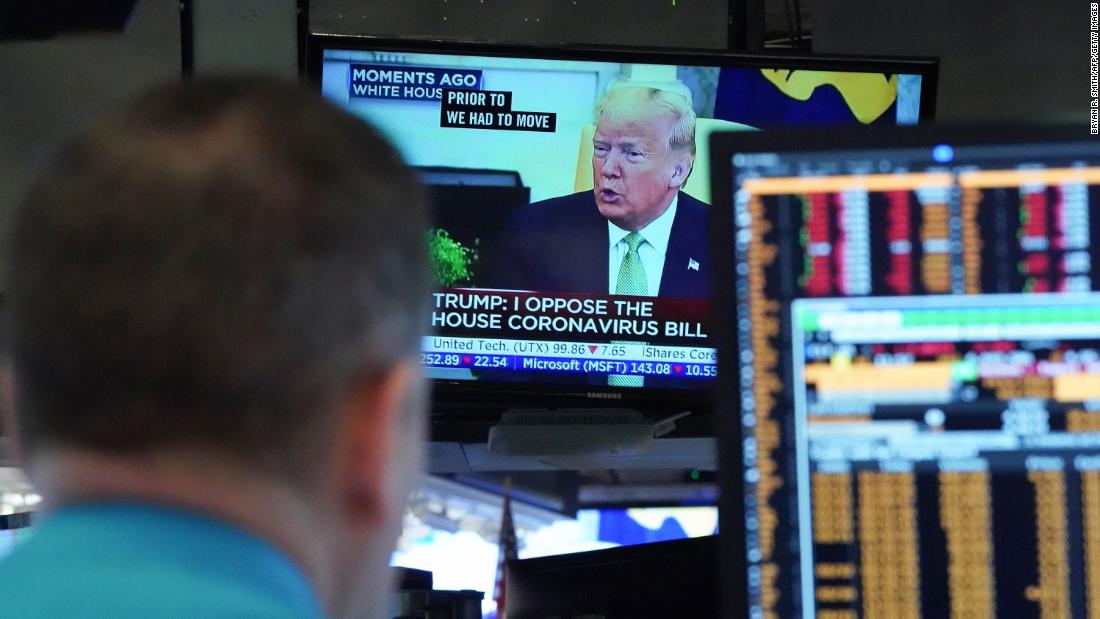 The president’s prime time speech failed to assuage fears about coronavirus. It did not outline the US strategy to test for and treat it. And two of his major points had to be walked back later.

“Stocks are cratering on the president’s remarks from the White House,” economist Chris Rupkey of MUFG Union Bank wrote to his clients.

Dow futures slid as many as 700 points when the president announced a 30-day ban on travel from Europe to the United States, including trade and cargo.

An hour later when Trump clarified his scripted speech — correcting the record that the travel ban was for foreign passengers only, not Americans, and that it didn’t include cargo — the market fell even further.

The view? The travel ban was bad enough. But the clean up showed that the administration still doesn’t have a handle on the threat or a plan.

The president “took coronavirus social distancing to the max by saying he was barring entry to the country from citizens from the European continent for thirty days,” Rupkey wrote. “Didn’t the Great Depression get started by countries putting up trade barriers between themselves and the rest of the world?”

The president also told the nation co-payments for the treatment of coronavirus would be covered by their insurance companies. Except the White House had to walk that back to say insurers were required to cover co-payments for testing only, not treatment. There was only cursory mention of expanding testing (something most Americans are concerned about) and nothing about how prepared hospitals are for surge capacity (something public health officials want to know.)

If the speech was meant to show resolve and leadership and calm markets, it was a swing and a miss.

“The psychology of this got much worse instead of better because of this speech,” says David Axelrod, who wrote speeches for President Barack Obama. Axelrod says the blueprint for an oval office address in a crisis is 1) be truthful 2) be open about the scope of the problem 3) clearly outline the plan to address it.

“The president failed on all fronts last night,” Axelrod said.

Stocks fell deeper into bear market territory at the opening bell Thursday, with the selling so ferocious, it triggered a circuit breaker to pause trading. In just 23 days, the S&P 500 (SPX) tumbled from record high to down 20% — something that took 274 days during the 2008 bear market.
On February 19, the S&P 500 was up 49% during Trump’s time in office. Now it’s up just over 10%.

Investors loved his deregulation and corporate tax cuts. His policies nursed along an aging economic expansion, pulling the Obama recovery into a new decade. But the love affair appears to be over — as seen in an 8,000 point dive in the Dow in just a few weeks.

Coronavirus is a classic “Black Swan” event: an unforeseen market surprise. Trump has no control over the event itself, only his response to it. How a president handles such events is a test of leadership, teamwork and messaging.

Economist Mohammed el-Erian says a global recession is “very, very likely” and that the US response needs to be more robust.

“It has to come across as a whole-of-government approach. There is a conductor, everybody in the orchestra knows what they’re doing, and they’re coordinated,” says el-Erian, chief economic adviser at Allianz.

“Day one is about stress, things like free testing, covering the uninsured, paid emergency leave, paid medical leave, strengthening unemployment insurance,” el-Erian says. “Phase two is about following that up. Once you’ve built the bridge, the immediate bridge, with well-focused stimulus and infrastructure spending that promotes long-term growth.”

The White House has waived the tax filing deadline for most individuals and deferred taxes for affected businesses. And Congress has passed an $8.3 billion emergency funding package that provides money for testing and funds for community health.

“A payroll tax cut looks unlikely…but embarrassed lawmakers may pass a modest bill in the next couple of days that would aid virus victims and help small businesses,” Valliere wrote in a note to clients. “Whether a House-Senate conference committee can agree quickly on this bill is unclear, but there’s a growing chance of a compromise by tomorrow.”