A New Weapon Against Climate Change May Float 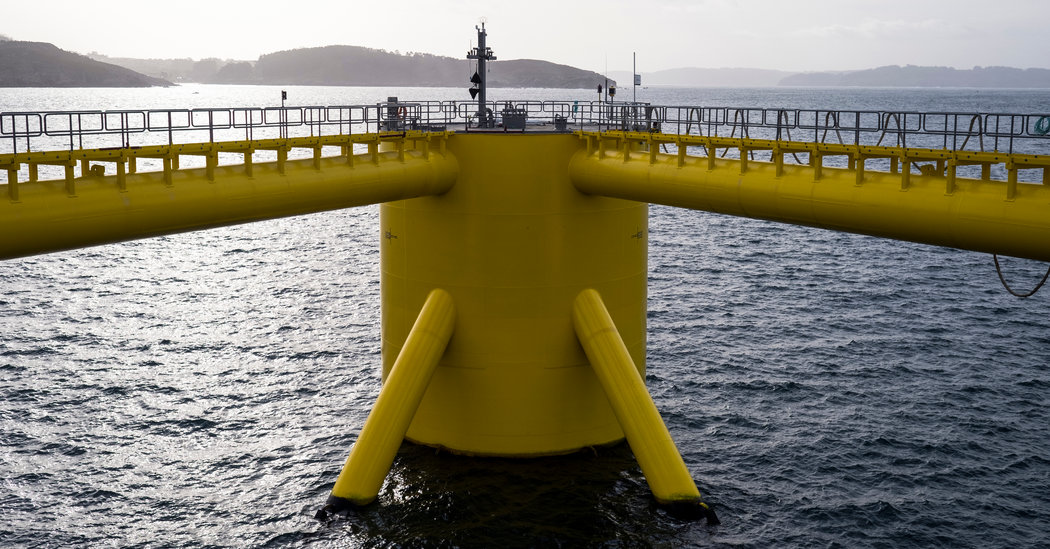 FERROL, Spain — A strange-looking contraption that could represent a new frontier in clean energy wallowed in the water alongside a coal dock here in a bay in northwest Spain.

This floating windmill with a tower about 600 feet high was sheltering in the harbor. After waiting out the rough winter seas and the disruption from the coronavirus pandemic, it was towed in late May to join two others anchored in the Atlantic in 330 feet of water 11 miles off Viana do Castelo on the northwest coast of Portugal.

The idea is to try to stake out a vast new area of the oceans for the wind power industry. Generating electricity from wind began on land, but developers, led by Orsted of Denmark, started venturing into the sea in the early 1990s as they sought wide-open spaces and to escape the objections of neighbors to having a twirling monster next door.

Three decades later, offshore is now the fastest-growing segment of the wind business, but marine wind farms have been limited to water shallow enough to allow turbines to sit on piles or other supports on the sea bottom. About 200 feet in depth is the outer limit for such devices, people in the industry say.

If platforms could be put almost anywhere at sea, “we can go to areas where we have never before harnessed the wind,” said José Pinheiro, the project director of WindFloat Atlantic.

Mr. Pinheiro’s machine floats on three partly submerged columns, each about 100 feet long. Steel catwalks bridge the gaps between the giant cylinders. Sensors signal to pumps to add or remove water from the columns to keep the platform at the right level for optimal wind generation. In a gentle sea in the bay, the vessel, which weighs thousands of tons, seemed remarkably stable.

In a conversation in the port’s office building, Mr. Pinheiro said that putting turbines on floating platforms would allow wind developers to follow the lead of the oil industry, which routinely drills in water a mile deep. That would open markets like the West Coast of the United States, France and South Korea.

Most offshore wind farms have been installed off countries like Britain, Germany, Denmark and China, which have large expanses of shallow water extending from their coasts.

Offshore wind has surged over the last three decades as turbines have become larger and more powerful, bringing down costs. While still representing less than 1 percent of world electricity generation, offshore wind grew at nearly 30 percent per year over the last decade and has become a major factor in power generation in northern Europe.

How large a weapon in the battle against climate change could this industry become? Analysts at the International Energy Agency, a Paris-based group, estimated that if floating technology were widely adopted, the industry would have the technical potential to eventually supply the equivalent of 11 times the world’s demand for electric power. Electricity generation is both a source of emissions and a potential means of reducing them. Many analysts say that powering everything from cars to factories with clean electricity will need to play a big role in achieving climate goals.

Of course, the pandemic will likely slow investment decisions in the coming months, and there are obstacles to the deployment of the new devices, including perfecting the technology and persuading governments to open large portions of their waters to developers.

Recent experience has already shown that offshore wind is attractive to investors like pension funds because the multibillion-dollar projects offer predictable returns and contribute to the battle against climate change.

Big Oil is also moving into offshore wind for some of the same reasons. The companies, especially in Europe, have been coming under increasing pressure from governments, environmentalists and investors to shift their activities away from emissions-causing oil and gas to clean energy like wind. In addition, these companies see similarities between this emerging industry and their own giant, deepwater oil projects.

One of the project’s investors, Repsol, a Spanish oil company, has made ambitious pledges to reduce its carbon emissions and is scouting for the means of achieving them.

“The main reason here is to be involved in a project that is cutting edge,” said María Victoria Zingoni, the company’s executive managing director of commercial businesses and chemicals. “We want to test it and learn from it.”

The wind farm being installed off northwest Portugal makes use of some of the largest available turbines. These machines, supplied by a joint venture of Vestas Wind Systems of Denmark and Mitsubishi Heavy Industries of Japan, are enormously powerful with blades more than 260 feet long. The three platforms will generate enough electricity to light up a city of 60,000 people, Mr. Pinheiro said.

The Portugal project marks the second stage of a long campaign to design a floating machine that can compete with other energy sources. A smaller platform was successfully tested in Portuguese waters in 2011. Equinor, a Norwegian energy company, opened a platform in the North Sea in 2009, operates a small floating wind farm off Scotland and has plans for others.

These early projects have overcome doubts about whether a wind turbine hundreds of feet high could function smoothly on a base heaving and yawing in rough seas.

“We don’t need to demonstrate that floating offshore wind is viable, because Principle Power and Equinor have demonstrated that a long time ago,” said Henrik Stiesdal, a wind pioneer, who is working on his own floating platform with backing from Royal Dutch Shell and Equinor. Principle Power, a California-based company, designed the WindFloat platforms and owns a small stake in the project.

An important step, said Finn Gunnar Nielsen, who helped design the Equinor floater, was to design controlling software for the turbine that would compensate for rather than exacerbate the motion of the platform.

What remains is to determine which of several design concepts being developed make sense and how to build what will need to be hundreds of platforms quickly and cheaply, industry sources say.

“It will take another five years to get there, ” said Dominique Roddier, a naval architect and former Exxon Mobil employee, who developed the WindFloat concept with colleagues at Principle Power. Mr. Roddier left the company last fall and is now running the start-up Ocergy that aims to produce buoys for gathering data on weather, whales and fish.

WindFloat, whose cost was pegged in 2018 at 125 million euros, or about $137 million today, is majority owned by EDP Renewables.About €60 million came through a loan by the European Investment Bank, a wing of the European Union, which supports what it considers to be promising renewable technologies.

By comparison, turbines of similar size installed on the sea bottom cost around €20 million each when they are used in large facilities in which the costs can be spread among scores of machines. The new technology still “has a long way to go on the economics,” said Alexander Flotre, an analyst at Rystad Energy, a market research firm.

WindFloat ran into delays and cost overruns as local shipyards building the platform struggled, pushing its installation into winter when the seas were too rough to tow it out of the port. The pandemic has added to the delays.

Mr. Pinheiro also said that the computer systems designed to keep the two platforms balanced took longer to fine-tune than expected. The two platforms that are installed are hooked up to the Portuguese grid and earning money.

João Metelo, chief executive of Principle Power, said that the eventual aim was to build much larger wind farms to bring down costs through streamlining the design and economies of scale.

Mr. Metelo said that wind farms of this size would likely generate electricity at a cost of around €200 per megawatt-hour, a wholesale power measure, over their lives, which may extend to 25 years. He estimated that with far greater scale and even larger turbines expected on the market in the future costs could come down to the €50 range, which is competitive with turbines attached to the bottom.

Mr. Stiesdal, a former chief technology officer of Siemens Gamesa, the largest maker of offshore turbines, said that windmill builders had slashed costs by building the huge machines in factories in components that could then be assembled by crane at dockside or at sea. Floating platforms will need the same kind of industrial process, he said. “Ultimately, you get to a point where you realize that the only way forward is factory-made equipment,” he said.

It is not hard to imagine that a time will come for these projects. Developers are already building conventional offshore wind farms with 50 times the generating capacity of this floating pilot. Orsted, a Danish company that has become the largest offshore developer, is building a series of wind farms in the North Sea off northeast England with generating capacity comparable to nuclear power stations.

Eventually, it will make sense to move farther out and deeper, said Mr. Nielsen, a designer of the Equinor floater who is now director of the Bergen Offshore Wind Center at the University of Bergen in Norway. Stronger and more consistent wind is available further at sea. Having more spots to choose from should also provide more leeway to reduce potential conflict between fishing interests and the wind projects.

“If the wind industry is going to expand,” he said, “they really have to move into deeper water.”