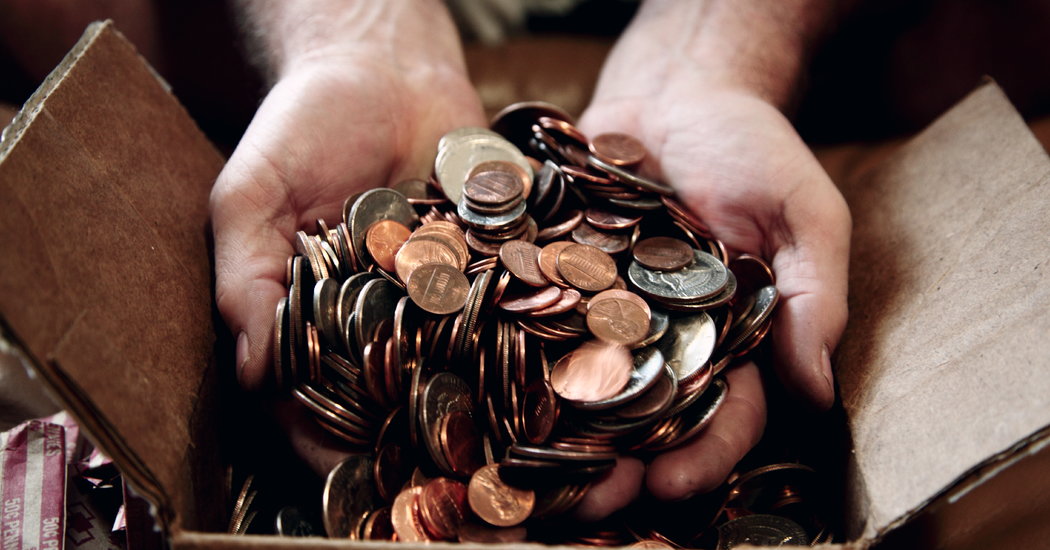 WASHINGTON — Randy Graham, the chief executive of the First National Bank of Tennessee, was surprised to learn in mid-June that the Federal Reserve would not be filling his entire order of pennies, nickels, dimes and quarters.

The reason: The nation’s coin supply was coming up short.

In the latest indication of how the coronavirus is disrupting life in unexpected ways, the flow of coins has become gummed up as consumers stayed home and avoided touching physical cash. In particular, customers have not been dumping their piggy banks into kiosks at grocery stores in exchange for bills.

As the country has begun to reopen, the supply of coins has failed to keep up with renewed demand for a type of currency that, even in an increasingly digital world, remains essential to business.

“Many businesses are dependent on the coin — they don’t need the disruption,” Mr. Graham said. He was told that his allocation would be cut drastically, to less than half of its usual total. Mr. Graham received about 40 percent of his usual order this week, and expects that to persist into early July.

“If this lasts any length of time, there’s no question that we’ll be looking at our customer base and saying, ‘Sorry, don’t have it,’” he said.

Even as digital payments become more of the norm in America, change remains crucial to some parts of the economy: Parking meters, vending machines, amusement parks and even campground showers have kept coins in regular use.

The U.S. Mint manufactures America’s coins, and the Federal Reserve distributes them across the country. As typical coin circulation has been disrupted by the pandemic, those institutions have had to change their normal practices to solve the problem, with the Fed allocating coins to banks based on their historical order sizes and the Mint ramping up new coin shipments to pump fresh supply into the system.

“What’s happened is that with the partial closure of the economy, the flow of coins through the economy, it has gotten all — it’s kind of stopped,” Jerome H. Powell, the chair of the Fed, told lawmakers while testifying on Capitol Hill last week. “We’ve been aware of it, we’re working with the Mint to increase supply, we’re working with the reserve banks to get the supply to where it needs to be.”

Treasury Secretary Steven Mnuchin said on Tuesday that he believed the shortage would be solved. He noted that the staff at the Bureau of Engraving and Printing worked throughout the lockdown to ensure that cash was delivered to the Federal Reserve so it could be distributed to banks.

“As it relates to coins, so many businesses shut down, a lot of coins got stuck in the system, so we are a little bit far behind on coins,” Mr. Mnuchin said at a virtual investment summit sponsored by Bloomberg. “But I know they are redoubling their efforts and that will work out fine.”

The Fed began to ration its coin supply on June 15, giving banks a portion of their requested change supply depending on what they had historically requested, among other factors, a move that the central bank says is a “temporary measure.”

The strategy will remain in place as long as necessary, a Fed spokeswoman said Wednesday, pointing out that change needs to begin circulating through commerce for things to go back to normal.

“The coin shortage has been mainly caused by coins not re-entering distribution,” Michael White, a spokesman for the Mint, said in an emailed statement. “With businesses opening back up, we expect that the situation will improve as Americans return their coins to banks or recycling machines for redistribution.”

Coin shipments are also ramping up, he said, as the Mint puts safeguards into place so manufacturers can work safely. Facilities in Denver and Philadelphia returned to full production staffing levels on June 15 after reducing employees per shift earlier in the pandemic, he said.

The Mint will ship 1.2 billion coins during June, Mr. White said, and is on track to increase that to to 1.35 billion coins every month for the rest of 2020. Typically, the number is close to 1 billion per month.

Still, there’s a risk that the crunch in cold hard cash in the United States could touch off literal penny hoarding as businesses become nervous that they will not get the coins they need to make change for customers.

Mr. Graham in Tennessee said that he had been able to meet all ordinary business requests for change, but that some customers had asked for several months’ worth of coins to protect against a shortfall. He has not filled those requests.

The coin shortage could renew the debate about the fate of the penny, which has faced calls for abolition because its purchasing power has fallen and its cost of production has eclipsed its value.

For now, the disruption is expected to blow over.

“There’s plenty of coin out there. It’s just not making it to the right place at this point,” Jim Gaherity, the chief executive of Coinstar, said on CNBC this week. His company, which has kiosks that take consumers’ coins in exchange for bills, recirculates $2.7 billion worth of coins annually, he said. “We need to get it back into the system.”

Cash in circulation in general has continued to expand in the United States even as digital options become increasingly prevalent. As of June 10, there were $1.91 trillion worth of Federal Reserve notes were in circulation, based on central bank data. That has climbed significantly in recent years, as $100 bills in particular have been in demand.

Precautionary cash hoarding has skyrocketed in some coronavirus-hit economies, including the United States and Italy, the Bank for International Settlements — a financial institution that serves central banks — found in a new report out Wednesday. Even so, the institution suggested that the pandemic, which has also spurred an increase in contactless card transactions, could actually accelerate the shift toward digital payments, and away from paper cash and the newly scarce quarters and pennies.

“The Covid-19 pandemic has highlighted both the progress achieved and the remaining shortcomings in payments,” according to the report. “The crisis has amplified calls for greater access to digital payments by vulnerable groups and for more inclusive, lower-cost payment services going forward.”