A Scramble for Virus Apps That Do No Harm 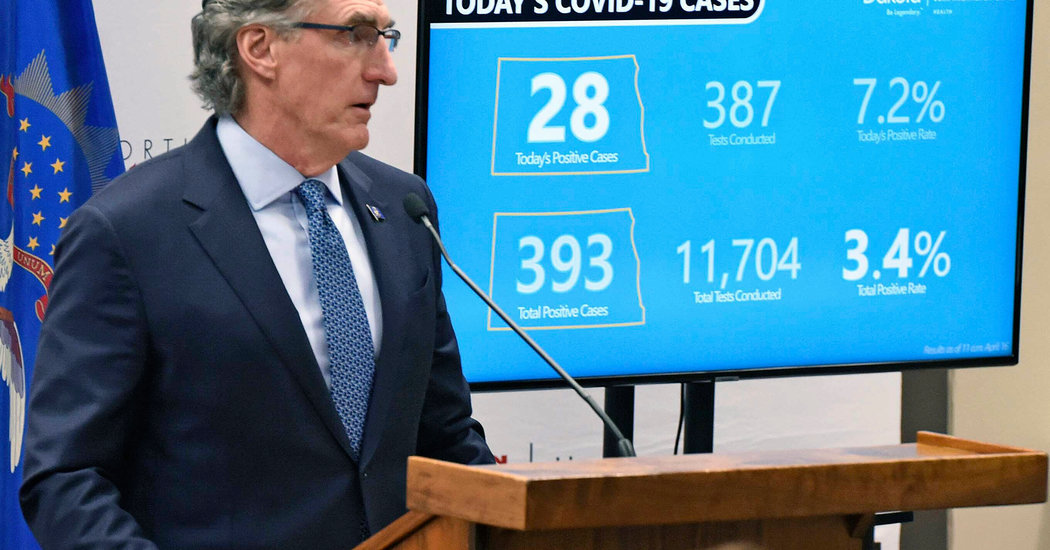 Faced with a growing coronavirus threat, the governor of North Dakota last month posed a question to a friend from his private-sector days. The friend, a software engineer, had once created a location-tracking app for football fans at North Dakota State University who liked to meet up when traveling to big games.

“Can you track people for Covid?” asked the governor, Douglas Burgum. Within days, the engineer, Tim Brookins, had reworked the football app to do just that, he recalled in an interview. The app is now being used in North and South Dakota as part of statewide efforts to ramp up contact tracing for people infected with the coronavirus.

The new app is part of a worldwide scramble to deploy smartphone tools to rein in the pandemic. If the virus’s path can be tracked, even predicted, the hope is that more people will be able to resume at least part of their normal routines — and fewer will need to confine themselves at home.

At their core, the apps are intended to gather information about the movements of people who have tested positive for the virus, alert others who might have crossed their paths, and in some cases make sure infected people stay quarantined. They use smartphone technologies, such as GPS and Bluetooth, to collect and share the data, which make them agile and easy to use but also provide an enticing target for hackers or government surveillance.

Several dozen countries, states, universities and companies are racing to develop and begin using the digital tools, which public health experts said could improve person-to-person contact tracing but are not a panacea. The mad dash has left some places with a confusing mishmash of options, and has some computer security researchers worried about vulnerabilities in hastily written software.

There is no evidence that the apps will be effective without widespread testing for the virus and without enormous numbers of voluntary participants, which could be hampered by years of privacy scandals involving both governments and companies.

Aware of the problems, Apple and Google announced this month they were creating software that public health authorities could use to make apps. The tool will allow different apps to work together and has the support of many privacy experts. But several technology law scholars expressed concern that even well-intentioned digital surveillance tools could become problematic and are difficult to withdraw.

“We’ve already learned what moving fast and breaking things can do to society,” said Woodrow Hartzog, a professor of law and computer science at Northeastern University, referring to the negative consequences of a tech mind-set that values speed and disruption above all else.

Only 25,000 people in North Dakota, about 3 percent of the population, have downloaded the state’s app, which before last week was available only for iPhones. Last month, Singapore introduced a voluntary contact-tracing app, but only about 1.1 million people — 20 percent of the population — have downloaded it. Norway’s app has caught on more quickly, with nearly 30 percent of residents signing up for it since it was released about a week and a half ago.

Still, a recent study by epidemiologists at Oxford University estimated that 60 percent of the population in a given area would need to use an automated app that traces contacts and notifies users of exposure, combined with other tactics such as broader testing and the quarantining of the most vulnerable people, for the app to contain the virus.

While some compliance is better than none, the researchers found, low rates of adoption in many areas suggest voluntary programs may not provide a breakthrough.

“With 10 percent, 20 percent, 30 percent uptake of the app, you get a progressive reduction in the size of the epidemic,” said Christophe Fraser, an expert in infectious disease dynamics and control at the Big Data Institute at Oxford, who has advised Britain’s National Health Service on an app it is developing.

Despite the uncertainty, some health experts say the virus spreads so quickly and stealthily that there is an urgent need for new mechanisms to combat it. Even with partial participation, for example, the apps can allow traditional contact tracing to focus on people without phones, who are often poorer, older and more vulnerable. Only about half of Americans age 65 or over have a smartphone.

“Automated contact tracing is a big idea, an ambitious idea,” said Dr. Louise Ivers, the executive director of the Center for Global Health at Massachusetts General Hospital in Boston, who has been working with a team at M.I.T. to develop contact-tracing technology. “But it’s important to be ambitious right now.”

On the Trail of the Pandemic

The proliferation of coronavirus apps has trailed the spread of the pandemic around the globe. Often, the differences among apps are technical ones but can create vast differences in their security, privacy and effectiveness.

In February, China began requiring residents in more than 200 cities to download a health code app that automatically dictates whether people must quarantine. Location data is sent to the government from the phones, but it is unclear how the quarantine decisions are made.

By contrast, Singapore’s app uses Bluetooth rather than location data to identify nearby phones, and the information is stored on the phones unless a person tests positive for the virus and agrees to share the data with contact tracers, who can then notify others who may have been exposed.

In Norway, the app sends data from the phone’s GPS and Bluetooth to central servers that can be accessed by government health authorities. A new law mandates that the information be used only for the pandemic, and that it be deleted every 30 days.

Tora Sanden Doskeland, a graduate student in Norway, said she had downloaded the app despite her concerns about governments and corporations that collect data on people.

“I’m not an expert in this disease or technology or law, but I trust people who are, and I believe the government is relying on them when it tells us to make this choice,” she said. “There are pros and cons, but we need to do something together.”

North Dakota’s app, Care19, uses Wi-Fi, cell towers and GPS to gauge people’s locations, usually within about 175 feet, making it much less accurate than Bluetooth-based apps. This means it is now useful only to help patients tell contact tracers where they were while they were contagious.

An analysis by The New York Times confirmed that the app sends people’s location data to a private server hosted on Microsoft’s cloud platform. Mr. Brookins, the developer, said only he and one other person have access to the server, and health officials can get the data only of people who test positive for the coronavirus and then agree to share it.

India, which, like the United States, is relying on a combination of state and federal efforts to tackle the pandemic, is a case study in the rush for new technologies.

Another app, called Quarantine Watch, in the state of Karnataka, also records the locations of certain people under quarantine and requires them to take selfies to prove they are staying home.

In an effort to coordinate public health surveillance, the central government of Prime Minister Narendra Modi introduced its own contact-tracing app in early April. The app, called Aarogya Setu — or health care bridge — uses smartphone location data and Bluetooth to log people’s travel routes and the other phones they encounter. With urging from Mr. Modi, more than 77 million people, about 5.6 percent of the population, have downloaded it so far. Local authorities are now promoting the Modi government’s app along with their own.

An expert advising the Modi government on its app said it had already helped public health monitors pinpoint hot spots for the virus and speed their door-to-door visits to certain neighborhoods to alert residents, many of whom did not own smartphones.

“They just pilot it out, see how it works and, as the debate is taking place, they scale the project — and once it’s scaled, then it becomes a lot harder to roll back,” said Sidarth Deb, the policy and parliamentary counsel for the Internet Freedom Foundation, a digital rights group in New Delhi.

An analysis by The Times found that the Quarantine Watch app, which is available on Google Android, lacked common security measures, and that the Android version of the Aarogya Setu app leaked a user’s latitude and longitude to a YouTube server.

Google, which owns YouTube, said that the Aarogya Setu app appeared to have sent the location data inadvertently and that YouTube would delete it. The app developers said on Sunday they had fixed the problem. An official in Karnataka said that the app used essential security measures and that the issues identified by The Times had been resolved.

The wide range of efforts, and their varying quality, have led to calls for industry standards related to privacy and other matters.

Whether to send data to central health authorities is the biggest sticking point.

Technologists who focus on privacy say the best way to prevent governments from using data to surveil people is to never let them have it in the first place.

“You can look at what happened after 9/11,” said James Larus, the dean of the School of Computer and Communications Science at EPFL, a science-focused university in Switzerland. “There were all these consequences for privacy made possible by a crisis.”

But centralized collection of the data may be essential for effective contact tracing, others argue.

“Having location history helps you better identify where infections might be, helps you identify the hot spots,” said Lalitesh Katragadda, the founder of Indihood, a group developing technologies for underserved populations, and an adviser on the Indian government’s app.

Some officials in Europe have said they also want information about nearby phones to be shared with public health officers, so they can then contact those people personally.

The Apple and Google program, which draws on ideas from Singapore and from academics, aims to answer the question in favor of privacy experts. The app software will keep track of nearby phones using secret codes, but the data will stay on users’ phones. When people test positive for the coronavirus, they can allow their own codes to be put on a list. The phones of all other users will regularly check that list and provide an alert if there is a risk of infection.

So far, the companies have refused to change their system to allow governments to collect data about people’s contacts, and it is unclear whether the gathering of more general location data will be possible. On Friday, the companies changed the name of their system — to “exposure notification” from “contact tracing” — to underline its focus on directly alerting people.

Another point of contention surrounds how virus symptoms are reported. Should people voluntarily self-report, or should health workers do so after confirming a diagnosis?

And some significant technological questions need to be worked out, including making sure that the Bluetooth detection accounts for when people are separated by walls and that the apps do not drain batteries or interfere with headphones. Engineers working on programs at M.I.T. and Stanford said they thought the problems were surmountable.

A key to making the apps successful, proponents said, is persuading people that the apps will help keep them safe and allow them to emerge from lockdowns.

“When you hear people saying there will never be takeup of the app,” said Dr. Fraser, the Oxford epidemiologist, “they are talking like we are not in the world we are currently in.”