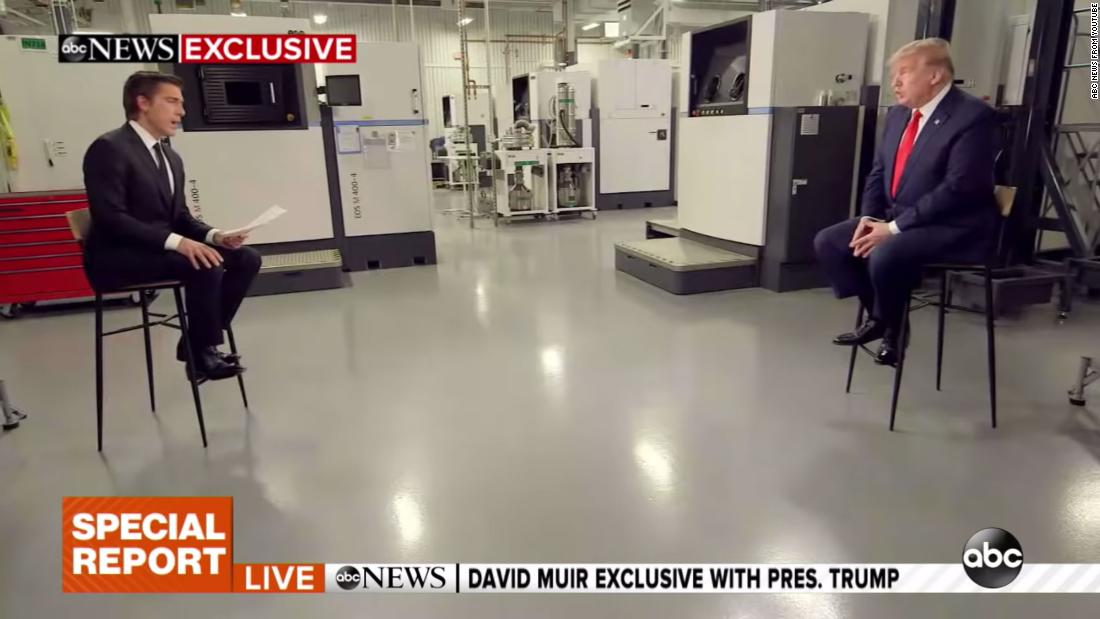 When he sat down to interview President Trump, David Muir had an enormous responsibility on his hands. Muir had been granted Trump’s first television interview outside the Fox-verse since the coronavirus pandemic upended American life.

The interview came as the US death toll passed 71,000 in the United States. It came as White House economic adviser Kevin Hassett said the April jobs report could show an unemployment rate of 20%. And it came as news emerged that the Trump administration was phasing out the coronavirus task force despite evidence the virus is still ravaging the country.

It also came as Trump spent the preceding day unhinged on Twitter. He rage-tweeted about George Conway (“deranged loser” and “moonface”), floated a murder conspiracy theory about Joe Scarborough, denounced the “Fake News Lamestream Media” (“doing everything possible to hurt and disparage our Country”), and took time out of his day to laud the ratings of Fox News host Greg Gutfeld.

Muir’s interview was an opportunity to prosecute Trump on these issues and his conduct amid the crisis. It was an opportunity to ask him important Q’s and hold his feet to the fire in a way that isn’t done on Fox and can’t be done in the briefing room. But Muir missed. The interview didn’t elicit any big news. Muir didn’t challenge Trump in any meaningful way. And worst of all, Muir allowed the President to float brazen misinformation with no pushback to his 10 million+ viewers.

Here’s an example: Muir asked Trump whether Americans will have access to testing as they head back to work. Trump said “they should have no problem,” an answer Muir simply accepted. Trump then bashed President Obama, claiming that he had inherited “broken tests” from him. Muir didn’t push back on the this falsehood, only asking Trump what he had done during his term to stock the shelves. Trump told Muir that he had “a lot of things going on” in his first three years, claiming he had been impeached for a “total hoax.”

Apparently Muir didn’t find that answer — or lack of an answer — worth interrogating in any way. Instead of grilling Trump further on why he didn’t prepare for a pandemic or pointing out that the Ukraine scandal wasn’t a “total hoax,” Muir took the answer and moved on.

To see Trump float brazen misinfo to Muir and watch him accept the answers was… disappointing to say the least. As CNN’s Daniel Dale noted, “A thing about Trump is that he tells the same lies over and over. I have no expectations for ‘interviewers’ from Fox, but it’s not that hard for others who get to talk to him to come prepared and willing to respond with facts.” Unfortunately, Muir failed to meet the moment.

Trump emerges from the Fox-verse

While Muir’s interview left a lot to be desired, it was evidence that Trump is beginning to carefully emerge from the Fox-verse. Last week he spoke to Reuters. On Tuesday, the New York Post published an interview with him. And, of course, Muir sat down with him for the Tuesday evening interview on “World News.” It seems to be a clear effort to put the President in front of a swath of the country that does not watch Fox News.

That said, while Trump is doing interviews with non-Fox press, it’s notable who he is choosing to do them with. If I had to guess, he’ll continue to avoid tough interviewers like George Stephanopoulos or Jake Tapper. It’s a smart strategy for the White House. They’ll put Trump in front of big network audiences that reach crucial independents, while simultaneously being able to say that they are not only appearing on Fox…

Speaking of the New York Post’s interview with Trump… Trump lamented to the Murdoch-owned tabloid about CBS News correspondents Paula Reid and Weijia Jiang, saying that they aren’t like Donna Reed, the actress who played a ’50s housewife on TV. Both Reid and Jiang fired back at Trump on Twitter. “Fact check: True,” Reid tweeted. Jiang noted that Trump has told her to be “nice and easy” three of the four last times she has asked him a question.