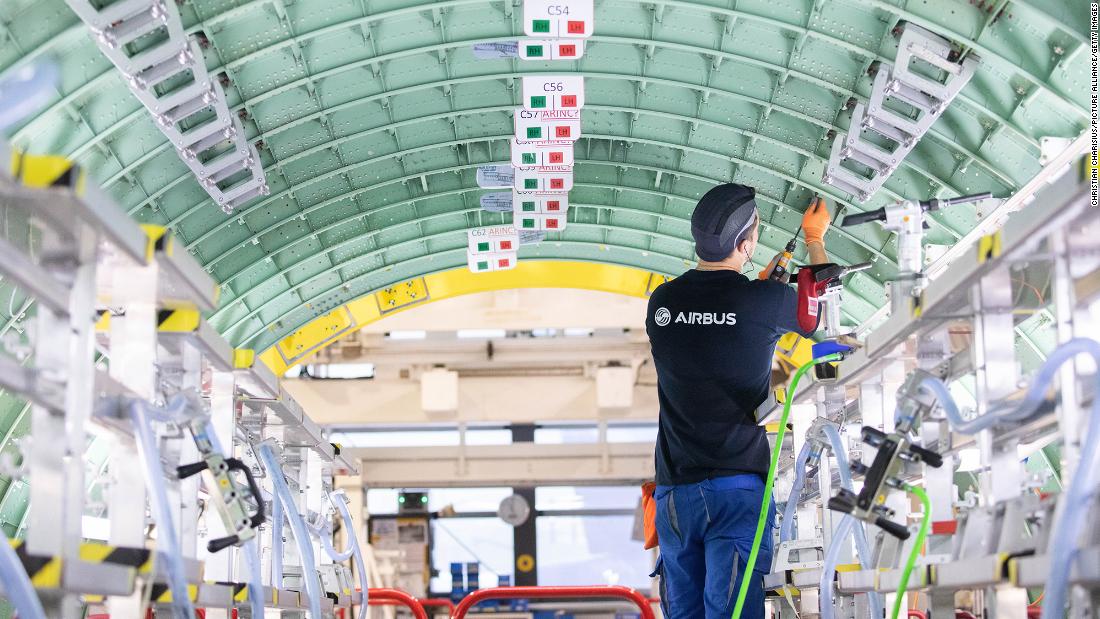 The company said in a statement on Tuesday that it was responding to a 40% drop in activity in its commercial aircraft business in recent months, and expectations that the recovery will be slow.

“Airbus is grateful for the government support that has enabled the company to limit these necessary adaptation measures,” it said. “However with air traffic not expected to recover to pre-Covid levels before 2023 and potentially as late as 2025, Airbus now needs to take additional measures to reflect the post Covid-19 industry outlook.”

Airbus (EADSF) is at the heart of the European aviation industry. Based in France but with production facilities in Germany, Spain and the United Kingdom, the company has 134,000 employees around the world and competes with Boeing (BA) to supply planes to airlines.

The job losses will fall most heavily in France and Germany, with about 5,000 positions going in each country. The United Kingdom will lose 1,700 jobs, Spain 900 and the remainder will be cut at other sites around the world.

The company said it would try to reduce the number of layoffs through voluntary departures, early retirement and long-term partial employment programs.

“Airbus is facing the gravest crisis this industry has ever experienced,” CEO Guillaume Faury said in the statement. “The measures we have taken so far have enabled us to absorb the initial shock of this global pandemic. Now, we must ensure that we can sustain our enterprise and emerge from the crisis as a healthy, global aerospace leader, adjusting to the overwhelming challenges of our customers.”

The plane maker secured a €15 billion ($16.9 billion) credit facility in March to help bolster its position as the pandemic swept across Europe. The French government, which has pledged $17 billion to support the aviation industry, has brought forward military orders for Airbus refueling tankers and helicopters.

Airbus has so far avoided a government bailout, but it does need to save money. The company burned through €8 billion ($9 billion) in cash in the first quarter, including €3.6 billion ($4 billion) in penalties tied to corruption investigations in Britain, France and the United States. Its net loss was €481 million ($518 million).

Many of the airlines that buy Airbus planes have been hurt badly by the pandemic.

The global airline industry will lose a record $84 billion this year, according to the International Air Transport Association, which does not expect a return to profitability in 2021 even if there is a sharp rebound in global economic activity.

Companies that supply parts to Boeing and Airbus are also being forced to cut costs and slash jobs as demand for their products fades. The same is true of airport operators, and businesses that handle baggage and provide other services to airlines and travelers.

Boeing, which was already reeling from the grounding of the 737 MAX before the pandemic arrived, has so far avoided a US government bailout by raising $25 billion through a bond offering. But the US company is slashing its workforce by 16,000 jobs to cut costs amid the pandemic.