Alas, Poor New York: Shakespeare in the Park Is Canceled 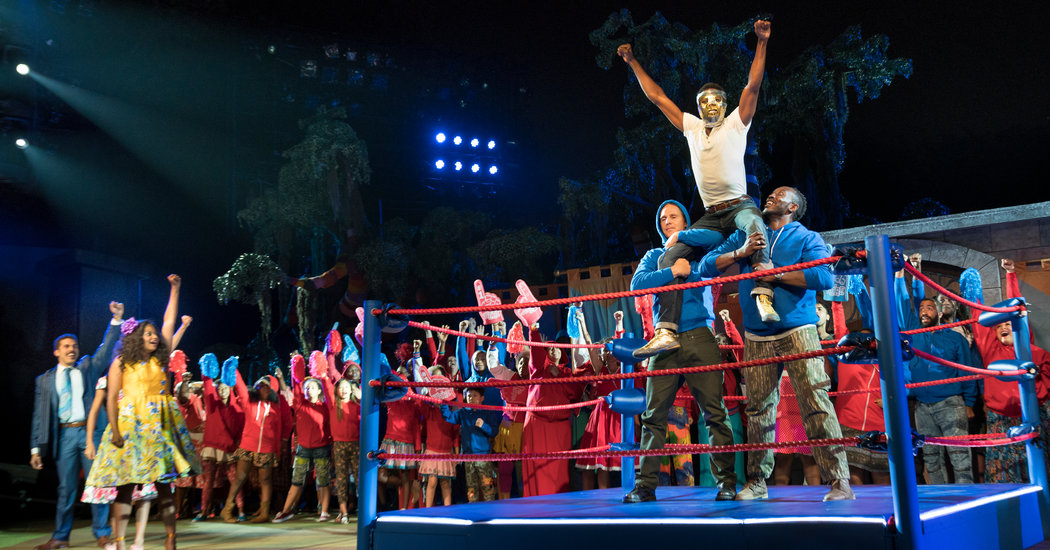 Free Shakespeare in the Park, a treasured rite of summer in New York, will not take place this year because of the coronavirus pandemic.

The annual festival, staged as the sun sets in an open-air amphitheater surrounded by trees, is just too big and too soon to pull together at a time when no one knows when large gatherings will be permitted again.

“This is something I mightily resisted,” Oskar Eustis, the artistic director of the Public Theater, which founded and runs the festival, said in an interview. “But it’s just clear to us at this point that there’s no way we can responsibly prepare, build and rehearse to get shows open in a timing that might match the quarantine’s timing.”

The pandemic has forced the cancellation of programming and taken a huge financial toll at arts institutions around the world. Even as elected officials begin to discuss whether and how it might become safe to restart the economy, major summer events — including, in the theater world, the Edinburgh festivals, the Oregon Shakespeare Festival and the Williamstown Theater Festival — have already been called off.

Shakespeare in the Park, which has been performed for free at Central Park’s Delacorte Theater since 1962, was to include two shows this season: a new production of “Richard II,” directed by Saheem Ali, which was to have begun May 19; followed by a musical adaptation of “As You Like It,” directed by Laurie Woolery, that had a brief run in 2017 as part of the theater’s Public Works program.

The composer Shaina Taub, who wrote the songs for the adaptation and has worked on several summer shows at the Delacorte, said “It’s the right decision, but it comes heavy.”

The Public — birthplace of “Hair,” “A Chorus Line” and “Hamilton” — is more financially stable than many nonprofits, with a $60 million annual budget, a national reputation and well-heeled donors. And the commercial success of “Hamilton” has been a boon, strengthening the theater’s cash reserves.

But the pandemic has prompted the Public to cancel seven shows scheduled to run over the spring and summer, as well as all in-person artistic events and programming at its cabaret space, Joe’s Pub. The organization is estimating that the lost box office revenue — combined with an expected, and significant, drop in philanthropic contributions — will create a $10 million to $20 million shortfall by Aug. 31.

The theater is planning a new fund-raising campaign but acknowledges that donations are likely to be lower than usual because of the Shakespeare in the Park cancellation; the loss of an in-person gala (there will be a free gala online); and the economic downturn, as well as the increased competition for philanthropy that comes with it.

So the Public is imposing an austerity plan. It will furlough 70 percent of its full-time, permanent staff — about 160 people — from May 4 to Aug. 31, the end of its fiscal year. Most of the remaining staff, everyone who makes over $60,000 per year, will take up to a 25 percent pay cut. Eustis will take a 40 percent pay cut.

The Public said that its employees had been paid since the theater closed March 12, and that they will receive health insurance through Dec. 31. It will provide grants to the furloughed employees to supplement expected unemployment benefits. All artists who were involved with canceled productions were paid based on the end of the scheduled runs of their shows.

But it’s not all bad news: The Public is continuing to make art.

Its most ambitious plan is a new play by Richard Nelson, produced using video conferencing and featuring the fictional Apple family of Rhinebeck, N.Y. — the characters who appeared in four acclaimed plays he wrote and directed from 2010 to 2013.

This fifth play, set during the pandemic, imagines the family members quarantined in different locations. The original cast members, themselves sheltering in place, will portray the Apples having a Zoom call that the audience will be able to watch for free on April 29.

“It’s the best thing about how we live now in quarantine that I’ve read in any medium,” Eustis said of Nelson’s script.

This week the Public has also been hosting, by video conferencing, a staged reading for an ambitious new musical written by Taub about the women’s suffrage movement.

And the theater has several other digital initiatives: a collaboration with regional theaters to commission mini-plays that anyone can read aloud at home; a weekly online Shakespeare challenge; streams of Joe’s Pub performances; and an opportunity to watch the Pulitzer-winning playwright Suzan-Lori Parks at work.

Eustis, who was hospitalized for four days in March with what he believes was the coronavirus, said it is too soon to say when the Public will reopen, or what its programming will look like when it does.

“One of the really painful things for me is that, through no choice of my own, I’ve had to break a lot of commitments,” he said. “I don’t plan to set myself up for more commitments I’ll have to break, so we are not going to commit to anything or announce anything until we know we can do it.”