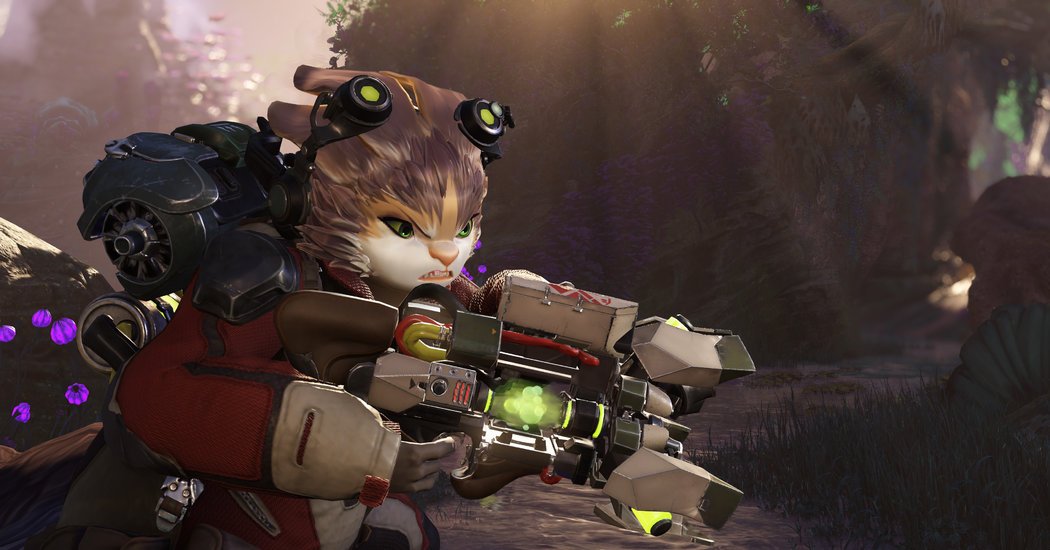 Opening a new front in the campaign to dominate digital entertainment, Amazon is investing hundreds of millions of dollars into becoming a leading creator and distributor of video games.

The internet giant said it intended to release its first original big-budget game, an ambitious science-fiction shooter called Crucible, in May after several coronavirus-related delays. It is also developing a full-fledged cloud gaming platform under the code name Project Tempo. And it is working on new casual games that broadcasters on its popular Twitch streaming service can play alongside viewers in real time.

The push is Amazon’s most significant investment in original entertainment since it became a major producer of streaming series and films over the last decade. Amazon is also aiming at strategic rivals like Google and Microsoft, which have expanded their video game offerings.

In a demonstration of Amazon’s commitment to video games and the imprimatur of its founder, Jeff Bezos, the company has bestowed the name Relentless Studios on its flagship game operation in Seattle. Mr. Bezos originally considered naming his company Relentless.com and personally registered the domain, which still points to Amazon.

“The big picture is about trying to take the best of Amazon and bringing it to games,” said Mike Frazzini, Amazon’s vice president for game services and studios, who is largely directing the games strategy. “We have been working for a while, but it takes a long time to make games, and we’re bringing a lot of Amazon practices to making games.”

The potential prize: attracting millions more people to Amazon’s ecosystem of services. Over the last decade, video games have blossomed into one of the world’s most popular — and lucrative — forms of entertainment.

Gaming is expected to generate more than $160 billion in revenue in 2020, making the business more than twice the size of the global recorded music industry (around $19 billion) and worldwide film box office (around $43 billion) combined. Now, with much of the world staying home in the pandemic, video games are becoming even more popular.

Next month, Amazon plans to ship not only Crucible but also New World, a “massively multiplayer online” game in which thousands of players occupy a persistent fantasy realm based on an alternate 17th century. Crucible was developed by Relentless in Seattle, but New World was created by a separate Amazon game studio in Irvine, Calif., built after the company acquired Double Helix Games in 2014.

The Irvine studio is also developing a massively multiplayer game based on the “Lord of the Rings” franchise. John Smedley, a former president of Sony Online Entertainment, joined Amazon in 2017 to start a third internal Amazon game studio in San Diego, but his new project has not been revealed.

With these in-depth online games, Amazon is going after hard-core players, who are typically the most demanding in the world.

If Crucible and New World succeed, Amazon will not only build a consumer games business but also show the potential of its technology tools. The company has developed a game processing engine called Lumberyard and hopes to harness the power of its cloud computing services to deliver innovative online experiences, such as huge multiplayer battles in New World.

Mr. Frazzini, Amazon’s game chief, transferred from the company’s book division to its retail game segment in 2009. He quickly spotted an opportunity for Amazon to start marketing cloud computing services to game developers and begin the journey toward making top-end games of its own. He said persuading Amazon to lean into video games hadn’t been difficult.

“It was very clear to everyone that people, customers, love video games,” he said. “It was so obviously important to customers that we need to be doing something.”

Crucible, a team-based combat game, borrows elements from “battle arena” games like League of Legends and Dota 2 to give the typical shooter formula more strategic depth. Louis Castle, a longtime games executive hired by Amazon to run Relentless, said Crucible had been redesigned many times since its inception in 2014, coming to focus on competitive online play and live-streaming on Twitch.

“It’s the active involvement of hundreds and hundreds of people over very long periods of time that gets to a great product,” Mr. Castle said, crediting Amazon’s deep pockets for underwriting patience with the Crucible team. “Thankfully, we’re with a company that has the resources to let this new team fully gel and get a great expression out there.”

Crucible was scheduled to be revealed early last month and released on March 31. After coronavirus travel restrictions interfered with marketing plans, the start date was pushed to April 14. On March 23, Mr. Frazzini, Mr. Castle and other executives convened a videoconference from their homes on Amazon’s internal Chime conferencing system and decided to delay Crucible again, to May.

“We just don’t know where the world is going to be in a couple of weeks,” Mr. Castle said. The executives decided to delay the game, he said, “rather than put a ton of pressure and onus upon a team that’s worked very hard for many years of their lives when they might be going through some pretty difficult times with themselves or loved ones.”

After releasing Crucible and New World in May, Amazon plans to introduce interactive games on Twitch over the summer. Millions of viewers merely watch other people play video games on Twitch now, but Amazon aims to break that virtual wall.

“We love this idea that you have a player, a streamer and a viewer all sharing in this synchronous interactive environment of Twitch,” Mr. Frazzini said.

Even more far-reaching is Amazon’s shrouded cloud-gaming effort, Project Tempo. Usually, the calculations required to power a video game are performed on a console, computer or mobile device owned by the player. But with a cloud service, that processing happens in a corporate data farm. That can allow users to play games on cheaper devices without downloads.

Game executives and analysts have suspected that Amazon was working on its own cloud gaming service; people close to Project Tempo said that the company had hoped to introduce an early version this year but that it could slip into 2021 amid coronavirus disruptions.