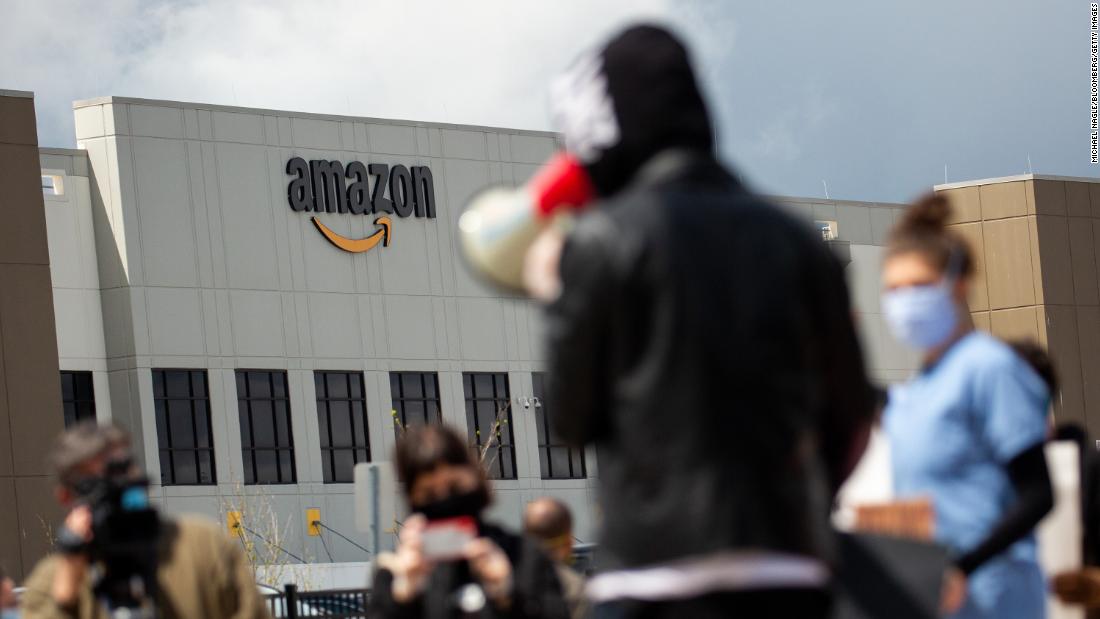 “I quit in dismay at Amazon firing whistleblowers who were making noise about warehouse employees frightened of Covid-19,” Bray wrote in a lengthy blog post published on his website. Bray said he had worked at Amazon (AMZN) for more than five years; his last day at the company was Friday.
In recent weeks, Amazon has fired several warehouse workers, including Christian Smalls and Bashir Mohamed, who had been vocal about the company’s response to coronavirus, as well as two corporate employees, Emily Cunningham and Maren Costa, who had organized around climate action and, more recently, around warehouse worker conditions during the pandemic. For its part, Amazon has maintained that it supports “every employee’s right to criticize their employer’s working conditions, but that does not come with blanket immunity.”
In the case of Cunningham and Costa, Amazon said in a statement at the time that it “terminated these employees for repeatedly violating internal policies.” Amazon previously said both Smalls and Mohamed received warnings over “violating social distancing guidelines.” Smalls was ultimately fired in late March after attending a worker protest at the facility despite being under a 14-day quarantine, the company has said. Mohamed was fired in April as “a result of progressive disciplinary action for inappropriate language, behavior, and violating social distancing guidelines,” the company has said.

Amazon declined to comment on Bray’s departure for this story.

Bray’s blog post speaks to the growing tension brewing inside Amazon’s ranks during this unprecedented public health crisis. The pandemic has led to increased demand for a number of Amazon’s services and also increased scrutiny. There has been renewed worker activism at a number of Amazon facilities and, with it, support from activist corporate employees who have challenged the company’s actions prior to the pandemic.

Bray, in a list of adjectives describing the firing of activists in his blog post, alleged that the terminations are “designed to create a climate of fear.”

“Firing whistleblowers isn’t just a side-effect of macroeconomic forces, nor is it intrinsic to the function of free markets. It’s evidence of a vein of toxicity running through the company culture. I choose neither to serve nor drink that poison,” wrote Bray, adding that he first escalated his frustrations “through the proper channels and by the book” because “VPs shouldn’t go publicly rogue.”

“I’m not at liberty to disclose those discussions, but I made many of the arguments appearing in this essay,” said Bray, who worked for Amazon’s cloud computing division, Amazon Web Services. “That done, remaining an Amazon VP would have meant, in effect, signing off on actions I despised. So I resigned.”

Bray was one of thousands of employees who signed onto an open letter in April 2019 pushing for a shareholders’ resolution and climate action.

Cunningham, a founding member of Amazon Employees for Climate Justice who was fired from her role as a user experience designer last month, told CNN Business that Bray “was our only VP who signed” the open letter.

“It is incredibly heartening to see someone so high up in the company act with such integrity,” said Cunningham. “I think the purpose and intent behind firing Maren and I was to scare people. People are scared — we’re in the middle of a pandemic — but also, people are angry, as Tim was, by what happened.”