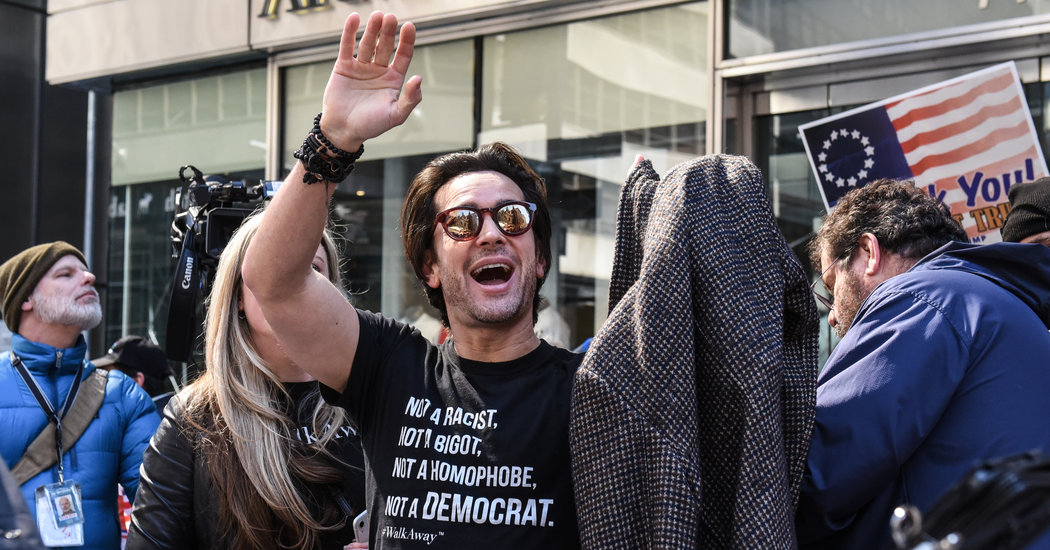 A conservative activist who is an ardent supporter of President Trump was barred by American Airlines on Thursday, one day after he was removed from a flight from La Guardia Airport to Dallas-Fort Worth Airport after he refused to wear a mask.

The passenger, Brandon Straka, recorded his exchange with an airline employee on Wednesday after boarding the plane and shared it with several media outlets.

In the video, the employee referred to an American Airlines policy that requires all passengers and crew members to wear masks to prevent the spread of the coronavirus. The policy, which went into effect on May 11, makes exemptions for children, passengers with disabilities and medical conditions, and for people eating or drinking. It is similar to the policies of other major airlines.

The airline employee told Mr. Straka that if he did not comply that he would have to get off the flight, which carried 122 passengers. A political journalist from The New York Times, Astead Herndon, was sitting in the next seat and also recorded the dispute.

Mr. Straka, 43, a gay conservative who rose to prominence in 2018 when he announced that he was leaving the Democratic Party and became the founder of the #WalkAway movement, responded that he didn’t like wearing a mask. He was escorted off the plane and rebooked on another American Airlines flight to Charlotte, N.C., and then on to Seattle.

But American Airlines said in a statement on Thursday that after reviewing the episode that Mr. Straka would no longer be allowed on any of its flights for as long as the mask requirement is in place. According to the airline, Mr. Straka gave contradictory answers about having a medical condition.

“As a result of this review, Mr. Straka will not be permitted to fly American, as he failed to comply with our stated policy and crew member instructions,” the airline said. “We are committed to protecting the safety and well-being of our customers and team members, which is why we strengthened enforcement of our policy for required face coverings on board. We expect customers who choose to fly with us to comply with these policies, and if necessary, we will deny future travel for customers who refuse to do so.”

Mr. Straka said in an interview on Thursday night that he had a medical condition and that was the reason he didn’t wear a mask. He would not elaborate on the condition and said that the airline employee should have inquired about it before telling him to get off the plane. He disputed that he gave conflicting answers about having a medical condition.

“My feeling was that the airline succumbed to mob mentality, which, I feel, is happening all over the place in our country right now,” Mr. Straka said.

Mr. Straka said he flew frequently and had never been forced to wear a mask. He said he had received death threats since the episode.

Mr. Herndon wrote on Twitter that there was a “mutiny” on the flight to Dallas with Mr. Straka, and that other passengers applauded when Mr. Straka exited the plane. Both he and Mr. Straka have a common destination on Saturday: Mr. Trump’s campaign rally in Tulsa, Okla.