Americans are rapidly shrinking their credit card debt during the pandemic 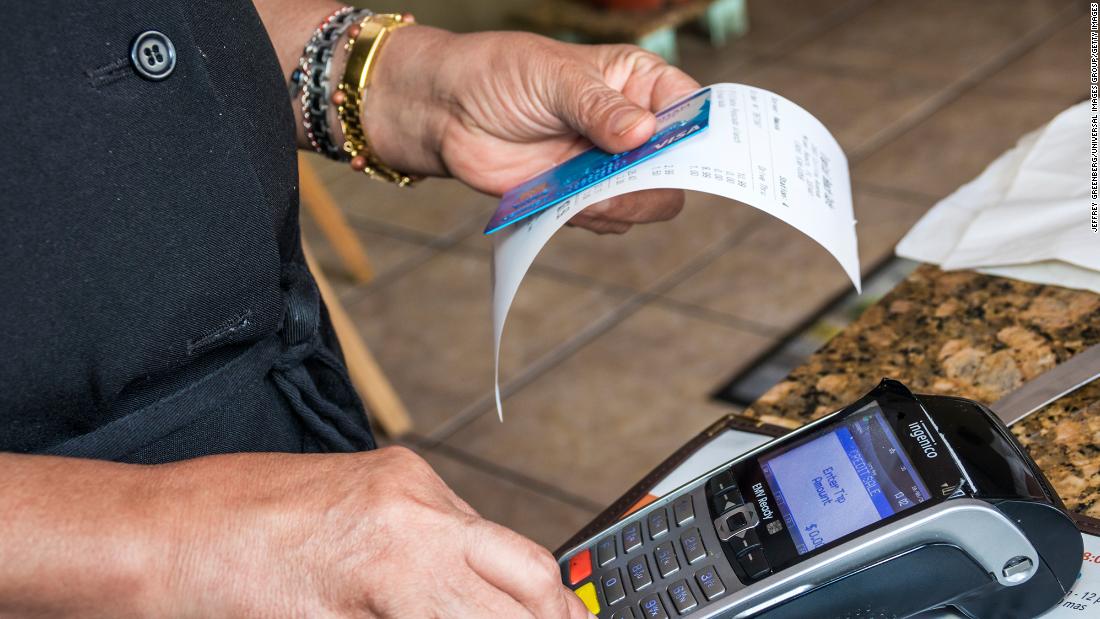 The amount of consumer revolving credit, which is mostly credit cards, plunged by another $24 billion in May, the Federal Reserve said Wednesday. This costly form of debt is down more than $100 billion since hitting a record high in February and is now below $1 trillion for the first time in nearly three years.

In many ways, it makes perfect sense that Americans are swiping the plastic less. The health crisis, forced the widespread shutdown of restaurants, bars and professional sports. That was especially true during the March-May period captured by the Fed data.

“Consumers had no choice but to spend less on their credit cards,” Danielle DiMartino Booth, CEO and chief strategist at Quill Intelligence, wrote in a note to clients Thursday.

Not surprisingly, spending at restaurants imploded during the spring when health restrictions made eating out impossible in many parts of the nation.

The seven-day average of spending (including on credit cards) at big chain restaurants was down by as much as 40% in April from the year before, according to Bank of America. That metric has since recovered in June to normal levels, Bank of America said.

At the same time, Americans are wisely paying down outstanding credit card balances and avoiding racking up new debt during this economically tumultuous period.

In just the past few weeks, major companies including Brooks Brothers, Neiman Marcus and Chesapeake Energy (CHK) have all filed for bankruptcy. United Airlines (UAL) announced plans this week to furlough up to 36,000 employees, while Levi Strauss (LEVI) and Harley Davidson (HOG) detailed hundreds of job cuts.

Given that backdrop, it’s little surprise that Americans are pulling back on debt. The March-May period marked the first time in a decade that overall consumer credit declined for three months in a row, according to Oxford Economics.

However, some types of debt are showing signs of life. Specifically, the amount of nonrevolving credit, which is mostly student debt and auto loans, actually rose by $6 billion in May.

Signals consumers are hunkering down

Credit card debt typically carries punishing interest rates — even for borrowers with the strongest credit scores. The fact that this type of pricey debt is shrinking is encouraging given the economic uncertainty.

However, this trend, along with the surging saving rate, also reflects a broader hunkering down among Americans that is problematic for an economy that is two-thirds driven by consumer spending.

“That’s bad news for the economy,” Brusuelas said. “You want a confident consumer to expense her income. We’re just not seeing that right now.”

More so than during the onset of the past two recessions, Congress and the White House have taken bold steps to provide emergency relief to households and businesses via the CARES Act.

Specifically, stimulus checks of up to $1,200 per household were sent out in the spring. And the federal government is providing $600 of extra weekly unemployment benefits for people who lost their jobs during the pandemic.

Taken together, those emergency moves have lessened the reliance on swiping the plastic.

“The need for credit cards as a smoothing mechanism has been greatly diminished,” according to Booth, the Quill Intelligence CEO. “The credit cycle that would have begun to emerge has been frozen by the CARES Act.”

But the problem is the $600 of enhanced unemployment benefits expires at the end of July. And there is a heated debate among economists and politicians about whether extending them at the current level — or at all — will discourage Americans to look for new jobs.

What is clear, however, is that letting this benefit lapse will force some unemployed Americans, particularly those in lower-income households, to rely on expensive credit card debt to make ends meet.

That means the recent plunge in credit card debt may prove to be short-lived — but potentially for the wrong reasons.