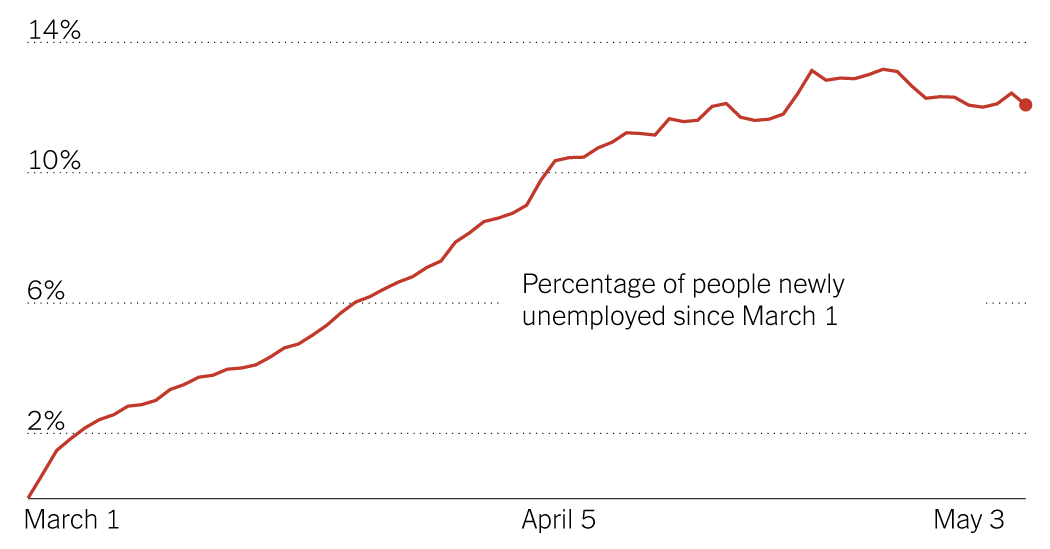 Last week the government showed that the country had shed jobs at an astonishing rate: In the span of just one month, more than 20 million people found themselves out of work.

But it appears that the pace of job loss is slowing, according to an analysis of daily surveys conducted by Civis Analytics. Women, workers earning more than $100,000 and part-time workers are continuing to experience growing joblessness or no improvement, but the rate of change is relatively brighter for men, full-time employees and people earning less than $50,000.

March and April were devastating, but May seems to be flattening

The surveys from Civis Analytics, a Democratic data firm, include demographic information and employment status, offering a sense of the pace of the daily economic downturn.

Other researchers tracking employment have also noted a slowdown in employment losses. Although our tracker is not intended to replace or precisely replicate official government surveys, it’s roughly consistent with the monthly jobs report data. For example, the Current Population Survey implies employment among working-age Americans fell 13.8 percent between early March and early April, while our tracker shows employment among this population fell 13.2 percent by mid-to-late April.

Because these results are cumulative, a slowdown means that fewer people are joining the ranks of the unemployed but also that few of the workers who became unemployed in March and April are returning to work.

The results are useful because our more traditional barometers of the labor market are lagging, given the rapid pace of the country’s economic decline. And although weekly unemployment claims are a useful snapshot, states do not report them with the sort of consistent demographic detail that allows researchers to dig beneath the headline numbers. Claims may also be distorted by state offices’ ability to handle the surge in volume; confusion among workers over who is eligible; and the likelihood that many confused workers apply multiple times.

The government’s household survey for April asked Americans about their work activities during the week of April 5. Our tracker suggests that the May report, which is being conducted this week and will ask about last week’s activity, will show further deterioration in employment versus April. But it also suggests that almost all of this extra damage occurred before late April.

The flattening of joblessness is uneven across demographic groups. While low-income workers have been hit harder than middle- or high-income ones, their unemployment levels appear to have flattened out. High-income workers, by contrast, seem to still be losing jobs.

Like the employment report released by the Bureau of Labor Statistics, our analysis shows that women have been hit more severely than men. But what the report doesn’t tell us is that the job market may be recovering slightly for men while remaining stagnant for women.

Job loss among male workers may have peaked

Although there are differences in results by race and ethnicity, the differences are far narrower in the Civis data than along other dimensions like education, age and gender. This is broadly consistent with the April household survey.

Since our tracker is based on survey data, it’s subject to noise and error. Readers should not overinterpret daily chart changes. But the data should capture the broad contours of where the job market is headed while we wait for official word from government sources.

The Upshot Job Tracker uses data provided by Civis Analytics, which runs surveys almost every day using a number of online panels. Civis periodically re-interviews people and can compare the changes in responses over time in key variables, in this case employment. The survey asks people about their current employment status (working full time, working part time, or not working) as well as a series of demographic questions. The questions are not designed to reproduce those asked on official government surveys like the Current Population Survey, so there may be some discrepancy in how survey takers interpret full-time employment, part-time employment and annual household income.

We take each person’s daily response, using only the last daily response in cases of multiple entries per day, and create a series of rolling 14-day panels. Each respondent is limited to appearing once (the latest response) in each rolling panel. The resulting sample size for the rolling panels ranges from approximately 6,600 to 20,000.

We weight each rolling 14-day panel so as to reflect key characteristics of the U.S. working age (18-64) population in the February 2020 basic monthly C.P.S., including age, sex, education and race/ethnicity proportions. We further interact each of these dimensions with pre-pandemic employment status.