Amid the Coronavirus Crisis, Heart and Stroke Patients Go Missing 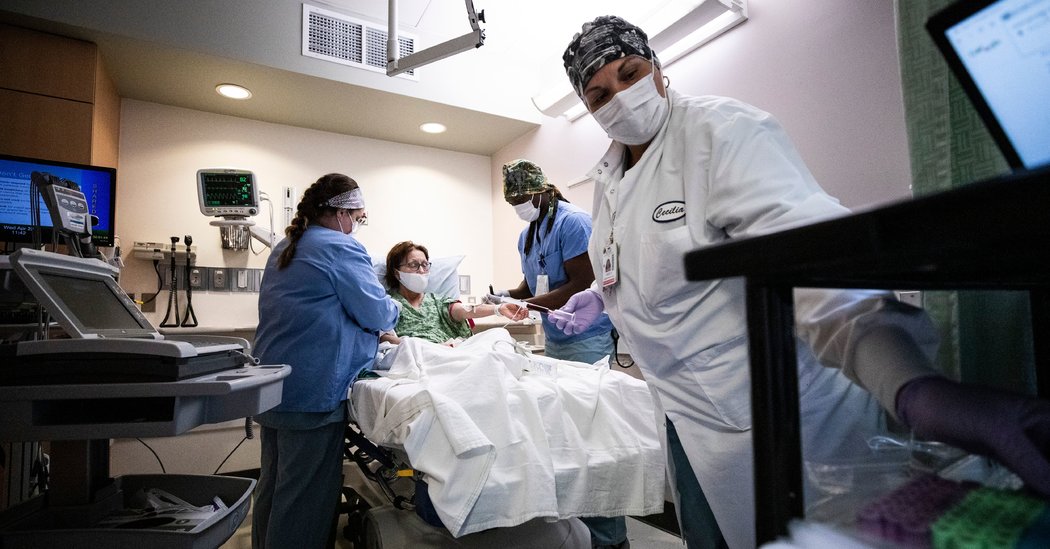 Bishnu Virachan was a bicycle deliveryman for a grocery store in Queens. With New York City locked down, he was busier than ever.

But in early April, as he was watching television, he felt “a pain in my heart.” It frightened him, but he did not go to the emergency room. Mr. Virachan, 43, was even more afraid of that.

After a few days, pain overrode fear and he went to Mount Sinai Hospital in Manhattan. Doctors discovered a nearly complete blockage of his left main coronary artery.

A surgeon opened the artery, but Mr. Virachan was left with a weakened heart. Had he waited much longer, doctors said, he would have died.

Fear of the coronavirus is leading people with life-threatening emergencies, like a heart attack or stroke, to stay home when ordinarily they would have rushed to the emergency room, preliminary research suggests. Without prompt treatment, some patients, like Mr. Virachan, have suffered permanent damage or have died.

Emergency rooms have about half the normal number of patients, and heart and stroke units are nearly empty, according to doctors at many urban medical centers. Some medical experts fear more people are dying from untreated emergencies than from the coronavirus.

A recent paper by cardiologists at nine large medical centers estimated a 38 percent reduction since March 1 in the number patients with serious heart attacks coming in to have urgently needed procedures to open their arteries.

On a recent day at the Cleveland Clinic, there were only seven patients in the 24-bed coronary care unit. Usually the unit is full.

“Where are the patients?” asked Dr. Steven Nissen, a cardiologist there. “That can’t be normal.”

One of the few was a man who lives in Cleveland. According to Dr. Nissen, the man felt chest pain while doing push-ups, but feared going to the hospital because there might be coronavirus patients there. He stayed home for a week, growing weaker — out of breath with the slightest exertion, his legs swelling. Finally, on April 16, he went to the Cleveland Clinic.

What should have been an easily treated heart attack had progressed to a life-threatening disaster. He survived after a dicey operation and spent nearly a week in intensive care, including several days on a ventilator, Dr. Nissen said.

The inpatient stroke unit at Stanford University Medical Center in California usually has 12 to 15 patients, said its director, Dr. Gregory Albers. On one recent day in April, there were none at all, something that had never happened.

“It’s frightening,” Dr. Albers said. Yet few Covid-19 patients have been admitted to the hospital, and people needing emergency treatment have little to fear.

“We prepared for an onslaught, but it has not arrived,” Dr. Albers said.

According to Dr. Samin Sharma, who heads the cardiac catheterization lab at Mount Sinai Hospital in New York, the number of heart attack patients fell from seven in February to three in March. So far in April there have been only two.

It’s not just the United States. Dr. Valentin Fuster, editor of the Journal of American College of Cardiology, said he is getting so many papers from around the world on the steep decline in heart attack patients in hospitals that he simply cannot publish them all.

A hospital in Jaipur, India, for example, that Dr. Sharma owns, treated 45 heart attack patients in January, he said. In February, there were 32, and in March, 12. In April, so far the number is just six.

“I am very very worried that we are creating a problem that will have long-term consequences for the health of the community,” said Dr. Richard A. Chazal, medical director of the Heart and Vascular Institute at Lee Health in Fort Myers, Fla., and a past president of the American College of Cardiology.

Could it be that there actually are fewer medical emergencies now? Dr. Fuster speculated that perhaps people are healthier because they are eating better, exercising more and under less stress now that so many are working from home. And, of course, the air is cleaner in urban areas.

Other experts doubt that better health habits could have such dramatic and immediate effects. Far from eating better, Dr. Nissen said, many patients tell him they are overeating comfort food. There is no evidence that people are exercising more, and people are hardly under less stress.

“They are scared to death,” Dr. Nissen said.

And, he said, even if some people changed their habits, studies have failed to find any immediate effects of short-term lifestyle changes on heart attack rates.

At the moment, it is nearly impossible to know who is not showing up in emergency rooms, and why, said Dr. Harlan Krumholz, a cardiologist at Yale University. “You can’t find the dog that doesn’t bark,” he said.

But you can get a sense from the patients who do show up, even belatedly.

Kaplana Jain, 60, of Cresskill, N.J, was watching CNN late at night on April 18. She got up to go to the bathroom and collapsed on the floor. Her blood sugar was elevated, and her family called 911.

When the paramedics arrived, Ms. Jain told them she did not want to go to the hospital. “I was scared because of the coronavirus going on,” she said.

The next day, unable to walk, she called Dr. Sharma, a family friend. He urged her to go to the hospital, but still fearful, she insisted on going to his office the next day.

When she arrived, Dr. Sharma did an EKG that confirmed she was having a heart attack. He rushed her to the hospital and opened a blocked artery.

“She is one of the lucky people with this kind of heart attack who didn’t develop cardiac arrest or go into shock,” he said. Had she not gone to the hospital, she likely would have died at home.

Back at the Cleveland Clinic, a man arrived with stroke symptoms on April 15. According to Dr. Thomas Waters, an emergency room physician, the man had waited two days to come in because he was afraid of the coronavirus. There was nothing doctors could do to prevent permanent brain damage.

“What’s done is done,” Dr. Waters said. “Now we are at a point where we have nothing to offer but rehab.”