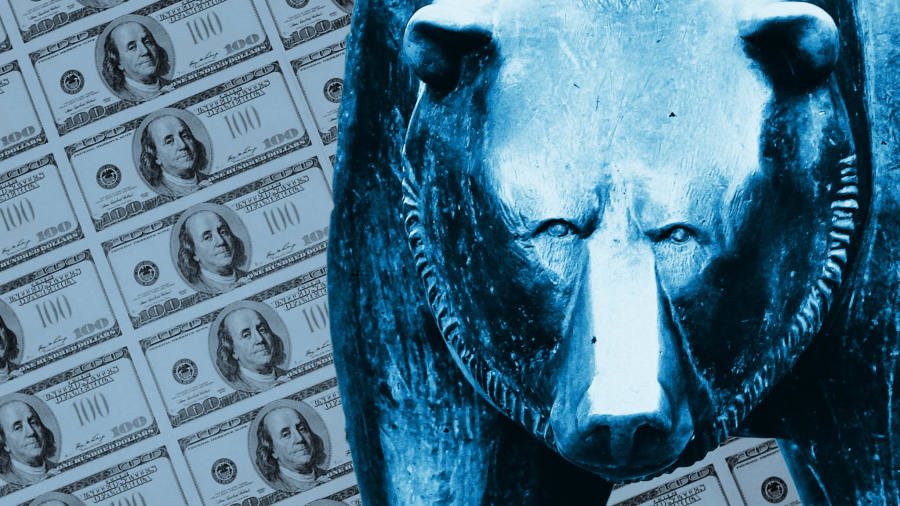 When financial markets were rattled across the board last week, some investors and analysts thought they knew where to point the finger. “The risk parity kraken has finally been unleashed,” one tweeted.

Risk parity is a strategy pioneered by Bridgewater’s Ray Dalio. His pioneering fund, All Weather, has been hit hard in the recent turmoil, sliding 12 per cent this year. That is quite a fall, for a strategy designed to function well in almost any market environment, by seeking to find a perfect balance of different asset classes such as stocks and bonds.

Some analysts say such funds are not just succumbing to the wider turmoil but exacerbating it — especially the freakish sight of both supposedly defensive government bonds and risky equities selling off at the same time. “These moves suggest a rapid unwind of leveraged strategies like risk parity,” said Alberto Gallo, a fund manager at Algebris Investments.

Charlie McElligott, a Nomura strategist, estimates risk parity funds have dumped more than half their holdings in just a few weeks, making the strategy “by far the largest culprit in the cross-asset deleveraging purge” seen in recent days. Does it deserve such opprobrium?

The strategy can trace its origins to an unlikely source: the Chicken McNugget.

When Mr Dalio was an economic consultant in the early 1980s, one of his clients was McDonald’s, which asked him to solve a conundrum. The fast-food company wanted to start selling chicken nuggets, but could not agree to a fixed price with poultry producers. There was no chicken futures market, and neither McDonald’s nor its potential supplier wanted to shoulder the risk of fluctuating prices.

So Mr Dalio broke it down into its components — the cost of corn and soyabean to feed the chicks — and created a “synthetic” future that gave the poultry producer the hedge it needed. And thus, the McNugget was born.

Breaking down assets into their components and reassembling them is the bedrock of what is now Bridgewater Associates, the world’s biggest hedge fund. It also underpinned the creation of All Weather in 1996. It was envisaged as a passive investment portfolio of diversified assets for Mr Dalio’s own trust, designed to perform irrespective of the market climate.

The classical balanced investment portfolio is made up of 60 per cent equities and 40 per cent bonds. But Mr Dalio thought this was a bit crude. If one invests $6 in the S&P 500 and $4 in bonds, the greater volatility of equities will swamp the steadiness of fixed income. Investing $3 in stocks and $7 in bonds makes the portfolio less volatile, but is also likely to dampen returns.

So All Weather used leverage to juice up the bond allocation, so that all parts of the portfolio have roughly the same volatility. Add more uncorrelated asset classes, such as inflation-protected bonds and commodities, and one should have a better-balanced vehicle that should in theory do well in most environments. Risk parity funds periodically rebalance to keep the volatility of each bucket roughly constant, and typically target an overall volatility level of 10-12 per cent.

“There is no limit to how the All Weather principles of balance can be applied and over time could perhaps contribute to a more stable financial system,” Bridgewater wrote in a 2012 report on the strategy.

Copycats have followed. Estimates for the size of the risk-parity segment vary wildly. Some institutional investors have created similar internal strategies, for which there are no firm numbers. But there is probably $175bn to $400bn invested in risk parity, analysts estimate, and at full leverage their heft can be several times that.

The problems arise when markets move violently and in unison. Because risk parity funds target specific levels of volatility, they then have to automatically reduce their holdings. That can become particularly acute in their leveraged fixed-income bets, and some analysts say this is why even safer corners of the bond market have taken a walloping recently.

However, some industry insiders say risk parity is more victim than culprit. It is “ridiculous” to think the strategy has any meaningful impact on markets, argued Michael Mendelson, a manager of AQR’s risk parity funds. He conceded the industry has slashed its exposure, but only over the course of three weeks, and argued the effects are negligible compared to broader money flows.

“Risk parity is down because almost everything is down,” he said. “Over the year bonds have done well, but just not well enough to compensate for everything else being lousy.”

The pain has certainly been intense. S&P’s 10 per cent volatility target risk parity index has fallen almost 12 per cent already this month, nearly as bad as the performance of global equities. But few strategies are shining in the current chaos, when many investors are scrambling to sell everything at hand.

However, the golden era of risk parity — when both bonds and equities rallied — may be over, Morgan Stanley analysts warned. They reckoned that with bond prices so high, even if normal correlations reassert themselves, they are unlikely to provide the portfolio ballast they once did.

That is a bigger challenge for risk parity than a bout of losses, argued Paul Britton, the head of hedge fund Capstone. “Risk parity was a brilliant idea 20 years ago, but there’s no more juice to squeeze out,” he said. “It’s in a dangerous position now.”