Another Way to See the Recession: Power Usage Is Way Down 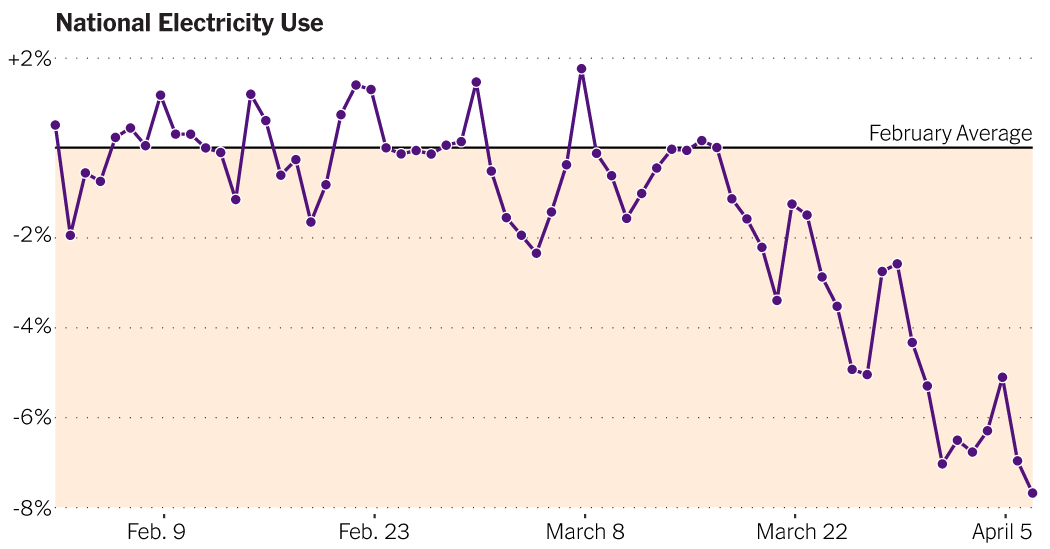 New data on electricity use suggest that U.S. economic activity probably declined more over the past three weeks than it did during the entire year and a half of the Great Recession. It may already be the deepest downturn since the Great Depression; it is certainly the fastest.

These numbers are important because our official statistics can’t keep pace with the abrupt economic changes the coronavirus shutdown has caused. All those closed stores, silenced factories and darkened office buildings are yet to be counted in the government’s official economic numbers, which take months to collect, process and report.

But evidence of the sharp economic shift shows up in a large and rapid decline in electricity usage over recent weeks.

The numbers come from a new electricity-based measure that Steve Cicala, an economics professor at the University of Chicago, has devised to track the state of the economy and how it changes from day to day. The idea of tracking electricity usage, he says, follows from the observation that most economic activity requires electricity.

Mr. Cicala’s results conform with a similar analysis from the U.S. Energy Information Administration and from reports by regional electricity providers. “In terms of this scale of event, I don’t think we’ve had in recent history anything like this hit the grid,” said April Lee, an analyst at the E.I.A.

Mr. Cicala said his indicator was useful in times of rapid economic change, adding, “While this isn’t a perfect measure, it certainly helps with filling in the gap so that we can get the most complete picture.”

In New York City, electricity demand fell 14 percent from its recent average, as restaurants, theaters and offices closed their doors.

A similar decline is evident in eastern Wisconsin and Michigan (the areas share the same energy market). As of Tuesday, electricity demand was down 12 percent.

The notion of tracking the economy through electricity usage when more reliable indicators are unavailable is not new. For instance, many analysts look at electricity usage in China as a way of checking numbers that provincial officials compile under pressure to meet government quotas.

Although the United States has an array of reliable official economic statistics, none are well suited to tracking a downturn like the current one, when the unemployment rate may change as much in two days as it typically does over an entire year.

It is likely that these electricity data — which can be produced with a lag of about a day and are available for different regions of the country — will also provide the first clear signal of when the current free fall will end.

For instance, if the government’s small-business loan program prompts employers to keep workers on payrolls, jobless claims might fall, even as the labor market continues to deteriorate. Alternatively, the rising generosity of benefits might lead other employers to lay off idled workers, which could lead initial unemployment claims to rise for reasons unrelated to underlying labor market trends.

Electricity usage and the last recession

One way to assess the accuracy of this new economic indicator is to replay the signals it would have sent during the previous recession. Lehman Brothers filed for bankruptcy in September 2008, heralding a sharp turn for the worse in an economy already contracting, but the gross domestic product numbers released a few months later initially suggested only a moderate decline in output. It took several more months for the government to release revised numbers revealing the true extent of economic carnage.

By contrast, electricity usage confirmed almost immediately that the economy had cratered. Moreover, electricity use fell the most in those parts of the country that subsequent data would confirm had experienced the sharpest fall in employment.

Even though electricity use tracked the last recession closely, this is no guarantee that it will do so again. Today’s social isolation economy is very different from the pre-pandemic economy. The loss of output resulting from shuttered factories will clearly be visible in reduced electricity usage, but other changes — such as differences in the energy intensity of working from home rather than in an office — might yield more ambiguous signals.

How bad could this get?

Mr. Cicala’s data also shows that electricity usage has fallen sharply across the European Union in recent weeks. The impact of the coronavirus was initially bigger in Europe, and the initial economic effect was, too. If the United States continues to track Europe’s path with a slight lag, it will see a further decline in economic activity in coming weeks.

But even worse outcomes are possible. The electricity usage in Italy — the epicenter of the coronavirus outbreak in Europe — has fallen more than three times as much as in the United States, suggesting a particularly steep economic decline.

Electricity use in selected areas

The accompanying figures show electricity usage in a few markets around the nation. The geographic regions covered may look unfamiliar; they reflect the service areas for electricity in different parts of the country.

As you read these charts, be aware that the technical adjustments required to separate the effects of seasonal and weather patterns on electricity use from those changes driven by economic activity are inexact, particularly with daily data. As a result, some daily shifts (most noticeably on the weekends) may still reflect idiosyncratic factors like social distancing. In addition, shifts in electricity use in some regions may be more or less drastic depending on the industrial structure of the local economy.

The electricity data we are reporting on come from hour-by-hour measurements of total electricity use across electric power zones. In most of the United States (and within much of the European Union), utilities buy electricity from generators at auctions that are held every few minutes, and the price and quantities bought in these markets are made public almost immediately.

Electricity use is higher during the workday than in the evening; higher on weekdays than on weekends and major holidays; higher in summer and winter than in fall and spring; and higher when cold weather leads to more heating, or when warm weather leads to greater use of air-conditioning. Mr. Cicala’s numbers adjust for these factors, effectively stripping out their effects, to better reveal underlying movements in electricity use that are more likely to reflect changing economic conditions.

The result is an indicator that can track day-to-day or week-to-week changes in economic activity, as electricity use rises and falls with the intensity of domestic, commercial and industrial usage.

As useful as these numbers are, over longer periods of time — say months or years — it’s better to rely on more standard economic measures, which are less likely to be distorted by changes in industry size, or changes in energy efficiency.