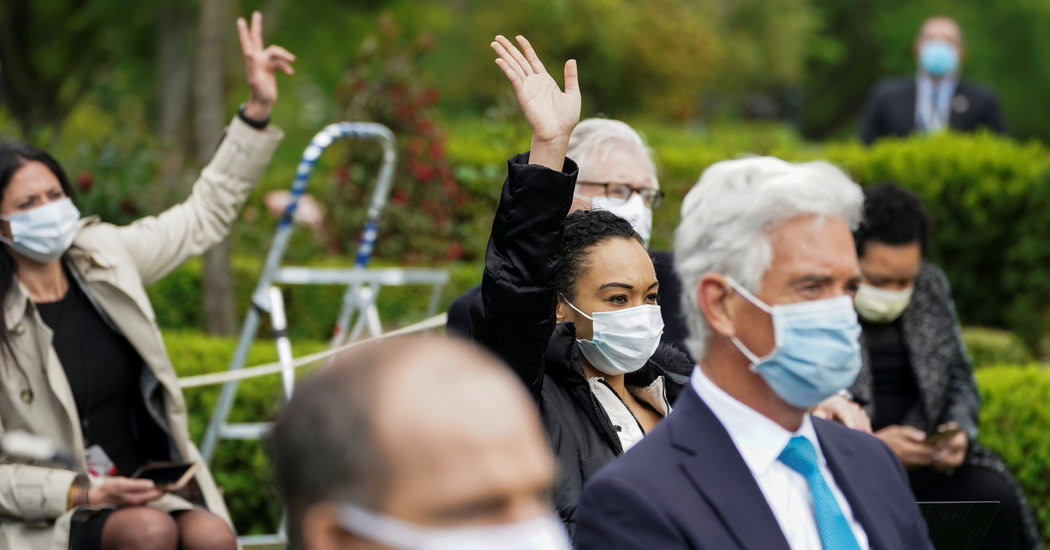 For some reporters, the up-close wrath of anti-lockdown protesters has become a hazard of the job.

On the steps of the statehouse in Columbus, Ohio, shortly before a news conference held by Gov. Mike DeWine, Adrienne Robbins, a reporter at the local NBC affiliate, found herself on the receiving end of a tirade that was captured on video.

The confrontation occurred on May 1, when Ms. Robbins was checking in with the protesters who had gathered to show their opposition to the restrictions that have been in place since March to guard against the spread of the coronavirus.

One protester moved close to the reporter, whose face was partly covered by a surgical mask in keeping with the governor’s request that reporters wear protective gear at news conferences. Ms. Robbins asked the protester to give her some space, to no avail. Raising her voice, the protester complained about the news media in general and the station Ms. Robbins worked for. She accused the reporter of “terrifying the general public.”

“You know that the company that you work for is lying to the American people,” the protester said, jabbing a finger in the reporter’s direction, “and you know that what you are doing is wrong.”

As Ms. Robbins stood there, her eyeglasses started fogging up above the mask.

“You see how nervous you are?” the protester said. “You’re shaking. You are sweating.”

Eventually, the reporter’s glasses slipped from her face and broke on the ground. Ms. Robbins picked them up and walked away. The protester followed, continuing to berate her. (The protester could not be reached for comment.)

“The big thing she said was we’re spreading fear and want to scare people,” Ms. Robbins said in an interview. “That’s offensive to me. I’m from Fredericktown, Ohio, about an hour north of here. My mom watches these news conferences; my grandparents watch them. I would never want to scare them. But I want them to know what’s going on.”

Journalists in at least three other states have been involved in altercations at anti-lockdown protests in recent weeks. In Germany, reporters covering similar protests have been victims of at least four assaults, according to the International Press Institute.

Anna Liz Nichols, an intern at Michigan Advance, a nonprofit news site, covered a protest two weeks ago that included armed opponents of the state’s lockdown. Inside the statehouse in Lansing, Mich., she was hit on the left side of her face by a man’s rifle — accidentally, Ms. Nichols believes.

“The nature of the rally was described as peaceful by the police,” she said in an interview. “But there was no room in the Capitol. There were hardly any masks, and people were being careless with their firearms to the point where it didn’t matter if they were loaded or not, they could hurt people with them.”

In a polarized time, public safety measures like social-distancing and mask-wearing have become grist for the culture wars. Coupled with President Trump’s frequent criticisms of individual news outlets and certain reporters, the recent confrontations between protesters and journalists seem almost inevitable.

“This is an extension of the general antagonistic feeling that we’ve seen in the last couple of years,” said María Salazar Ferro, the emergencies director of the Committee to Protect Journalists.

She added, “In general, we have seen increased hostility that’s generally fueled by public discourse coming from the president, local officials and other types of personalities.”

President Trump’s attacks on the news media for playing up the crisis or not giving the federal government enough credit for its response have fueled the anger, she added.

The Committee to Protect Journalists issued guidelines to reporters who cover anti-lockdown protests. “Remain alert to the risk of people spitting / coughing close to or on you, either accidentally or deliberately,” it says.

Last month, in Huntington Beach, Calif., a camera operator for a Fox affiliate who had been filming an anti-lockdown rally said a man brandished a knife and forced him to delete video, a police department spokeswoman confirmed. The camera operator declined to be interviewed. A Fox spokeswoman said it was not clear if the man with the knife was a protester. The suspect has been charged with kidnapping, the police department spokeswoman said.

Last week in Phoenix, BrieAnna J. Frank, a reporter for The Arizona Republic, was outside a mask-making facility as it prepared for a visit from President Trump, she recounted in an interview.

After Ms. Frank tried to interview protesters, a few who had declined to be interviewed started criticizing her for wearing a mask, she said. She told them she was wearing it partly because her mother is a nurse who has worked with Covid-19 patients, and she wanted to protect the people around her.

“You’re on the wrong side of history,” one protester said to Ms. Frank and the other reporters covering the event.

“You’re on the wrong side of patriotism,” another protester said. “You guys are anti-patriots. You’re like communists.”

Another protester used vulgar language to insult the journalists.

Ms. Frank said, “I think that some of the folks there interpreted wearing a mask or being a journalist as representative of a larger issue.”

“I don’t necessarily think it was about us,” she added. “It wasn’t a personal attack. It was that, based off what they said, masks, to them, are doing more harm than good and are spreading fear and paranoia.”