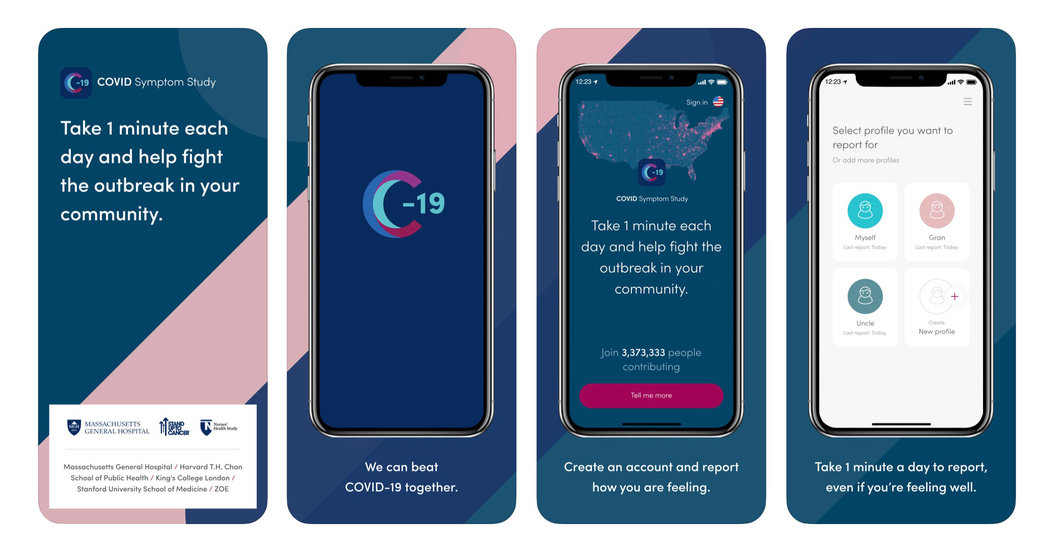 In the absence of widespread on-demand testing, public health officials across the world have been struggling to track the spread of the coronavirus pandemic in real time. A team of scientists in the United States and the United Kingdom says a crowdsourcing smartphone app may be the answer to that quandary.

In a study published Monday in the journal Nature Medicine, researchers found that an app that allows people to check off symptoms they are experiencing was remarkably effective in predicting coronavirus infections among the 2.5 million people who were using it between March 24 and April 21.

The study, which tracked people in the United States, the United Kingdom and Sweden, found that the loss of taste and smell was the No. 1 predictor of whether a person was going to get sick with Covid-19, the illness caused by the coronavirus, followed by extreme fatigue and acute muscle pain.

Using a mathematical model, the researchers were able to predict with nearly 80 percent accuracy whether a person was likely to have Covid-19 based on their age, sex and a combination of four symptoms: loss of taste or smell, persistent cough, fatigue and loss of appetite.

Two-thirds of those who later tested positive for the virus — about 15,000 people — had self-reported the loss of taste and smell, the study found. Fever and cough — symptoms that have been considered the most reliable indicators of infection — ranked fourth and fifth on the list.

“It’s just such a weird symptom that doesn’t occur with most other diseases so it’s rarely wrong,” said Dr. Tim Spector, a professor of genetic epidemiology at King’s College London and a lead author of the study.

Because loss of smell and taste is often associated with mild cases of Covid-19, Dr. Spector said health officials could act on information provided by a surveillance app to encourage participants to isolate themselves until they were able to get tested.

“The more we collect this stuff and the more we document it properly, the better we can deal with new outbreaks,” he said.

The researchers said they hoped the findings might persuade the World Health Organization and other health agencies to modify guidelines that currently rank fever and cough well above loss of taste and smell as symptoms for determining who to screen for Covid-19.

Dr. Andrew T. Chan, a professor at Harvard Medical School and the lead investigator on the study, said a surveillance app could help health authorities identify people at the early stage of the disease who are unknowingly spreading the virus to others.

“At the moment, we’re mostly gathering data on the tip of the iceberg from those who are really sick and show up at the hospital. But there is a huge iceberg below of people with mild symptoms who we know are major culprits for community spread,” said Dr. Chan, who is also chief of clinical and translational epidemiology at Massachusetts General Hospital. “We have no ability to track these people at home and that’s a real problem.”

If more widely adopted, the study results could provide public health authorities an inexpensive tool for detecting outbreaks in cities, states and even individual neighborhoods. Given that the loss of taste and smell appears to be an early indicator of Covid-19, the information, the researchers said, would allow health officials to prepare for a spike of infections and help guide the allocation of scarce resources like ventilators for the most seriously ill, and the personal protective gear needed by medical workers.

As local outbreaks subside, the app can also guide decisions about the easing of lockdowns and social distancing measures.

The researchers said the app did not prompt significant privacy concerns because participants are not required to provide their names and any other personal information, only their ZIP codes.

John Brownstein, an epidemiologist and chief innovation officer at Boston Children’s Hospital, said the study added to the growing body of evidence that highlights the value of smartphone apps as real-time disease surveillance tools. Dr. Brownstein, who was not involved in the coronavirus app study, has a decade of experience using crowdsource symptom apps, starting with an influenza app called Flu Near Me, and more recently, Covid Near You, an app that has already drawn more than 600,000 users in the United States.

Surveillance apps, he said, can detect an outbreak well before people begin showing up at hospitals. “Because we have such a lack of testing, this kind of data is going to give us insights into symptomatology, hot spots and the impact of social distancing,” he said. “Without this information, how are communities supposed to know we’re on the other side of this pandemic and whether we can reopen?”

But crowdsourcing apps do not provide a complete snapshot of the coronavirus pandemic. Because users tend to be younger, they are less than ideal for charting its progression among the elderly.

And they are also not a replacement for testing, which is the most effective means for tracking the spread of the disease. The data can also be muddled by people who report symptoms shared by other illnesses.

“It’s a sort of real-time experiment done on a massive scale that couldn’t have been done a couple of years ago,” Dr. Spector said.

The app he helped develop piggybacks on technology that King’s College London has been using to track health outcomes among 14,000 twins in the United Kingdom. When the coronavirus outbreak temporarily idled the project, Dr. Spector realized their app could be easily repurposed to track the pandemic.

“It was a crazy idea, but four days later we launched the app and it went viral,” he said. Within three days, more than a million people had downloaded the app, a number that has since grown to 3.3 million.

Dr. Cristina Menni, a research fellow at King’s College and another lead author of the study, said the researchers continued to refine the app. Among their goals is finding a way to gauge whether pre-existing conditions or genetic factors might magnify the health risks for people infected with the virus.

But for now, she said, crowdsourcing apps may be a useful public health tool to help contain the pandemic.

“Because there hasn’t been widespread testing, monitoring for symptoms of the coronavirus is a very cheap and simple way of doing it,” she said. “At the very least, anyone who reports a loss of taste and smell should self-isolate until they can get tested.”