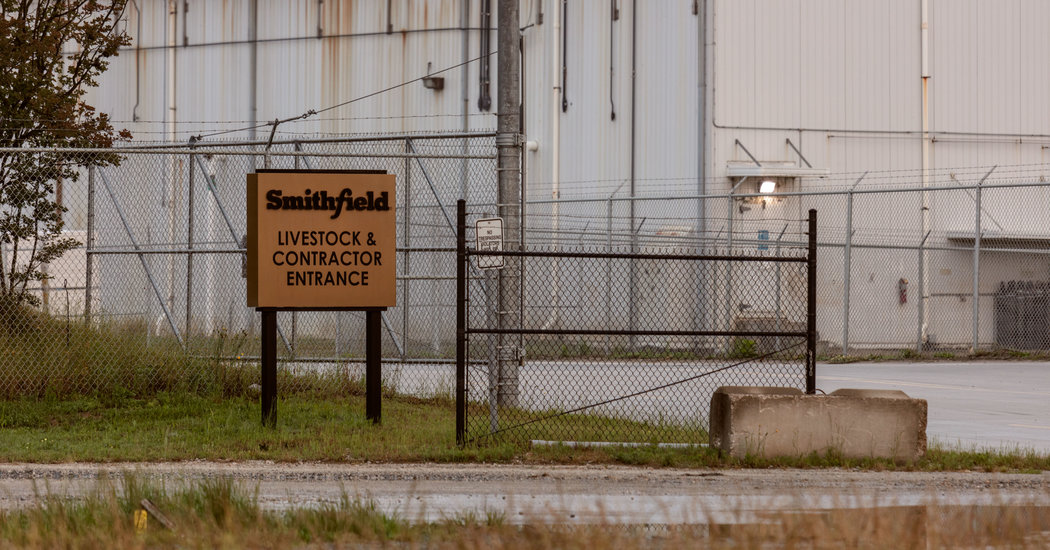 The Smithfield Foods plant in Tar Heel, N.C., is one of the world’s largest pork processing facilities, employing about 4,500 people and slaughtering roughly 30,000 pigs a day at its peak.

And like more than 100 other meat plants across the United States, the facility has seen a substantial number of coronavirus cases. But the exact number of workers in Tar Heel who have tested positive is anyone’s guess.

Smithfield would not provide any data when asked about the number of illnesses at the plant. Neither would state or local health officials.

“There has been a stigma associated with the virus,” said Teresa Duncan, the director of the health department in Bladen County, where the plant is located. “So we’re trying to protect privacy.”

Along with nursing homes and prisons, meatpacking facilities have proven to be places where the virus spreads rapidly. But as dozens of plants that closed because of outbreaks begin reopening, meat companies’ reluctance to disclose detailed case counts makes it difficult to tell whether the contagion is contained or new cases are emerging even with new safety measures in place. The Centers for Disease Control and Prevention said there were nearly 5,000 meatpacking workers infected with the virus as of the end of last month. But the nonprofit group Food & Environment Reporting Network estimated last week that the number has climbed to more than 17,000. There have been 66 meatpacking deaths, the group said.

And the outbreaks may be even more extensive.

For weeks, local officials received conflicting signals from state leaders and meatpacking companies about how much information to release, according to internal emails from government health agencies obtained through public records requests by Columbia University’s Brown Institute for Media Innovation and provided to The New York Times. The mixed messages left many workers and their communities in the dark about the extent of the spread in parts of Iowa, Nebraska and Colorado.

The emails also reveal the deference some county officials have shown toward the giant meatpacking companies and how little power they have in pushing the companies to stem outbreaks.

“Bad news spreads way faster than the truth,” said a county health official in Colorado of an outbreak at a Cargill plant, according to notes from a conference call last month. “At this point, we are not doing anything to cast them in a bad light. Will not throw them to the Press.”

Questions about the transparency of governments and companies about the coronavirus extend far beyond meatpacking. Chinese officials have been widely criticized for not fully disclosing the extent of the virus’s spread within their borders. And in the United States, President Trump has questioned the official death toll from the coronavirus, suggesting that the numbers may be inflated even as public health experts and statisticians say the opposite is more likely true.

The meat companies are not legally required to disclose how many workers are sick. But legal experts say privacy is not a valid reason for keeping the numbers from the public.

“Alerting a community about the number of cases in a particular place is a standard public health response,” said Nicole Huberfeld, a public health expert at Boston University. “People need to act appropriately if they are exposed.”

The lack of full disclosure also demonstrates the industry’s sway as a major employer in the Midwest and the South.

While more than 80 percent of beef and pork workers are unionized, even labor leaders acknowledge it is not as easy to shut down meat plants as other factories because they are essential to the food supply. Auto plants, for example, were shut down relatively early during the pandemic and have only just begun to reopen.

After some slaughterhouses did close, restaurants and stores experienced significant shortages of meat, leading Mr. Trump to issue an executive order designating meat plants “critical infrastructure” that must stay open.

But the order did not address crucial issues like testing, leading many companies to reopen plants or keep them operating without fully assessing whether employees had contracted the virus.

Across the country, many local health departments have encouraged companies to test employees — but stopped short of ordering them to do so.

On April 21, health officials in Dallas County, Iowa, told Tyson Foods that they could provide rapid testing kits for workers at its local plant in Perry, according to the emails. An early draft of that message to Tyson managers underscored the urgency, saying, “At this time, we strongly recommend this option be implemented immediately.”

But the county’s lawyer asked that the language be revised to read, “At this time, we ask you to consider this be implemented as soon as possible.”

In an interview, the county attorney, Chuck Sinnard, said he recommended revising the language because he did not believe the health department had the authority to order Tyson to conduct tests.

“It was in the vein of choosing wording cautiously and conservatively so we didn’t get in a position where we were overstepping our bounds,” he said.

On May 5, the state health department, which ultimately worked with Tyson to test employees, said 730 workers, or 58 percent of the plant’s work force, had tested positive for the virus.

In North Carolina, workers and community advocates in the Tar Heel area started to raise the alarm in April, as local news outlets reported a string of infections linked to the Smithfield plant.

In neighboring Robeson County, 59 residents who work at the Tar Heel facility have become infected, out of a total of 669 cases in the community, according to Melissa Packer, the county’s assistant health director.

But like the rest of the public, Ms. Packer does not know the full extent of the outbreak at the plant.

In conversations with state officials this month, Ms. Packer said, a number of county health directors requested that plant-specific numbers stay private. One of the reasons, she said, was that the local officials wanted to avoid antagonizing the meatpackers while they worked alongside them to curtail the outbreaks.

“A lot of the concerns were around fractured relationships,” Ms. Packer said. “Some local health directors from the counties where there are processing plants expressed some concerns about how that may negatively impact the relationship they have built with the management of the companies.”

A spokeswoman for North Carolina’s health department, Amy Ellis, declined to reveal plant-specific data. She said the state has recorded a total of 1,952 cases across meat plants in 17 counties.

Smithfield said it continued to “report all Covid-19 cases to state and local health officials, as well as the C.D.C.” and was working to provide free testing to all its employees.

This month, Gov. Pete Ricketts of Nebraska announced that the state would not disclose the number of coronavirus cases in specific meat plants without the consent of the companies. The state is releasing aggregate case numbers across the meat processing industry, the governor’s spokesman said. Some of Nebraska’s big meatpackers have also started revealing less about case numbers to their employees.

Eric Reeder, a local union president representing workers in 14 plants around Nebraska, said that the larger the outbreak, the less transparent some of the companies have become about the case numbers.

“When a plant hits several hundred cases, they get more tight-lipped, and that makes it difficult for workers to protect themselves and their families,’’ said Mr. Reeder, president of the United Food & Commercial Workers union local 293.

Those transparency issues were on display last month when Teresa Anderson, the director of the Central District Health Department in Grand Island, Neb., told the meat processor JBS that she planned to conduct coronavirus testing at a park near the company’s plant, which employs 3,700 people.

JBS wanted assurances that the test results would not be made public.

“We understand that you will be asking and recording the employer,” Nicholas White, a compliance official at JBS, wrote in an email to Ms. Anderson on April 15. “But we would ask that you not disclose that information as part of any public disclosure of the testing results.”

Six days later, though, Ms. Anderson announced that more than 200 people connected to the Grand Island plant were infected. By May 5, at least 328 employees had tested positive, according to the emails from Grand Island, some of which were previously reported by ProPublica.

A spokesman for JBS, Cameron Bruett, said the company did not want to publicize the number of positive cases at the plant because little testing was being conducted in the broader area. Releasing the data, he said, “would distort any one company’s role in community spread.”

The tussle over whether plants should test workers has stretched for months in some states, creating critical delays in isolating infected workers. Local health authorities concede that asymptomatic employees are still coming to work with the virus, fueling the spread.

As recently as May 14, health officials in Wyandotte County, Kan., warned that the virus was continuing to spread inside a National Beef plant.

“The outbreak has gone on for a month,” a county epidemiologist said in an email to her colleagues.

“Should we bust in, show our badges and test everyone?” a colleague suggested. “Ha!”

A National Beef spokesman said the company was following the county’s health guidelines.

Even when case numbers are disclosed, many health departments say they have little authority to act at meat plants.

Last month, a worker in a Triumph Foods pork plant in St. Joseph, Mo., emailed the city saying at least two employees were infected and 90 percent of the staff was still working “less than a meter away” from one another.

“Workers are scared,” the employee said. “Can the government take action on the matter for the protection of workers and the city?”

A health official wrote back on April 21, saying the city had “limited authority” in closing a business and suggested that the workers cover their noses and mouths and use hand sanitizer.

Since then, Triumph has supplied workers with masks, among other protective measures, according to the company website. But at the time, the plant worker was not comforted by the city’s assurances.

“Are you telling me that it doesn’t matter that two workers are infected,” he wrote. “Because the plant is worth more than the workers’ health?”