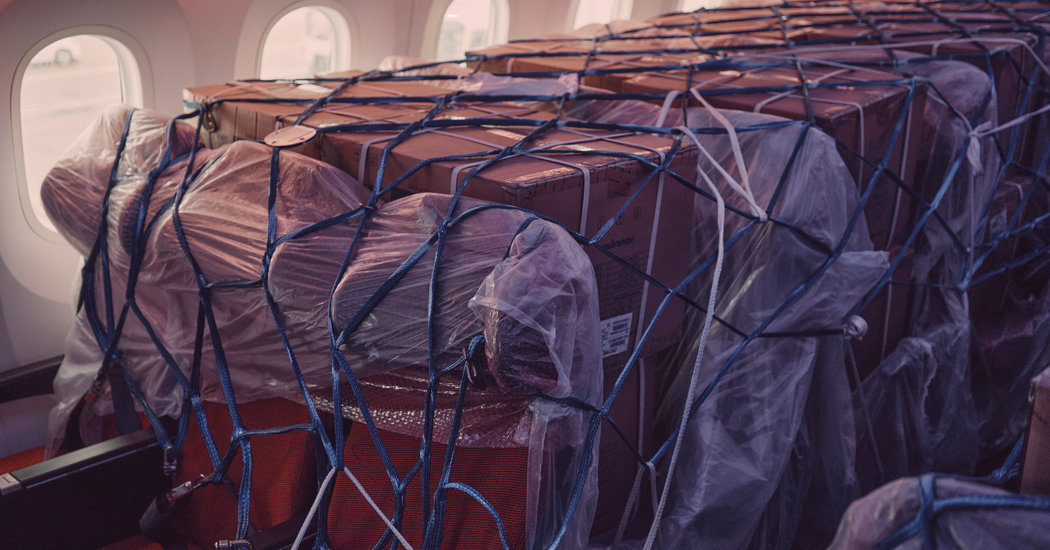 Most passenger planes today fly virtually empty, but when Virgin Atlantic flight VS251 landed at Heathrow Airport near London on a cloudy afternoon late last month, most of its 258 seats were occupied.

No one was violating social distancing recommendations, though. The seats, along with the plane’s belly, were loaded with medical supplies. That flight was one of nine that Virgin flew last month that used passenger planes — without any passengers — to transport ventilators, masks, gloves and other medical necessities between Shanghai and London.

It was one of the most vivid examples of how thoroughly the pandemic has muddled the economics of the industry. Airlines have long carried freight alongside passengers, but it never made sense to use their planes exclusively for cargo. That changed in March. As companies eliminated thousands of flights, cargo space became scarce and the price of sending goods by plane shot up, creating an economic case for repurposing idled passenger planes.

“The cargo business is keeping aircraft, which would otherwise be parked, in the air and given us all more hope than otherwise that we will come out of this,” said Dominic Kennedy, the head of cargo operations for Virgin.

Before late March, Virgin had never used a passenger plane to make a cargo-only trip. Now, it is operating 90 flights a week, even as it makes deep cuts to its business. (Last month, Virgin’s founder, Richard Branson, even promised to mortgage his personal Caribbean island to help preserve jobs.)

Virgin is not alone in charting an uncertain path forward.

In the United States, each of the three largest airlines started running cargo-only flights in March. American Airlines had not flown an all-cargo trip in more than three decades. Now, it is flying 140 a week.

Even Germany’s Lufthansa, which has long operated a separate cargo-only business, has taken advantage of the opportunity by converting its Airbus A330 passenger planes so they can be used to transport goods. Last month, the airline made several trips using those retrofitted planes to carry medical goods from China to Frankfurt, including one from Shanghai.

The goods that people and businesses ship by air change seasonally, but they are typically expensive, perishable, urgently needed or some combination of the above. They include items like smartphones, automotive parts, seafood, pharmaceuticals, mail, packages and even fast fashion blouses, shirts and other apparel. But a new category of goods has emerged in force in recent months: medical supplies.

Masks, gloves, ventilators and the like “caused peak demand and these absolutely high volumes, but that’s not saying that the other products or commodities went away,” said Harald Gloy, the chief operation officer of Lufthansa Cargo, the freight arm of the passenger airline.

Under normal circumstances, about half of all airfreight is transported in cargo planes operated by companies like UPS, FedEx and DHL. The other half is typically carried in the bowels of planes below where passengers sit. But these are not normal times.

That gap between supply and demand — along with a boost from discounted jet fuel prices — caught the attention of airline executives.

“It is the bright spot for the industry because it is the only part that is operating and earning revenue at any scale,” Alexandre de Juniac, the head of the International Air Transport Association, told reporters late last month.

Worldwide, the average price to ship a kilogram of cargo by air was $3.63 last month, a 65 percent rise from March, according to WorldACD, a data provider that compiles freight data from 70 member airlines. That figure was both the highest recorded and the largest monthly increase since at least January 2008, when WorldACD began collecting consistent, reliable worldwide data.

The price of freight from Asia soared, driven by demand for medical supplies produced in factories there, which have slowly come back online as the region emerges from lockdowns, according to WorldACD. But with the global economy battered, demand for goods could fall fast, and freight rates with them.

Until then, passenger airlines will keep offering cargo flights, and the IATA is urging governments globally to do more to help. In particular, the group called on government officials worldwide to expedite approval for all-cargo flights, to exempt flight crews from quarantine restrictions and to help airlines find facilities to process cargo and places for crews to rest.

In the United States, airlines have been slow to use plane cabins to transport cargo, as Lufthansa has done in some cases, because they were awaiting approval from the Federal Aviation Administration. The agency last month outlined the steps carriers should take to use that space safely.

At Lufthansa, each all-freight flight has three flight attendants on board, compared with the 15 typically needed to serve passengers. They are there to make sure the goods do not shift in flight or catch fire, Lufthansa’s Mr. Gloy said.

“In the lower deck, there’s a fire detection system in the compartment, which is not the same in a passenger cabin because usually there are passengers who do the observations,” he said.

Still, converting passenger planes to carry cargo on the fly is not easy, a lesson that Lufthansa learned the hard way. Decades ago, the carrier experimented with using a Boeing 737 to transport passengers by day and cargo by night, removing and replacing the seats each day, according to Mr. Gloy. Eventually, Lufthansa decided that the rigmarole of using planes for both purposes was not worth the effort.

“This was not sustainable from an economic standpoint, obviously, but also technically and operationally,” he said.

These days, however, using passenger planes to ferry cargo makes sense and has offered a modicum of hope to airlines. Of course, the economic rationale for such flights might prove fleeting.

“The capacity crunch will, unfortunately, be a temporary problem,” said Mr. de Juniac, the air travel association chief. “The recession will likely hit air cargo at least as severely as it does the rest of the economy.”