As the U.S. Lashes Out at China, Beijing Hardens Its Resolve 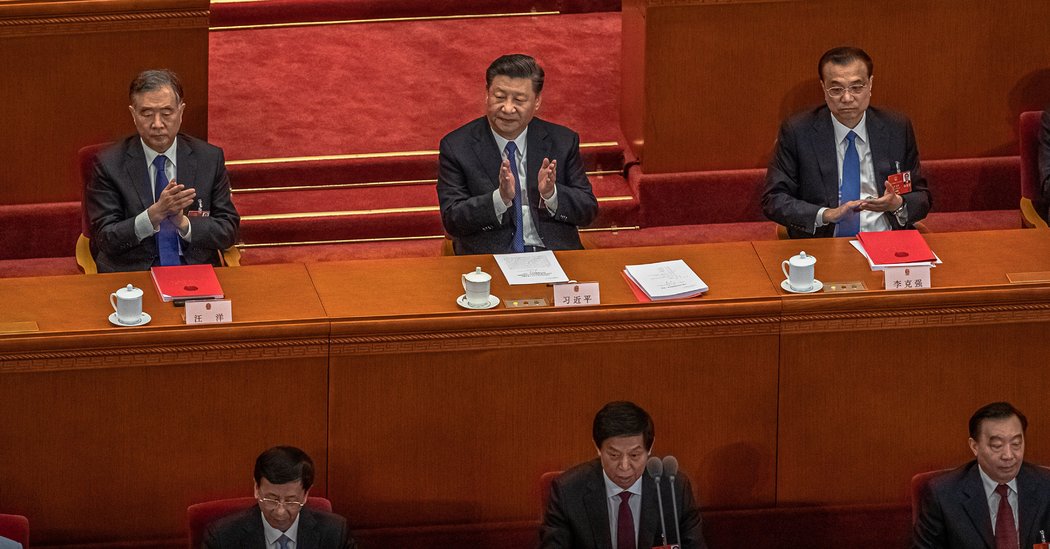 BEIJING — Step by step, the United States under President Trump has sought to intensify pressure on Beijing in hopes of making China change its ways. Each move has instead hardened the resolve of China’s leadership to resist, plunging relations to their current nadir.

On Wednesday, the United States won an initial victory in a Canadian court in its long effort to bring criminal charges against a senior executive of Huawei, the Chinese telecommunications giant. On Thursday, China vowed to retaliate against both countries, having already blocked some Canadian exports and held two Canadian citizens for more than 500 days.

Trump administration officials argue that they have brought China to the table on trade by imposing tariffs. But they have failed so far to achieve their goal of fundamentally shifting China’s behavior — on trade or any other issue.

From Beijing’s perspective, the punitive measures have simply revealed the core of American hostility toward China.

“When China was rising as an economic power, the United States tolerated it,” Shen Dingli, an expert on relations with the United States at Fudan University in Shanghai, said in a telephone interview. “Now that China is strong, it cannot tolerate it anymore.”

China does not want to incinerate the relationship with the United States, given the economic benefits. Nor is it willing to back down, creating a constant push and pull in Beijing between the hawks and the more moderating forces.

China’s premier, Li Keqiang, struck a conciliatory tone on Thursday at the close of the legislative session, the National People’s Congress. He called for close trade relations without offering any concessions. He said the two countries “could and should cooperate in many ways in facing both conventional and unconventional challenges,” while pointedly refraining from accusing the United States of any interference in Hong Kong affairs.

Yet, even as Mr. Li was speaking, the Hong Kong office of China’s foreign ministry issued a strong denunciation of the United States. “It is utterly imperious, unreasonable and shameless for American politicians to obstruct the national security legislation for Hong Kong with threats of sanctions based on United States domestic law,” the ministry declared.

With both countries blaming each other, the result has been a downward spiral of tit-for-tat actions that may not let up before Mr. Trump’s re-election campaign ends in November.

When the Trump administration announced new restrictions to block companies around the world from using American-made machinery and software to help Huawei, Beijing promised to target American tech companies operating in China. When the administration capped the number of Chinese journalists in the United States, China kicked out most of the American correspondents from three major news organizations in the United States, including The New York Times.

Both leaders, Mr. Trump and Xi Jinping, feel compelled to appear strong. The American president views blaming China for the coronavirus crisis in the United States as a path to re-election. The Chinese leader faces enormous economic and diplomatic challenges that could stir domestic opposition to his grip on power.

“Anything the U.S. says or does or will do, China will refuse,” Shi Yinhong, a professor of international relations at Renmin University in Beijing, said in a telephone interview.

What the American moves have not done is chasten Mr. Xi’s government, which appears to feel simultaneously embattled and defiant.

Hu Xijin, the outspoken editor of The Global Times, a nationalistic tabloid controlled by the Communist Party, all but dared the Trump administration to carry out its threat to end Hong Kong’s favored trade status. He noted that there were 85,000 Americans there and scores of companies that would reap “the bitter fruits” of the American decision.

“Washington is too narcissistic,” he wrote in Chinese on Weibo on Thursday. “American politicians like Pompeo arrogantly think that the fate of Hong Kong is in their hands.”

The National People’s Congress, the top legislative body, on Thursday dutifully adopted the government’s proposals to impose new laws on Hong Kong to suppress subversion, secession, terrorism and other acts that might threaten China’s national security — as the authorities in Beijing define it. The vote was nearly unanimous, with only one delegate voting against and six abstaining.

China’s authoritarian system and a pliant state news media apparatus give Mr. Xi a far greater advantage in controlling the message in the face of American hostility — exploiting it to rally popular outrage and tempering it to play the role of magnanimous global partner.

At his ritual news conference wrapping up the National People’s Congress on Thursday, Mr. Li, the premier, singled out for praise an American company, Honeywell, that on Tuesday announced an investment in Wuhan — the city from which the pandemic spread. A month before, the Pentagon had awarded Honeywell a contract to supply protective masks.

Mr. Li twice called for “peaceful” relations with Taiwan, after conspicuously dropping the word when he discussed Taiwan at the start of the weeklong legislative session. And he underlined China’s willingness to look further for the origins of the new coronavirus.

China, though, has shown little inclination for compromise.

Beijing’s reacted harshly to a Canadian court’s ruling clearing an initial hurdle for the extradition of Meng Wanzhou, a senior executive of Huawei charged by the United States with bank fraud related to American sanctions against Iran.

The Chinese Embassy in Ottawa accused the United States and Canada of abusing their bilateral extradition treaty and “arbitrarily taking forceful measures” against Ms. Meng.

“The purpose of the United States is to bring down Huawei and other Chinese high-tech companies, and Canada has been acting in the process as an accomplice of the United States,” the embassy said on Twitter, which is banned inside China. “The whole case is entirely a grave political incident.”

China has already retaliated against Canadian exports of pork, canola oil and other products, and in recent days it has hinted that it will target still more. It has also held two Canadians, Michael Kovrig and Michael Spavor, in secret detention on state security charges widely viewed as retaliatory.

Neither has appeared in a public court hearing or been afforded the access to lawyers during court proceedings. That has hardened anti-Chinese sentiment in Canada, which had not historically been as suspicious as, say, the United States.

The International Crisis Group, where Mr. Kovrig, a former diplomat, worked, posted a message on Twitter noting that Thursday was his 535th day in detention. “Each passing day is a stain on China’s reputation,” the group said.

He has described the pandemic and its still-unfolding economic challenge as a crucible that will forge a stronger government and a stronger party. China has also showed it will not be distracted from its defense of territorial claims along its land and sea borders — from the South China Sea to the Himalayas. The commander of the People’s Liberation Army’s garrison in Hong Kong delivered a pointed reminder of its duty to keep the peace there on the sidelines of the congress in Beijing this week.

The bravado has weakened what leverage the United States might once have wielded: the threat of international condemnation, restrictions on trade, even the prospect of decoupling the world’s two largest economies. Beijing now seems willing to bear any cost.

Lau Siu-kai, a former senior Hong Kong government official who advises Beijing, said that American pressure had failed to prompt a reconsideration in the Hong Kong issue, in part because China’s leadership has anticipated American opposition on many fronts.

“Beijing will stick with its new policy toward Hong Kong regardless of U.S. reactions and is prepared to take countermeasures in a tit-for-tat manner,” he said.