As Virus Ravages Budgets, States Cut and Borrow for Balance 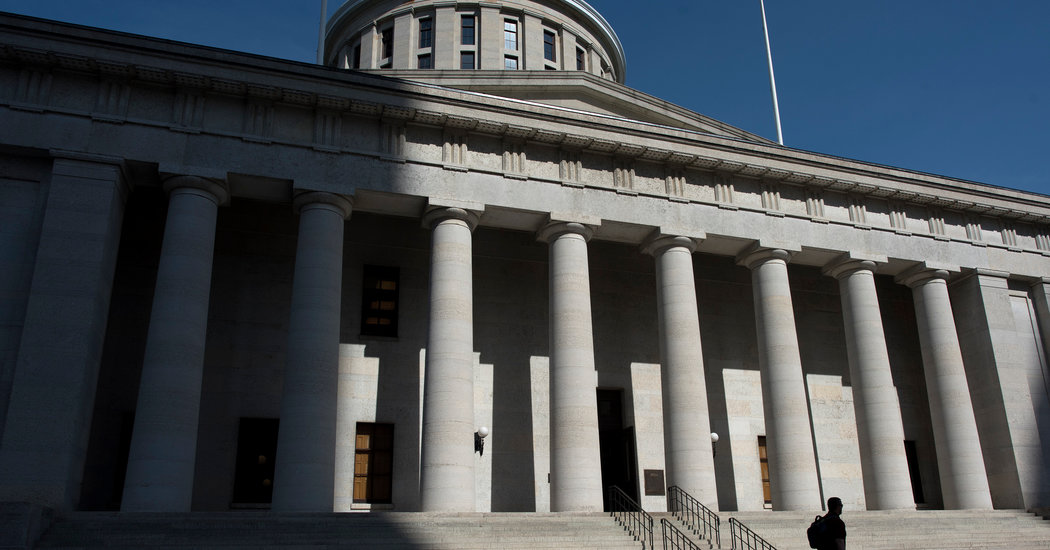 In February, Ohio was running a $200 million budget surplus. Then the coronavirus pandemic struck, wiping out the surplus — and then some. Tax revenue plummeted and public health expenses skyrocketed.

By the end of April, there was a $777 million hole, a nearly $1 billion swing in two months.

Gov. Mike DeWine ordered immediate budget cuts to close the gap, and he had little choice. The pandemic, he said, “does not exempt us from balancing our budget, which we are legally obligated to do.”

Ohio is hardly alone. Every state is grappling with a version of the same problem, and all but one — Vermont — have balanced-budget laws in place. And for most, the new fiscal year starts on July 1, leaving them just a few weeks to come up with a plan and desperate for help.

A coalition of five Democratic governors said on Monday that state and local governments needed $1 trillion in federal relief or they will be forced to decide between funding public health care programs or laying off teachers, police and other workers.

Democrats in Washington have supported those requests but Republicans have been split over how to help. Some Republicans — including President Trump — have suggested that Democrat-controlled states are seeking a bailout for poor and costly decisions that predate the pandemic, particularly their enormous unfunded pension obligations.

The crisis has even prompted talk of allowing states to go bankrupt, which would probably require a Constitutional amendment.

“I’ve had several congressional staffers reach out to me,” said David A. Skeel, a University of Pennsylvania law professor who sits on the federal oversight board that has helped manage Puerto Rico’s finances after Congress created a bankruptcy-like program for the territory in 2016.

Most of balanced-budget laws’ power lies in perception. A state’s failure to obey its own laws gives it and its leaders a credibility problem: Officials worry it could be used as a political cudgel in re-election races, and about its effect on a state’s bond ratings, which are crucial to its ability to borrow affordably.

States have come up with some novel solutions to the current crisis — New Jersey pushed back the start of its fiscal year, making this one 15 months and the next nine — but their simplest options are to cut or borrow.

In Georgia, for example, budget leaders have instructed all state agencies — everything from the Department of Education to the Forestry Commission to the Administrative Office of the Courts — to find ways to cut spending by 14 percent by May 20. “No exceptions,” they warned in a memo.

Others are borrowing to cover certain cost increases. California, for example, has already borrowed $348 million from the U.S. Treasury under the federal backstop for states’ unemployment insurance funds. On Thursday, Gov. Gavin Newsom also said the state would have to cut spending on education and other government services.

State governments can also raid their rainy-day funds, if they have them. Ohio’s contains $2.7 billion, but Mr. DeWine said he wouldn’t tap into it yet. “Simply stated, we are going to need the rainy-day fund for next year, and possibly the next,” he said.

Many states normally run on razor-thin margins or rely on the fuzzy math surrounding pension fund obligations to keep their contributions low. That makes it easier to balance a budget now, but balloons the gap between what the funds have on hand and what they owe.

The coronavirus has only added to the strain: Stay-at-home orders and frozen economic activity have slashed state sales- and income-tax revenue, while at the same time, costs are going up. Services that are going largely unused, like airports and public transit, must be maintained; while spending has increased on medical equipment, screening programs, hospitals, nursing homes and countless newly unemployed people who need Medicaid.

States and large cities can tap a new Federal Reserve lending program set up in response to the coronavirus crisis. For the first time, the Fed will buy debt from, or lend to, states and cities. The central bank issued rules and pricing guidelines on Monday, suggesting the program will be open for business this month. Because the program is considered a backstop, it will charge higher interest rates to most borrowers, so not to outbid regular investors.

But in some cases, the Fed program may be a better deal.

Illinois, the state with perhaps the country’s most vexing budget challenges, has a credit rating just one notch above junk-bond territory, largely because of its unfunded pension obligations. It was planning to borrow $2.2 billion this month: $1.2 billion in short-term notes to plug a budget gap created when it pushed back its income-tax deadline to mid-July because of the pandemic; and $1 billion in general obligation bonds to pay for, among other things, maintenance during the summer construction season.

But on May 6, the day of the first scheduled sale, underwriters told Illinois that investors weren’t willing to buy the notes unless they were paid an exceptional rate of interest, because of the state’s longstanding financial struggles. Illinois pulled back the offering and placed it on “day-to-day status,” meaning it will still happen if market conditions improve.

On Tuesday, the state did the same thing with the general obligation bonds, although only briefly. Illinois went ahead with just the tax-exempt portion — $800 million — on Wednesday, but will have to pay an eye-watering interest rate that is 4.52 percentage points above the benchmark rate for borrowers with AAA credit ratings. It’s also significantly higher than Illinois’s interest rate the last time it borrowed, in November.

The Fed’s lending program may offer a solution: It would charge the state a 3.8 percent base interest rate for three-year notes. (Each state and eligible large city has an allotment based on its revenue history, and Illinois’s is about $9.7 billion.) And the Fed loans are for the purpose of “operational liquidity,” meaning they could be used to make a budgeted contribution to the state’s pension system, which has become a political football in the debate over federal pandemic assistance.

Illinois has perhaps the worst pension situation in the country, with a shortfall of around $300 billion. The state is now making contributions of about $10 billion a year just for state workers and teachers — municipal pension contributions are separate — and last month the president of the State Senate requested about $40 billion in federal aid, including enough to cover the annual pension contribution. That prompted Mitch McConnell, the Senate majority leader, to say the federal government wasn’t going to bail out states that had mismanaged their finances.

Using federal money to prop up mismanaged state pension funds was “not something I’m going to be in favor of,” Mr. McConnell said. He also suggested that states should be able to go bankrupt, an idea that was quickly attacked by Democratic governors.

Although cities and local governments can use the bankruptcy courts, the only allegory for a state bankruptcy is Puerto Rico. But even that painstakingly slow process might not work well for a state, said Andrew Biggs, a member of the territory’s federal oversight board.

Mr. Biggs, an economist with the American Enterprise Institute, said Puerto Rico had more bond debt than pension debt, while states have the opposite problem. Illinois and its local governments, for example, had $466 billion of unfunded pension obligations — three times their bond debt of $155 billion.

To keep paying its pension obligations, Puerto Rico simply halted interest and principal payments to bondholders. But even if a strapped state were to do the same, it wouldn’t save enough money to keep paying all the pensions.

If states go bankrupt, “it would be much harder for them to settle it by just canceling the debt,” Mr. Biggs said. “It makes much more of a crisis.”