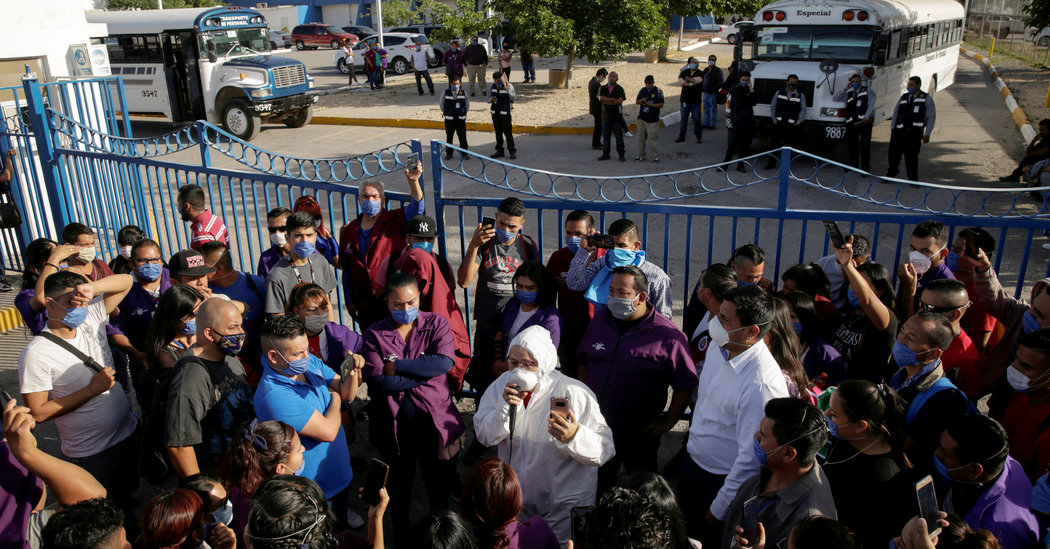 MEXICO CITY — The Trump administration and major U.S. manufacturers have pressured Mexico to keep factories that supply the United States operating during the coronavirus pandemic, even as outbreaks erupt and waves of cases and deaths sweep the companies.

Mexico must be responsive to the United States’ needs right now or, the U.S. ambassador to Mexico has said, risk losing the jobs that these factories provide.

“You don’t have ‘workers’ if you close all the companies and they move elsewhere,” Ambassador Christopher Landau said on Twitter. “Of course health comes first, but to me it seems myopic to suggest that economic effects don’t matter.”

Mexican officials have closed many factories and threatened legal action against those that remain open.

But the dispute highlights how much the two countries have come to depend on one another and how unequal that relationship remains.

Since the signing of the North American Free Trade Agreement over 25 years ago, Mexico has become a manufacturing mecca, attracting foreign-owned factories that employ hundreds of thousands of workers along the border and churn out everything from airplane parts to televisions, largely for the American market.

Now that the response to the coronavirus pandemic is shuttering businesses and factories in both countries, the United States is urging Mexico to allow exemptions for workers whose services are essential — not to Mexico, but to the United States.

This push comes as factories near the border have become key sources of infection, according to Hugo López-Gatell Ramírez, the deputy health minister who running Mexico’s response to coronavirus.

“All companies that refuse to suspend work will have an inspection certificate drawn up,” he said on Twitter. “The health authority will carry out the closure and the public ministry will investigate them for possible public health crimes that could be life threatening.”

The lack of testing in Mexico makes it difficult to determine exactly how many workers have contracted the virus, but in interviews, more than a dozen employees at foreign-owned plants said that their colleagues were falling ill on the factory floor. In some factories, workers have protested the lack of security measures and the requirement that they continue to work during quarantine.

There have been 13 deaths at car seat-maker Lear Corporation, according to Mexican health officials, and at least three at the electrical components company Schneider Electric.

“I’m worried about getting my parents sick,” said Jair Garcia, a 25-year-old engineer’s assistant at Parker Hannifin, an American company that makes parts for car motors in Tijuana. “My mom tells me to take care of myself, but also to keep my job.”

In a news conference on Thursday, Marcelo Ebrard, the Mexican foreign minister, insisted that the country would follow its own timetable on opening factories, guided “by the decisions of the president and by the recommendations made by the health sector.”

But Michael Kozak, an acting assistant secretary at the State Department, said in a briefing with reporters that his agency “has been working very closely with Mexico, advocating for American firms” to avoid disruptions in the supply chain.

And Ellen Lord, the under secretary at the Department of Defense, said on Thursday that its talks with the Mexican government have been successful. “We appreciate Mexico’s ongoing positive response,” Ms. Lord said.

Ms. Lord said she spoke with the American ambassador to Mexico about the closure of suppliers. “These companies are especially important for our U.S. airframe production,” she said in a news conference.

The ambassador then contacted Mexico’s foreign minister, who asked for a letter with details about the issue, said Michael Andrews, a Defense Department spokesman.

The message of the letter the Pentagon sent to the Mexican government was that the United States wanted to reopen plants safely to “minimize the impacts to the military supply chain and national security writ large,” Mr. Andrews said.

“The Mexican foreign minister and the U.S. ambassador are going to take that and try to start getting some of those plants reopened,” he said.

Mexico, which was heading toward recession long before the coronavirus began to spread, is particularly vulnerable to pressure from the United States and from companies that supply the American market.

Now, with the economy expected to contract by more than 6 percent this year as the pandemic hits key engines of Mexican growth — trade, oil, tourism and remittances — those companies are using their clout to persuade local officials and keep their assembly lines humming.

At Hisense, a Chinese company that exports televisions to the United States from a factory in Rosarito, just miles from the border, workers are hustling to keep up production to meet the demands of Americans stuck at home.

Before, people “may have had one or two TVs, and now because everybody’s there, everybody wants to do whatever they want to and they cannot share the TVs that they have,” said Marco Esponda, an executive at Hisense.

The company made the case to state officials that it provided Indispensable communications equipment, and should be kept open. “Television is part of an essential part of our communication systems, keeping our people informed, keeping them at ease,” Mr. Esponda said.

The company did put up plastic barriers between workers, hand out face masks and hire extra buses to ferry people to the factory so they could keep a safe distance from one another, he said.

“I laughed,” said Carlos Lara, a Newell worker, suggesting that there was no shortage of pens. “I think that in stock we have enough ready to deliver for the next three or four months.” A Newell spokeswoman said in a statement that some of the company’s products are sent to hospitals and that it had only a 30-day supply ready.

Coronavirus cases are rising quickly in Mexico, where the government moved slowly to enforce social distancing, and testing has been scarce. According to the official tally, 17,799 Mexicans have been diagnosed with Covid-19, but the government believes the true count is about eight times higher that the official tally. As of Thursday, 1,732 people had died.

In Baja California, the state labor secretary, Sergio Moctezuma Martínez López, has started showing up at factories with the police, handing out fines — and broadcasting the confrontations live on Facebook. He has forced more than 100 export factories to close and sent nearly 80,000 workers home.

Cooper Lighting, an Ohio company, put chains on its doors to prevent workers from leaving, Mr. Moctezuma said. The company said in a statement that the chains were used temporarily in place of broken locks and that workers were “able to exit the primary entrance at any time.”

Mr. Moctezuma said that Safran, the French maker of airplane engines, argued that its work was considered indispensable in other countries — so why not in Mexico?

“For our country, that is not essential for public health,” Mr. Moctezuma said. “If we don’t take these actions with the force of the state behind us, our public health system will collapse.”

At Honeywell, a Boeing supplier with expansive operations in Mexicali, workers have been asking to be relieved of their duties for weeks.

Jorge Rojas, a welder at the factory, said he couldn’t understand why they were not allowed to quarantine if almost no one was flying. “They said we couldn’t go home because we couldn’t bring our tools home with us,” he said.

Mr. Rojas said he spent a lot of time shoulder to shoulder with co-workers while welding metal. He fears bringing the coronavirus home to his family. “We are in close contact, touching the same tools,” he said.

This month, the state shut most of the plant after deciding its workers were not, in fact, essential. It later allowed some employees to return to continue their work servicing commercial Mexican airliners.

A Honeywell spokesman, Scott Sayres, said, “Honeywell always complies with government directives and is committed to cooperating with local and federal authorities.” He said the company had “received excellent feedback from the government on our health and sanitary measures in place.”

Mr. Rojas, the welder, is now at home and worries about how his co-workers will fare in the weeks to come.

“They exposed us to contagion,” he said. “For them, delivering their products was more important than our health.”