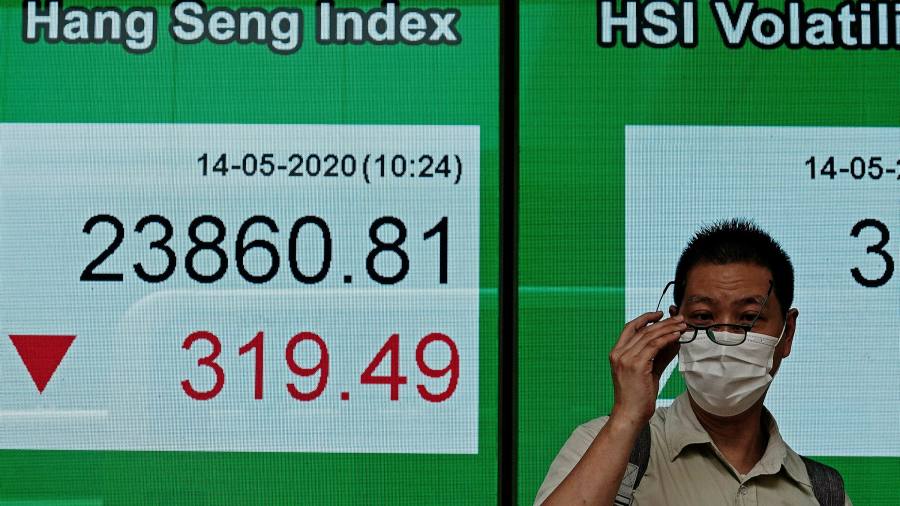 Shares across Asia-Pacific inched higher as fresh signs that China’s economy could be recovering from the coronavirus crisis helped ease investors’ nerves over rising tensions between Washington and Beijing.

On Friday, official data showed that China’s economy continued to improve after it largely managed to contain its coronavirus outbreak. Figures showed growth in industrial output resumed last month, while retail sales and investment in capital goods such as machinery shrank at a slower pace than previously.

“If the recovery momentum continues, China could avoid another GDP contraction” in the second quarter, said Betty Wang, senior China economist at ANZ.

It is also likely that “more policy support [would] be rolled out in the coming months” by Beijing that could help boost investment, added Tommy Wu, lead economist at Oxford Economics.

“Our baseline forecast sees global demand recovering in H2 but rising tension between the US and China is adding to the uncertainty to China’s trade outlook,” Mr Wu said.

US president Donald Trump warned overnight that he could “cut off the whole relationship” with Beijing in the latest escalation of geopolitical tensions as Mr Trump seeks to pin the blame on China for the explosion of coronavirus cases in the US and elsewhere in the world.

“There are many things we could do,” Mr Trump said in an interview with Fox Business on Thursday. “We could cut off the whole relationship. Now if you did, what would happen? You’d save $500bn.”

It was not immediately clear what figure Mr Trump was referring to. Tensions between the two global powers have risen this week after the US government’s main pension fund this week halted a plan to invest in Chinese stocks. Officials cited the risk of sanctions over China’s handling of coronavirus.

The S&P 500 closed 1.2 per cent higher overnight as shares in hard-hit US banks surged, offsetting a slide in industrial stocks. Data showed another 3m Americans had filed for unemployment benefits, taking the total to 36m in eight weeks.

The outlook in futures markets improved following the Chinese data release, with the S&P 500 expected to open flat after initial expectations for a drop on Wall Street. London’s FTSE 100 was expected to rise 0.9 per cent.

Oil prices rose with international benchmark Brent crude up 1.5 per cent at $31.61 and US marker West Texas Intermediate adding 0.9 per cent to $27.80.

Crude on Thursday gained in response to revised estimates from the International Energy Agency that forecast annual demand for oil would fall less than previously expected.

“The fundamentals in the market are clearly improving,” said Warren Patterson, head of commodities strategy at ING. “But we still believe that in the near-term, the upside is limited given that we are still in a surplus environment and as there is plenty of inventory for the market to digest.”