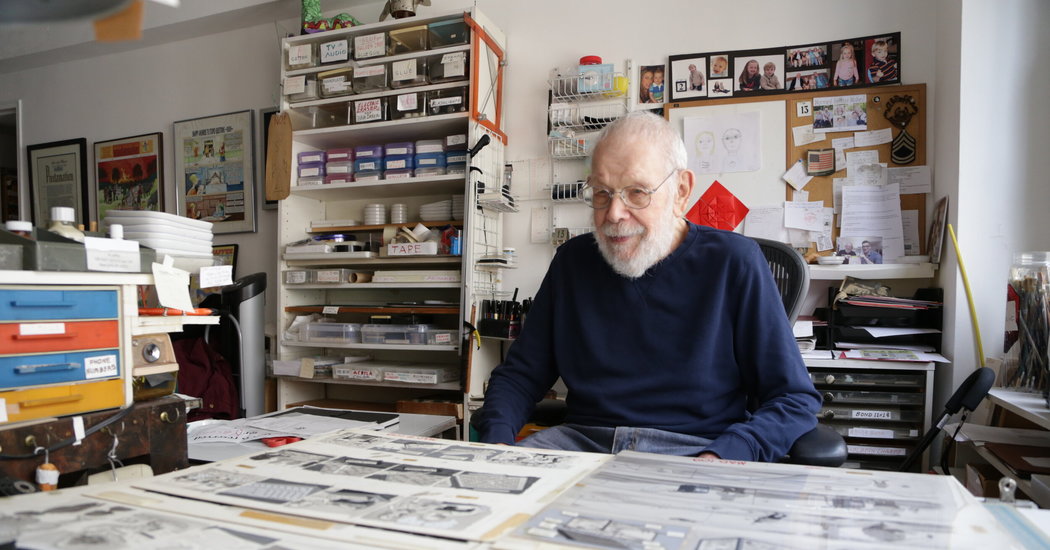 Mad magazine is celebrating its longest-tenured contributor, Al Jaffee, with an issue devoted to him on the occasion of his retirement.

The latest edition of the smart-alecky bible of Boomer humor, billed as the “Special All Jaffee Issue” and available Tuesday, is filled with reprinted and previously unpublished work by or about Mr. Jaffee, the creator of two signature features in the magazine, the intricate Mad Fold-In and Snappy Answers to Stupid Questions.

“I’m 99-years-old — and I stress the old,” Mr. Jaffee said in an interview. “I used to be able to work around the clock and produce a Fold-In or an article, but it is not something I can do anymore.”

Mr. Jaffee came up with the Fold-In in 1964 as a satirical reversal of the centerfolds in Playboy and other magazines of the era. The final Fold-In, which he created in 2014 in anticipation of his retirement, seems suited to a time when businesses have been disrupted by the coronavirus pandemic.

It starts with an image of the magazine’s tooth-deficient mascot, Alfred E. Neuman, looking worried amid stores displaying signs announcing that they have gone out of business. When readers fold the page in thirds, a new message is revealed: “No More New Jaffee Fold-Ins.” And the artist’s serene visage is seen floating above the cityscape.

“I had two jobs all my life,” Mr. Jaffee said. “One of them was to make a living. The second one was to entertain. I hope to some extent that I succeeded.”

Born in 1921, in Savannah, Ga., Mr. Jaffee met some of his future Mad co-conspirators in the 1930s, when they were students at the High School of Music and Art in New York.

He followed a circuitous path to finding like-minded artists. As young boys, Mr. Jaffee and his three brothers were taken by their mother, Mildred Jaffee, to her home city, Zarasai, Lithuania, for what became an extended visit. In 1933, Mr. Jaffee’s father brought Al and two of his brothers back to America for good. The family lived in Far Rockaway, N.Y. Mr. Jaffee’s youngest brother did not leave Lithuania until 1940, shortly before much of Zarasai’s Jewish population died in World War II. The losses included Mildred.

The all-Jaffee issue is in keeping with the recent publishing pattern of Mad. Last July, in a cost-cutting move, the magazine moved largely away from new material in favor of recycled work. That format will continue at least through the end of the year.

The table of contents includes a warning about the old selections: “The vintage Mad pieces reprinted in this issue were produced in a time that was less mindful of and sensitive to the matters of race, gender, sexual identity, religion, and food allergies.”

The first Snappy Answers to Stupid Questions feature, from 1965, appears in the issue. It depicts a man happening upon a driver who has crashed into a tree. The man asks, “Have an accident?” The driver offers three punchline replies: “No thanks! I already have one!”; “No, I’m a modern sculptor!”; “No, I’m starting a junk yard!” A fourth cartoon balloon is left blank, so that readers can supply retorts of their own.

New material includes tributes to Mr. Jaffee by other Mad artists. The cover, by Sam Viviano, depicts him as a doctor examining the brain of Alfred E. Neuman (and finding it lacking). A “Spy vs. Spy” installment by Peter Kuper includes a Fold-In that shows Mr. Jaffee adding to the chaos of the eternally warring secret agents.

Sergio Aragonés provides several interpretations of the 99-year-old artist, including a four-panel biographical strip. A tribute by Tom Richmond shows Mr. Jaffee holding a wine glass filled with ink. The accompanying text offers a salute from the Mad staff, which calls itself “the usual gang of idiots” on the magazine’s masthead.

“Thanks for making us look Idiotic — and making readers look twice — all these years,” the note says. “Mad wouldn’t be Mad without you.”