Australia Asks for Investigation After Police Attack 2 Journalists in U.S. 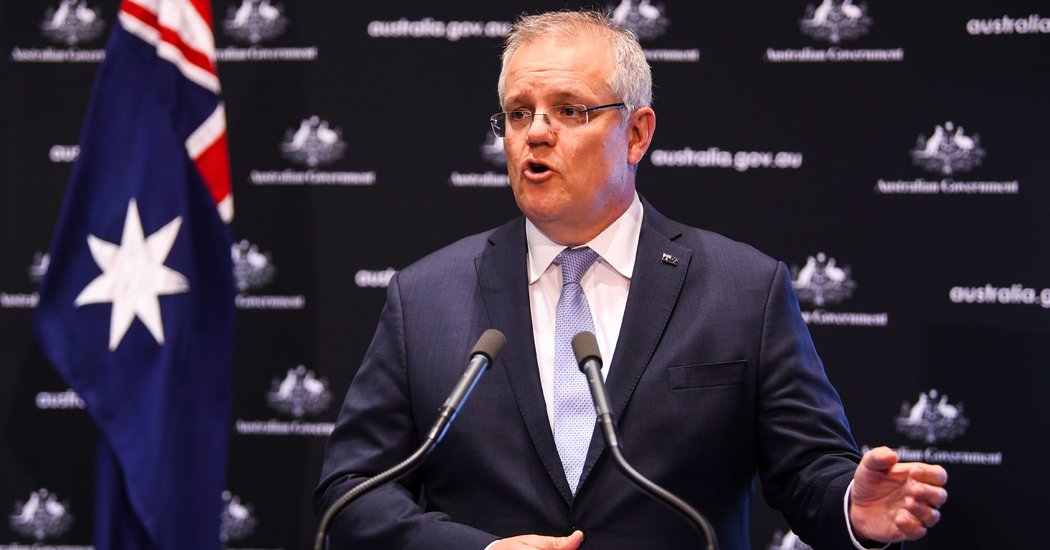 The Australian prime minister has called for an investigation into how police officers treated two Australian journalists who were covering a protest outside the White House on Monday.

The two journalists, on assignment for Australia’s Channel 7, one of the nation’s major networks, were among the members of the news media covering the demonstration as President Trump threatened a crackdown on protests in a speech delivered from the Rose Garden starting at 6:43 p.m.

Shortly before a 7 p.m. curfew went into effect in Washington, officers in riot gear and National Guard soldiers started to disperse the crowd. An officer slammed into an Australian camera operator, Tim Myers, with a riot shield, knocking his camera to the ground. As Mr. Myers and his colleague, the reporter Amelia Brace, started to run, another officer appeared to swing a baton at Ms. Brace’s back.

Mr. Myers was standing still and filming as the officer slammed into him, with the footage airing live on Australian television. When Ms. Brace came back into view, she said: “You heard us yelling there that we were media, but they, they don’t care.” Washington’s ABC affiliate captured the incident from another angle and also aired it live.

It was the latest example of the rough treatment of journalists covering protests by police officers in the United States. In recent days, dozens of reporters and photojournalists documenting protests have been arrested, hit with projectiles or shoved by the police, or aimed at with weapons, even after identifying themselves as members of the media.

Once the officers in Washington and National Guard soldiers had cleared the area with the help of tear gas, rubber bullets and flash-bang explosives, Mr. Trump walked to nearby St. John’s Church and posed for photographs, a Bible in hand.

Mr. Sinodinos said in a statement to The New York Times that he was providing consular support to the two journalists, both of whom are Australian citizens.

“I understand that Channel 7 will make a formal police complaint asking to have the matter investigated,” Mr. Sinodinos said. “We are in discussion with the State Department, and they have offered assistance to identify where the complaint should be targeted.”

A spokesman for Channel 7, Craig McPherson, said in a statement to The Times that the attack on Mr. Myers and Ms. Brace was “nothing short of wanton thuggery.”

The U.S. ambassador to Australia, Arthur B. Culvahouse Jr., issued a statement of support for the news media on Tuesday, although he did not directly address the Channel 7 journalists.

“Freedom of the press is a right that Australians and Americans hold dear,” Mr. Culvahouse said on Twitter. “We take mistreatment of journalists seriously, as do all who take democracy seriously.”

Demonstrators had gathered outside the White House to protest the death of George Floyd in police custody on May 25 in Minneapolis. Mr. Trump, who had been sheltering in an emergency White House bunker meant to protect presidents from attacks, previously threatened protesters with “vicious dogs” and “ominous weapons.”

Bishop Mariann E. Budde of the Episcopal Diocese of Washington, which includes St. John’s, expressed outrage at the tactics used on the crowd to clear a path for Mr. Trump and denounced his using the Bible as a prop.

Ms. Brace, speaking to The Times on Tuesday night from Washington, where she was covering another protest for Channel 7, described Monday’s events as “absolutely terrifying.” She said she had a bruise from the hit to her back, and she and Mr. Myers had welts from the rubber bullets.

“I’ve been in protests just as serious as that, but I’ve never, ever seen police behave that way, not just to the media but to the protesters on the street,” Ms. Brace said. “It was brutal and just so fast. There was no opportunity for people to get out of the way if they wanted to and that’s what I found really confronting and alarming.”

She added that journalists needed to be able to do their job safely while covering the protests in order to tell the story.

“If we’re getting attacked, it’s just another part of democracy falling down here,” she said.