Autoworkers Are Returning as Carmakers Gradually Crank Up Factories 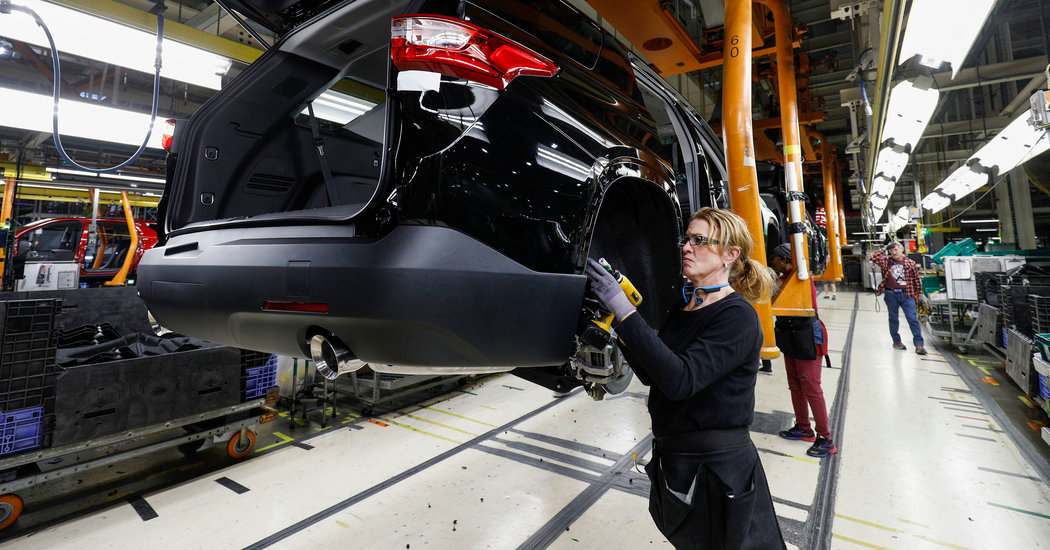 After sheltering at home for nearly two months, tens of thousands of autoworkers have started streaming back into car and truck plants across the South and Midwest, a critical step toward bringing the nation’s largest manufacturing industry back to life.

In April, automakers, which were closing plants at various times, produced just 4,840 cars, pickup trucks and sport utility vehicles in North America, according to Automotive News, down from 1.4 million a year earlier. Sales of new vehicles in April fell by about 50 percent, according to Cox Automotive, a market researcher.

“The auto industry is America’s economic engine,” Ford Motor’s chief operating officer, Jim Farley, said during a recent conference call on the company’s reopening plans. “Restarting the entire auto ecosystem is how we restart the economy.”

Ford, General Motors, and Fiat Chrysler plan to restart production on Monday, after Toyota, Honda and Tesla began reopening plants last week. Hyundai restarted a plant in Alabama on May 4.

But production will not bounce back quickly. The revival will unfold over a week or more as dozens of auto plants and hundreds of factories owned by parts suppliers gear up and start making and shipping products. The speed with which companies can move will depend in part on how quickly national, state and local governments loosen stay-at-home orders in the United States, Canada and Mexico, because the industry’s supply chains are closely intertwined across North America.

Some automakers have already run into complications.

Tesla, for example, and its chief executive, Elon Musk, were so eager to resume production last week at the company’s factory in Fremont, Calif., that they defied local officials and sued the county.

Mercedes-Benz restarted an S.U.V. plant in Alabama on April 27, but stopped production on Friday after running short of parts. Volkswagen was scheduled to start making cars at a plant in Chattanooga, Tenn., on Sunday — two weeks after it had originally hoped to bring workers back, because many of its suppliers needed more time to get up and running.

The automakers announced in mid-March that they would shut down their plants as the coronavirus spread and cases started surging in the Northeast, Louisiana and the Detroit area, where the three biggest U.S. automakers are based. The risk of infection is considered high for assembly-line workers because they often spend long hours working alongside one another.

While many of the automakers’ white-collar employees have been able to work from home, the shutdowns idled nearly 400,000 automotive production workers in April, according to the Bureau of Labor Statistics. The industry accounts for about 4 percent of the nation’s economy.

There is little precedent for such an across-the-board shutdown, said Erik Gordon, a business professor at the University of Michigan. Of course, strikes have forced individual car companies to shut down periodically; one last fall idled G.M. plants for 40 days. But Mr. Gordon, who has long tracked the industry, couldn’t think of a time when the three big companies, their suppliers and many dealers had to shut down at the same time.

During World War II, the industry stopped making cars, but its plants were retooled to make armaments and kept millions of people employed, Mr. Gordon noted. “There’s really nothing we can compare this to because it’s the entire industry, and its supply chain, that has closed down completely,” he said.

Now, the industry faces another daunting task that it has never faced: restarting production during a pandemic.

Automakers have made numerous changes to reduce the risk of infection, including slowing down the rate at which they churn out cars. Most manufacturers plan to shorten shifts, with more down time in between for cleaning. Employees will also be required to stagger their arrival and departure to reduce contact with others during shift changes.

Ford, G.M. and Fiat Chrysler will ask workers to fill out questionnaires and have their temperatures taken before reporting for work. The goal is to identify anybody who may have symptoms or has been in contact with somebody who is or has been ill. Workers will be required to wear masks, gloves and eye protection while on the job.

Fiat Chrysler has installed thermal-imaging cameras in some hallways and entryways to check workers for fevers. On its assembly lines, the company has set up transparent curtains to prevent transmission between people who work next to each other. At some stations where two workers install under-the-hood components at the same time, the company has developed screens that can be placed on engines.

Ford has placed portable sinks and hand-sanitizer dispensers throughout its plants and installed no-touch faucets and soap dispensers in restrooms.

Under guidelines worked out with the United Automobile Workers union, employees will have to get tested for the virus if they show symptoms. G.M., Ford and Fiat Chrysler, however, are not planning to test workers daily or weekly even though the U.A.W. has pushed for it. On Saturday, Ford said it had secured contracts with health care providers in southeastern Michigan; Louisville, Ky.; Kansas City, Mo.; and Chicago to test symptomatic employees and provide results within 24 hours.

“We continue to advocate for as much testing as possible at the current time and eventually full testing when available,” the union’s president, Rory Gamble, said in a statement.

In Louisville, the home of two Ford plants that make trucks and large S.U.V.s, many workers are looking forward to getting steady paychecks again but also a little worried, said Todd Dunn, president of U.A.W. Local 862.

“Everybody is burning cash,” he said. “And the company needs to produce, or we won’t have a company to go back to.”

Still, the risk of sickness and the complexities of a new safety policies are weighing on workers.

It will probably take many months before the industry is producing as many cars as it was before plants shut down. The delicate restart of production will probably unfold slowly over at least a week or more as dozens of auto plants and hundreds of others owned by parts suppliers resume manufacturing and shipping operations dependent on the loosening of stay-at-home orders in the United States, Canada and Mexico.

G.M., which had been running two or three shifts in its North American plants, will start most plants on a single shift per day, something automakers try to avoid. The company said it was not yet sure if it would be able to restart its three plants in Mexico on Monday.

Toyota’s North American plants restarted last week, operating on one or two shifts a day. Honda reopened its plants but isn’t seeking to increase production quickly, to give crews time to become accustomed to new safety procedures and working conditions.

For now, there is no great urgency for automakers to ramp up manufacturing, because auto sales are not expected to recover fully anytime soon.

AutoNation, the country’s largest dealership chain, reported last week that sales of new and used cars at the end of April were down about 20 percent from a year earlier, after falling 50 percent in the first 10 days of the month. Some people were buying cars because they were avoiding public transit and shared transportation services, the company’s chief executive, Mike Jackson, said.

“I think this will be a very difficult restart and they need to get on with it,” Mr. Jackson said about the automakers. “But I can see where if plants don’t restart, in a month or two there’s going to be some inventory issues.”