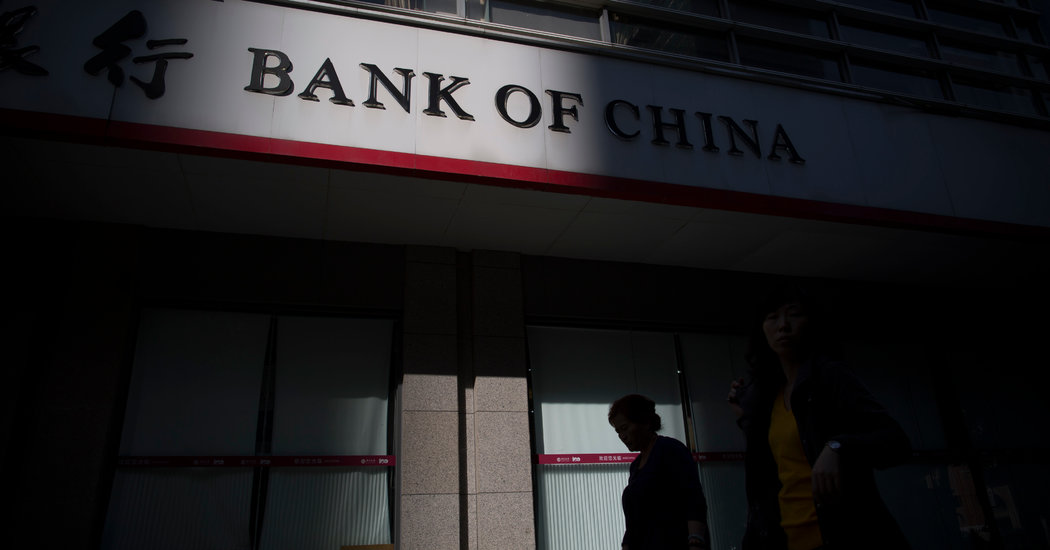 The pitches, from one of China’s biggest and most established banks, made the investment seem like a sure bet.

“Oil is cheaper than water” was the slogan for an investment product, called Crude Oil Treasure and sold by Bank of China, that was pegged to the price of petroleum. In one cartoon ad, two men at a gasoline station lament the price of fuel when a third tells them that they should buy barrels of crude instead. “You can make money no matter if the price rises or falls,” he says.

And when they protest, they are often silenced by the authorities. Crude Oil Treasure investors said the police had called and visited them to make sure they would not cause a public fuss.

China’s carefully cultivated image of a strong government that can shield its citizens from the whims of the global market is at stake.

“This product completely exceeded what we can bear,” said Chen Xueming, an investor in Crude Oil Treasure who has a son about to head to college.

It is not clear how many people invested or how much they bought, but the bill for Bank of China could be as much as $1.4 billion, according to Shujin Chen, an analyst at the brokerage Jefferies, based on reports that the lender had 60,000 investors in the product.

The authorities have moved to limit the damage. China’s banking regulator said it was investigating. The country’s top leadership has spoken out about the lack of investor protections in volatile markets.

A Bank of China spokeswoman in Hong Kong declined to answer questions. On May 5, the bank said it would try to protect clients’ interests, was negotiating settlements and would respect judicial decisions if it ended up in court with investors.

China strictly limits moving money abroad in part to protect its people from global market turbulence. It also restricts retail investors from trading in foreign commodity markets. But Bank of China and others in recent years have sold their customers investments that track global markets, exposing them to big risks as well as potential rewards.

China is still working to offer its people — traditionally relentless savers who would sock away their hard-earned savings under mattresses or in the bank — safe and diverse places to park their money. Its stock market has historically been volatile, and many Chinese investors consider it rife with insider trading. Its bond market is still limited. Housing is China’s most popular investment vehicle, but that market is prone to bubbles and government intervention.

A confluence of events, some of it just bad timing, hurt Bank of China and Crude Oil Treasure investors. But the bank’s poor oversight also played a role, experts say.

“This product is quite risky, and Bank of China itself did not anticipate such a risk,” said Wu Dong, a partner at Hui Ye Law Firm in Shanghai and an expert in finance law.

“Such operational risks are definitely not suitable for ordinary investors,” he added.

The hit stemmed from a crisis in the global oil markets. The coronavirus outbreak slashed global demand at the same time that Saudi Arabia and Russia were engaged in a production war.

On futures markets, where monthly contracts representing barrels of oil are traded, panicked investors drove prices to new lows. Investors scurried to get out of the May contract, which expired on April 20. Anybody holding the contract when it expired had to take physical possession of the oil.

Bank of China’s Crude Oil Treasure expired on April 20, when the price of oil was racing to zero. To make matters worse, a market rule change made that month allowed the price of oil to go negative. When the dust settled, Bank of China priced its product at -$37.63 per barrel, the final price of the May contract.

“I think listing the Crude Oil Treasure in the bank’s wealth management section can be a problem for misleading investors,” said Ms. Chen, the Jefferies analyst.

Investors took to online forums to complain. They traveled to the bank’s local branches. Some threatened to go to Beijing to petition the central government. In one public letter, a group of investors accused the bank of “pure gangster logic.”

“As a leading state-owned listed company under the leadership of the party and the government, you are based in the capital of the country,” these investors wrote. “Do you think your above-mentioned behaviors matched your responsibilities and status?”

The police response was swift. Online, Crude Oil Treasure investors said members of their family and even colleagues had received calls and visits from local police officers worried that the investors would cause a scene.

On May 4, the Financial Stability and Development Committee, led by Liu He, China’s vice premier, issued a statement highlighting the risks in international commodities market and the need to “protect the legitimate interests of investors.”

A few days later, various Bank of China branches made settlement offers, according to investors. Some promised to pay 20 percent of their original investment. Those who took the deal had to agree to stop any legal action.

“You have suffered losses for investing in the Crude Oil Treasure product. For this, we feel for you and are willing to make an effort to go through this hard time with you,” Bank of China told investors in a message on its mobile app that was seen by The New York Times.

Other investors are balking. One investor, surnamed Mr. Ma, said his losses had totaled $240,000. Mr. Ma, who requested that his first name not be published, has not yet told his family. He worries his wife will divorce him if she finds out.

Mr. Ma said he had decided to try Crude Oil Treasure after his restaurant was shut for weeks because of the coronavirus outbreak. He thought it could be a chance to make up lost revenue. Mr. Ma said he had trouble sleeping. At one point he began but did not complete a suicide note.

“I feel like the Bank of China is bullying its customers because it is a big organization,” Mr. Chen said.

But he relented. On Tuesday, he said, local police officers and Bank of China officials showed up at his office to speak with him and his colleagues, who had also invested in Crude Oil Treasure, and his managers. Feeling pressure, he agreed to a settlement that left him about $1,300, or about one-fifth of what he originally invested.

“We did not want to get entangled in this incident,” Mr. Chen said.