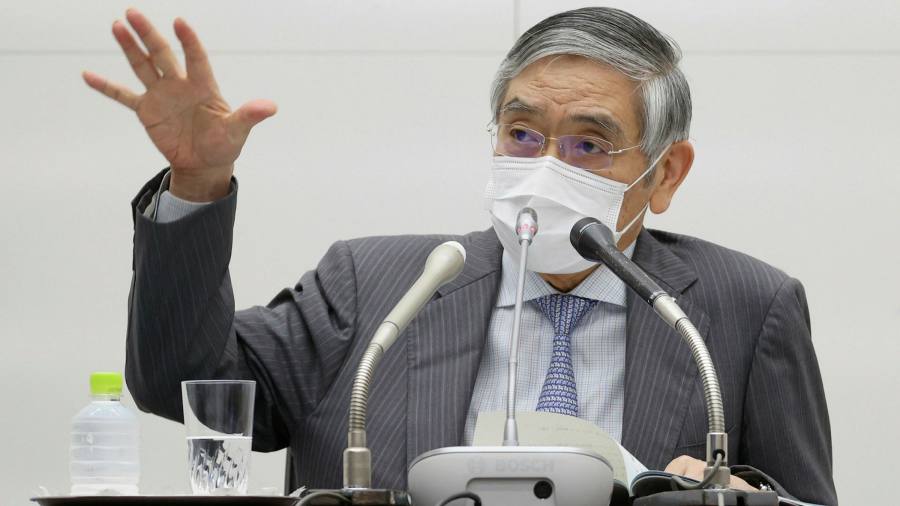 The Bank of Japan has boosted its coronavirus lending programme to more than $1tn but kept monetary policy on hold as governor Haruhiko Kuroda signalled on Tuesday that it would be years before there would be any rise in interest rates.

Mr Kuroda made clear that the Japanese central bank was preparing for a long struggle against coronavirus as he warned that the global economy was in an “extremely severe situation” with the risk of a second wave of Covid-19 infections.

The BoJ’s decision suggests the central bank will keep looking for ways to prop up the financial sector but that it sees no scope to add more monetary stimulus at the moment.

The Covid-19 programme, now raised from ¥75tn to ¥110tn ($1.02tn), provides zero interest loans to banks if they boost lending to companies. It is aimed at avoiding a liquidity crunch but the actual amount of BoJ financing would depend on corporate demand to borrow from the banks.

The main lending programme amounts to ¥90tn with another ¥20tn to buy commercial paper and corporate bonds. The BoJ said the total size would be “¥110tn + alpha” — suggesting it could yet rise further.

Mr Kuroda said “businesses are still under severe cash flow stress” but the response by the government, the BoJ and the banks would help to keep them afloat.

The BoJ left overnight interest rates on hold at minus 0.1 per cent and continued to cap 10-year bond yields at about zero per cent. It said it would keep buying exchange traded equity funds at an annual pace of ¥12tn. The central bank voted for the policy by a majority of 8-1.

Mr Kuroda said he still expected the economy to recover later in the year, noting that “business and household expectations for medium and long-term growth haven’t fallen so much”.

But he sent a strong signal that Japanese interest rates would not rise for the foreseeable future. “Whether it’s fiscal year 2021 or 2022, we’re a long way from a situation where interest rates can go up,” he said. The 2022 fiscal year runs until March 2023.

In a rare reference to another central bank’s activities, Mr Kuroda said it would be hard for the BoJ to raise interest rates before the US Federal Reserve.

“Although the BoJ’s assessment of the economy and prices was more severe than at the last [monetary policy meeting], there were no major surprises,” said Tetsufumi Yamakawa and Kazuma Maeda, economists at Barclays.

“With fiscal expenditure under the government’s emergency economic measures set to kick into gear and financial conditions remaining accommodative, the BoJ appears to have put further action on hold to monitor the effects of the various monetary easing measures it has taken to date.”