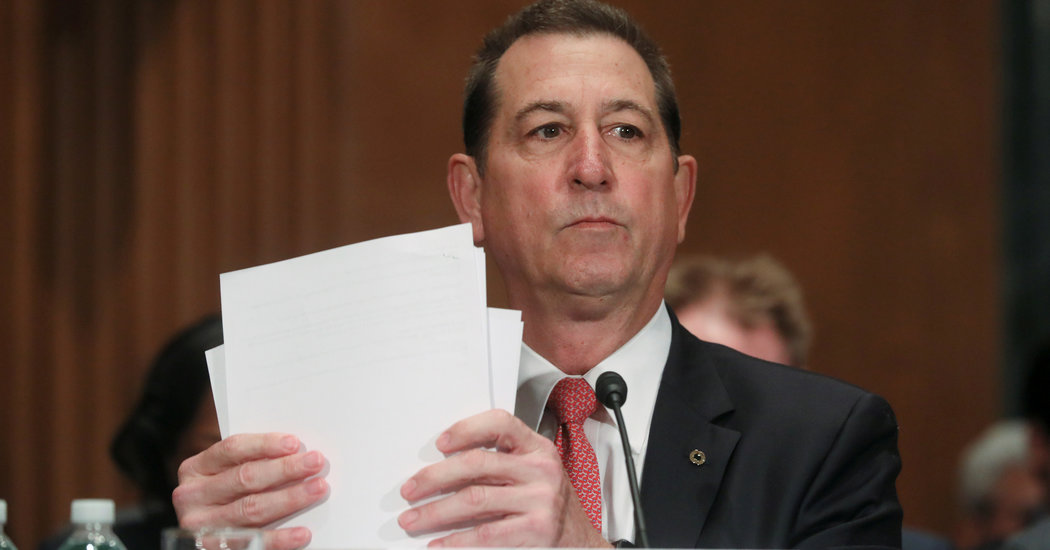 Joseph Otting came into his job overseeing the nation’s biggest banks in late 2017 determined to rewrite the rules governing how financial institutions invest in poor communities.

A former banker appointed by President Trump, Mr. Otting had long chafed at the rules. So as Comptroller of the Currency, he wasted little time seeking the support of banks, which stood to benefit from the revision, as well as the industry’s two other primary regulators, the Federal Reserve and the Federal Deposit Insurance Corp., and community groups. Everyone agreed that an overhaul was needed.

But last week, when Mr. Otting introduced a revised rule — his signature accomplishment as comptroller — he cut a lonely figure. Banking trade groups said it had been put together hastily without enough testing. The Fed and F.D.I.C. refused to sign on. And community groups fear that the revision would ultimately hurt the poor.

Mr. Otting, who is stepping down on Friday, is leaving behind a fractured landscape around a vital piece of banking legislation: the Community Reinvestment Act of 1977, which requires banks to invest in poor communities and lend to low-income individuals in the areas where they do business.

Critics say that the revised rules have the potential to defang the C.R.A. by making it easier for banks to meet their obligations — for example, by letting them get credit for financing a few big projects in low-income neighborhoods that they would have done anyway, rather than offering banking services, which can be less lucrative but more important to the broader community.

It will also cause regulatory disarray, perhaps for years. Banks with different overseers must figure out if the new rules apply to them and spend millions of dollars to comply. Even then, the rules could change again if a Democrat is elected president in November.

“I told him: This is a legacy opportunity. If you do this right, no one will touch it for 15 or 20 years,” said David Dworkin, the chief executive of the National Housing Conference, who worked as a senior policy adviser at the Treasury Department from 2012 until 2018. “There are many people who believe that he wanted to gut C.R.A.,” Mr. Dworkin said. “I can’t make that judgment, but I can say that what he has done will gut it.”

Mr. Otting does not see it that way. “I believe the rule finalized by the O.C.C. will make a positive difference for all low- and moderate-income communities across the nation — many of which were ignored under the previous rule,” he said in a statement to The Times last week. “I fully support a stronger C.R.A..”

A spokesman for Mr. Otting’s office said that even though the other regulators did not sign on, the banks that conduct 70 percent of the activities that are assessed under the reinvestment act are subject to the new rules. (Banks with assets below $2.5 billion can choose not to submit to the regulations.)

The reinvestment act was established to prevent redlining — a practice in which banks refused to lend in certain neighborhoods based on race, ethnicity or income — and ensure that less affluent communities had fair access to financial services.

Compliance is crucial for banks: Mergers and other regulatory approvals are contingent on it. Currently, banks are required to carry out a certain amount of economic activity — either lending, philanthropy, or other banking business — in low-income areas that usually align with their physical locations. But the law has become somewhat outdated in the era of online banking, because banks can attract customers and do business in areas far afield of their branch networks.

Years before he was comptroller, Mr. Otting collided with the C.R.A. as chief executive of a California bank called OneWest — then owned by Treasury Secretary Steven Mnuchin. In 2014, OneWest and another bank, CIT, agreed to a $3.4 billion merger. Community groups nearly scuttled the deal by arguing that both banks had dismal records of complying with the reinvestment act.

One such group, the Greenlining Institute, alleged that Mr. Otting had created the illusion of grass-roots support for the merger using a form email that could be personalized and sent in with a few clicks. According to the Fed, 2,093 of the 2,177 comments ultimately submitted in favor of the merger were identical form letters.

Regulators approved the merger after both banks pledged to increase their activity in poor communities, but Mr. Otting has said the experience left him with a sour taste.

“I went through a very difficult period with some community groups that didn’t support our community, who came in at the bottom of the ninth inning, that tried to change the direction of our merger,” he said at a banking conference in April 2018, The Wall Street Journal reported. “And so I have very strong viewpoints.”

Even before Mr. Otting arrived in Washington in November 2017, Treasury officials were working on a plan to update the rules. A group of policymakers held more than 90 meetings with banks, community groups and trade organizations to determine the best way to reshape the requirements. They created a blueprint and presented it to Mr. Mnuchin, who signed off and sent it to the White House, and then to regulators.

Mr. Otting decided to do his own research. Last year, he toured multiple cities to talk about the law and listen to community feedback. He wanted to redo the rules based on his experience as a banker, he said, making them clearer and easier to follow. In December, he proposed a sweeping rewrite, and initially secured support from the F.D.I.C.

His plan specified which products, services and projects banks could undertake to fulfill their duties and boiled down the evaluation of their work in poor communities to a single metric. But it took away the most important tool that regulators and community groups had to hold banks to account — the discretion to argue that even if banks’ activities looked good on paper, they weren’t significant enough to help communities.

Officials at the Fed felt that Mr. Otting’s proposal was poorly designed and began working on an alternative. When the central bank asked to include its own proposal for comment from stakeholders, Mr. Otting shot the idea down, according to two people familiar with the process. The Fed, led by Chair Jerome H. Powell, decided to let the O.C.C. go its own way.

Negative reaction to the proposal was swift. Representative Maxine Waters, chairwoman of the House Financial Services Committee, called it “misguided” and said any changes to the law must not be rushed through.

Community groups also attacked the plan, saying it could deprive poor and minority communities of access to credit. Banks, despite wanting a C.R.A. revamp, were also unhappy with Mr. Otting’s rewrite.

The American Bankers Association, the largest of the bank trade groups, warned against finalizing the rule without extensive improvements, followed by testing of its measurement methods and a pilot program.

Much of the concern stemmed from the short time-frame that Mr. Otting envisioned for getting the new rule vetted. Banks and community groups had just 90 days to comment before his office would finalize it.

Then, the pandemic struck. Lawmakers and bank lobbyists asked Mr. Otting to put the rewrite effort on hold. In a March 30 letter to federal regulators, the Independent Community Bankers of America, another trade group, asked for a 180-day pause on the effort. Earlier this month, Senator Robert Menendez, a New Jersey Democrat, asked Mr. Otting to ease up on the process during a Senate Banking Committee hearing. Mr. Otting declined.

Last week, the O.C.C. released a final rule that softened some of the most extreme conditions singled out for criticism in Mr. Otting’s proposal, including the use of a single metric to evaluate bank compliance. The Fed and the F.D.I.C. sat it out. “While the FDIC strongly supports the efforts to make the CRA rules clearer, more transparent, and less subjective, the agency is not prepared to finalize the CRA proposal at this time,” F.D.I.C. Chairwoman Jelena McWilliams said in a statement.

It is not clear what Mr. Otting, 62, intends to do next. For now, he is headed home to Las Vegas, where he co-owns a golf course.