Be a Friend to the Elderly, Get Paid 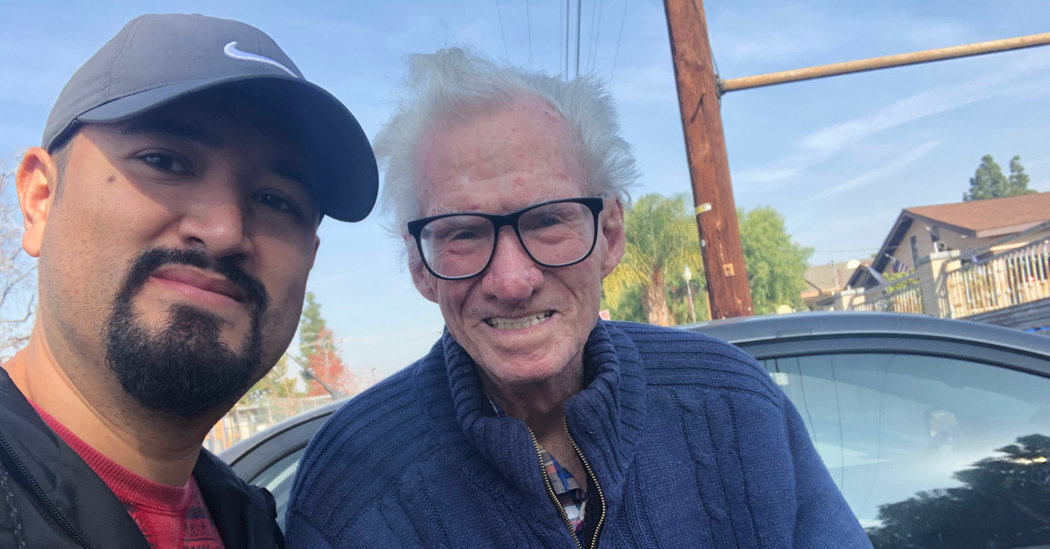 Bill Rodger, 91, often finds himself sitting on a worn flower-print couch in his living room in North Hollywood, Calif., facing a wall of accolades that document his long life.

There are photos of Mr. Rodger over the decades winning sports tournaments and posing with grandchildren. There are golf medals, plaques and the most recent addition, a monthly bird calendar.

“I’d rather be busy, but I haven’t been busy in a really long time,” Mr. Rodger said in late January from this position, his voice trailing off. “I guess going to the doctor keeps me busy.”

The admission warranted a warm pat on Mr. Rodger’s shoulder from a smiling young man sitting beside him. Ricardo Figueroa, 31, isn’t a family member or caretaker or even a neighbor. He’s a paid companion who was connected to Mr. Rodger through Papa, a health tech company that provides “grandkids on demand.”

Before the new coronavirus pandemic, the two spent multiple hours together each week — running errands, going to dialysis appointments, or just watching movies. Today, their relationship is restricted to phone calls but they remain close.

“The whole situation is so scary,” said Mr. Figueroa on the phone, from his home. “So just talking to him is so uplifting.”

Likewise, Mr. Rodger said, “It’s good to hear from him!”

The two men are a good match by design. Founded in 2018, Papa pairs older adults with college students and young workers who have common interests and hobbies. Mr. Rodger and Mr. Figueroa are both military veterans who enjoy documentaries, sports and an occasional beer, and they live within a few blocks of each other.

But whereas the 5,000 Papa pals once played card games or worked on memoirs with the seniors they have befriended, today they are FaceTiming or calling each other to discuss a world in disarray.

Some have shifted to running errands, picking up groceries or prescriptions. For these and other tasks, they make between $11 and $14 an hour, not including tips and covered expenses like gas, on a freelance basis. (Papa is currently available in 20 states; the company typically charges clients $20 to $25 an hour.)

Despite the low wage, this is still vital work. According to a 2018 AARP Foundation survey, roughly one-third of older adults in the United States are socially isolated, a state that is linked to increased health risks, including heart disease, cancer, depression, diabetes and suicide. Vivek Murthy, the former United States surgeon general, has written that loneliness and social isolation are “associated with a reduction in life span similar to that caused by smoking 15 cigarettes a day.”

And the problem has an impact on the health care system. Last year, there were thousands of emergency room visits in Dallas that had nothing to do with physical ailments at all. The patients were just completely socially isolated, without anyone to turn to for help.

“Loneliness is now finally being recognized as a disease, not only at a personal level, but also from a health care perspective,” said Andrew Parker, 32, who founded Papa in 2018.

His company is one of several that aims to be a stopgap, and health insurers who may be looking to cut costs have begun to take notice.

Mr. Rodger’s family is paying for Papa because of a conundrum: Mr. Rodger’s granddaughter Tanya Martin had been his primary caretaker for more than four years. But once Mr. Rodger needed dialysis, it became too much for her to handle with her full-time job as an airplane mechanic.

He didn’t qualify to have further assistance covered by his health insurance, but he also couldn’t afford a private caretaker, which can cost about $300 a day in Los Angeles, according to the prices Ms. Martin was quoted.

“He doesn’t need medical care — he needs another me,” said Ms. Martin, 40, who discovered Papa through a Google search.

During the pandemic Ms. Martin is working from home, but she still doesn’t have enough time to simultaneously care for grandfather and 8-year-old son. The new arrangement is that Mr. Figueroa checks in on Mr. Rodger socially, while another Papa pal transports Mr. Rodger to dialysis. “There’s no other option,” Ms. Martin said. “This saved my home, saved my career.”

It’s a very tough time to be one of the 1.5 million Americans who currently live in nursing homes. About one-fifth of U.S. virus deaths are linked to nursing facilities, and employees, who are often poorly paid and have multiple jobs, are overtaxed and afraid for their own families. Visitors have been banned, heightening the atmosphere of fear and isolation.

Even before the pandemic, caregivers and aides were often overtaxed, tasked with helping many other residents and with little time to socialize. Emotional support can be hard to come by.

“There’s no real meaningful conversation,” said Liz Barlowe, the president of the Aging Life Care Association, a nonprofit representing senior care professionals. “There is that lack of connectedness, of being present and hyper-focused on one person.”

One of those volunteers is Morgan Steele, 25, a clinical research coordinator at Stanford University.

She was recently paired with Hugh Ping, 77, with whom she chats several times a week. Mon Ami suggests that companions and clients chat for 15 to 30 minutes at a time, “but we can talk well over half an hour without even realizing it,” Ms. Steele said.

Ms. Hugh’s daughter, Deanna Ping, said it has been challenging to strip her sociable father from the small interactions that were “very major to him”: He loved venturing out from his home in the Bay Area to go to the drugstore and to restaurants where he knew all the staff.

“It brings me a lot of peace to know there are others to talk with him,” Ms. Ping said.

Often, in conversation with Ms. Steele, Mr. Hugh compares the current situation to having lived through the Cuban missile crisis when he was in the Air Force. “He talks about a time where people didn’t know if their whole world was ending,” Ms. Steele said.

It helps keep things in perspective. “We think we have it bad when we’re working from home with our significant other or roommates, but then you start to realize there are people who are literally so alone,” Ms. Steele said. “A half-hour call can really brighten their day.”

For paid companion positions, both Papa and Mon Ami screen potential candidates through in-depth interviews, as well as through background and motor vehicle checks. (The volunteer bank is far less intensively screened, though still requires an application.)

While a majority of companions have relevant experience — as nurses, social workers or medical school students — Ms. Zhang said Mon Ami looks for those who possess social and emotional intelligence skills, those who “can be present and can engage with someone who is very different from you.”

It’s an appealing gig for students with flexible schedules or for those who now find themselves with time on their hands. (Mon Ami companions work an average of four hours per week.) But the benefits go both ways. The start-up routinely hears that the work does as much for their emotional well-being of many of companions as it may do for the seniors.

Ms. Dangerfield-Cha is clear that Mon Ami is but one option in an industry suffering from a senior care shortage. About 10,000 people turn 65 each day, and 43 percent envision aging in their primary home. Estimates from the Census Bureau indicate that Americans over the age of 65 will comprise nearly 20 percent of the total population by 2030.

“The reality is that as our society is aging more rapidly than at any other time in history, we need all types of support,” Ms. Dangerfield-Cha said. “We’re going to need all of it — and then some.”

To that point, AARP data shows that those who are socially isolated cost an additional $6.7 billion in Medicare spending; Papa already works with 10 health plans, including Humana, Aetna and Florida Blue, and the company is pursuing more partnerships, including offering the service to new parents and other caregivers. It has raised $12.6 million in venture funding to date.

As it expands, Papa is also working to safeguard its continuing companionships, like that of Mr. Figueroa and Mr. Rodger. Not that the two need much oversight. They already have big plans once the world reverts to normal.

“I want to get into golfing now, thanks to him,” Mr. Figueroa said of Mr. Rodger. “As soon as we’re clear to go out, we’re definitely going to get out there in the field.”

Mr. Rodger, excited by the prospect of a day on the putting green, couldn’t contain his enthusiasm — or his grandfatherly tendencies. “I have some pointers,” he said. “I could help you.”