Ben Benson, Who Put Singles in a Bar and Steak on the Tables, Dies at 89 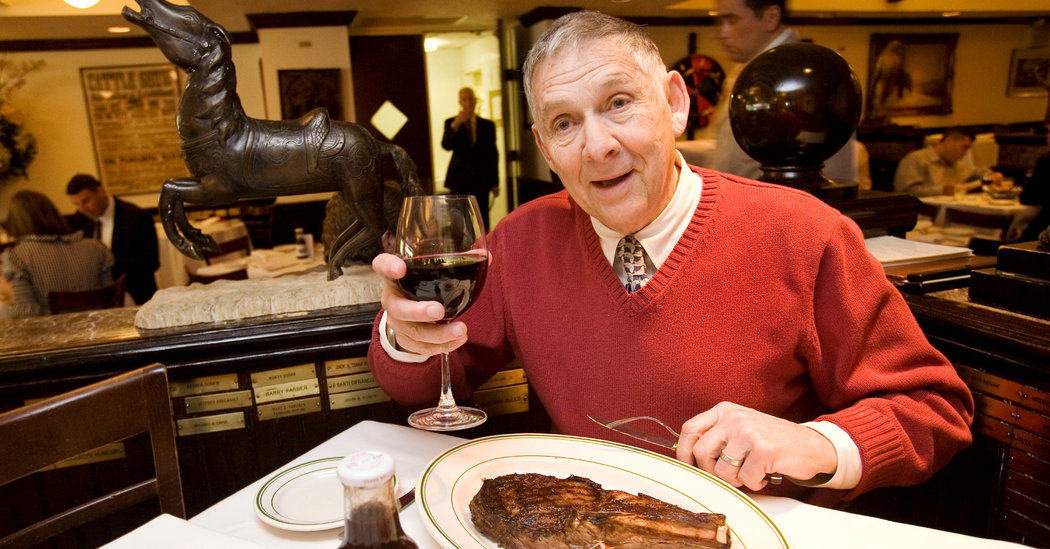 People used to call Ben Benson’s the most famous steakhouse nobody’s ever heard of.

The clubby theater district hangout that might host Paul Simon one night and Walter Cronkite the next did not have the cozy historical resonance of Keens or the stark light and Brooklyn swagger of Peter Luger. In the pantheon of the great New York steakhouses, it was low on the list.

But it wasn’t for lack of trying on the part of its namesake, Ben Benson, a sharp-witted, fun-loving restaurateur who got his start helping his former college buddy more or less invent the singles bar when they ran the original TGI Friday’s in the 1960s.

To a certain generation of New Yorkers, Mr. Benson’s voice from a radio jingle is as embedded in memory as his clever newspaper ads perfectly timed to both promote and provoke. The most famous came in the wake of the 1985 murder of Paul Castellano, then the boss of the Gambino crime family. Mr. Castellano and an aide were shot on the sidewalk heading into Sparks Steak House on Manhattan’s East Side. The ad featured a photograph of the crime scene and the tagline “Eat at Ben Benson’s. It won’t kill you.”

Mr. Benson died on April 29 at NewYork-Presbyterian Allen Hospital in Manhattan. He was 89. His sister, Laura Sunday, said the cause heart failure and other organ failure.

Bennett Benson was born on Feb. 14, 1931, in Brooklyn to Dr. Benjamin and Irene (Miller) Benson. His father, was a general practitioner of medicine. His mother was a collector of antique furniture, clothing and jewelry and opened a store on Second Avenue in Manhattan.

As a teenager Mr. Benson had begun to lose his eyesight to Stargardt disease, a rare form of inherited macular degeneration that can begin in childhood. He nevertheless graduated from Brooklyn Friends School at 16, went to Bucknell University in Pennsylvania, graduating in 1951, and drove a series of beloved sports cars until, no longer able to see, he had to give up driving for good in his 20s.

“He said that if he had his sight back, the first thing he would do is get behind a wheel of a car,” Ms. Sunday said. “He was a gutsy guy.”

Even as his vision faded, he rode a bicycle through the Manhattan streets until that, too, became a challenge. He later hired a ski instructor to lead him down mountains in Aspen, Colo., or Davos, Switzerland. In his later years, he navigated the world with help from Nordic, his dog from Guiding Eyes for the Blind, an organization he avidly supported.

Technology, too, became a favorite tool. He became so proficient with software and smartphones that others with visual impairments would turn to him as a sort of master instructor, often visiting him at his apartment near the restaurant for lunch.

In his restaurant, however, many customers never knew that he couldn’t see them. He was a master at what is referred to in the industry as touching the table — a personal visit to make sure customers were happy. It didn’t always work.

“People think I’m a snob,” he said once in an interview. “It’s difficult because I can’t make eye contact.”

Mr. Bennett was selling office furniture when Alan Stillman, his best friend from Bucknell, suggested that he help him run his new restaurant, TGI Fridays, which had become a surprise runaway hit.

Mr. Stillman had started the restaurant in 1965 as a way, he would later say, to meet women. TGI Fridays, on the Upper East Side of Manhattan near the Queensboro Bridge, was surrounded by apartments filled with flight attendants, models and secretaries. It was a time when women still didn’t socialize much in bars.

Although he had no previous restaurant experience, Mr. Stillman timed things just right. He opened just as the birth control pill hit the market and Betty Friedan’s groundbreaking book “The Feminine Mystique” was helping to usher in the modern feminist movement. Young working professionals of both genders were hungry for a place to meet, enjoy a good hamburger and party.

TGI Friday’s may not have been the very first singles bar, but it defined the genre and its many early conventions, including ladies’ night, a velvet rope to control crowds and the bartender as a sex symbol.

The two men went on to open sequel restaurants also named for days of the week. Mr. Benson was the funny, gregarious host who knew how to manage a staff. He had no interest in the concept of franchises. Mr. Stillman was the ambitious businessman with dreams of opening similar restaurants coast to coast. (It eventually did become a family-friendly national chain.) He sold the company in 1971.

The two would pair up again six years later to invent Smith & Wollensky, a muscular steakhouse with an expensive wine list at 49th Street and Third Avenue in Manhattan. Mr. Benson came up with the name after the two found themselves stumped by what to call it. He looked at the list of their suppliers and picked two last names that, he thought, sounded good together.

It, too, would become a chain, although Mr. Benson wanted no part in the expansion. He remained a silent partner. He created his own steakhouse, Ben Benson’s, in 1982, housing it in a two-story building at 123 West 52nd Street. The location, near Broadway and the NBC and CBS studios, attracted sports and media personalities, who dined next to members of the investment crowd.

Mr. Benson liked to serve big portions from tableside trolleys and reveled in the details. “My spoon is always in the creamed spinach,” he would say. (That steakhouse staple was a particular passion of his, and critics noted favorably that he refused to add nutmeg, as many of his competitors did.)

“He was really a restaurateur in the old sense of the world,” said Ken Aretsky, the dapper former head of the 21 Club who owns Aretsky’s Patroon on East 46th Street in Manhattan. He compared Mr. Benson to once-towering names in New York hospitality industry like Sirio Maccioni, who died in April, or Elaine Kaufman.

“A place takes on the personality of the ownership,” Mr. Aretsky said. “You were there to take care of your guests. You were not a corporation. Ben represented the best of what the industry was about.”

Increases in food costs and a dwindling customer base in the wake of the 2008 recession, along with a demand for a hefty rent increase by his landlord, led Mr. Benson to close his establishment on Father’s Day in 2012.

Mr. Benson and his first wife, Wendy Benson, divorced. (She died in 1995.) In addition to his sister, his survivors include his second wife, Anna Dalva; his stepchildren Zachary and Candice Dalva and Shane Hopkins; and four step-grandchildren.

In 2012, Mr. Benson had left behind a staff that was as loyal as his customers, said Michael Hillyer, who had been a waiter there for 10 years.

“Unlike the usual jerks you end up working for in restaurants,” he said, “this guy was a class act.”