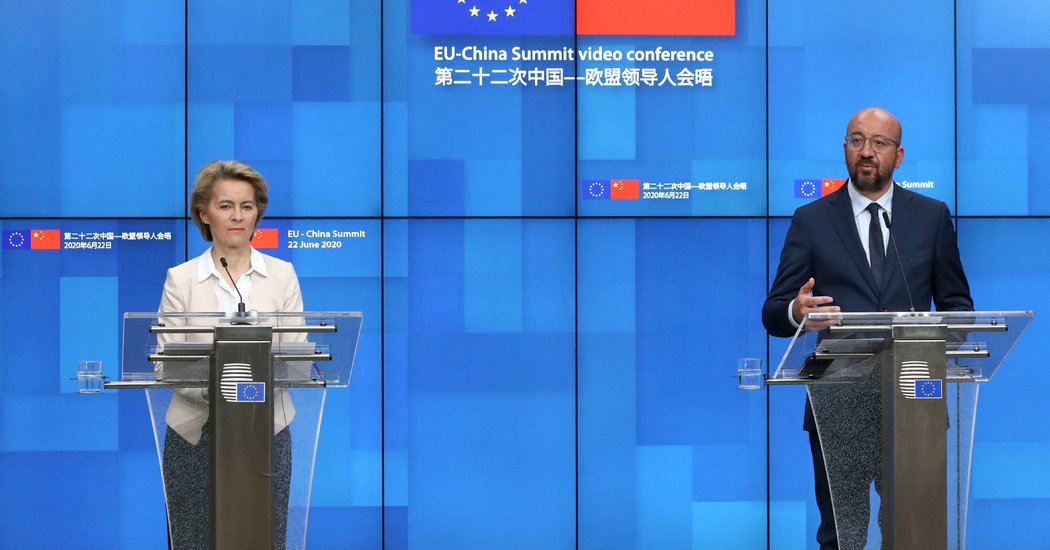 BRUSSELS — The European Union pleaded with Chinese leaders at a summit meeting Monday to put more effort into lagging negotiations on an investment and trade deal, an issue that has increasingly vexed the 27-member bloc. But the plea seemed likely to go unanswered by China, which has tightened control over its domestic economy and turned more combative in relations with Western powers.

China’s sensitivity about the source of the coronavirus, its moves against Hong Kong and its aggressive diplomacy toward European governments colored the atmosphere of the summit meeting. The videoconference setting reduced the ability to negotiate or pass quiet messages.

So the meeting, already postponed from late March, was never likely to produce a breakthrough on stymied efforts to conclude an investment treaty. While expectations were low for the talks, the first for the new European leaders, Commission President Ursula von der Leyen and Council President Charles Michel, they were still seen as frustrating.

Afterward, the two European leaders made a plea for China to put more ambition and political weight behind lagging negotiations on a host of topics and to honor previous pledges. Asking for “a higher level of attention” from Mr. Xi, Ms. von der Leyen said: “We have the intentions, the words put on paper, but we need the deeds.’’

“We continue to have an unbalanced trade and investment relationship,’’ she said, with little progress on Beijing’s commitments last year about market access. “We need to follow up on these commitments urgently and we also need to have more ambition on the Chinese side in order to conclude negotiations on an investment agreement.”

At best, European officials say, the talks could produce some more momentum from top leadership to break the impasse on issues from state subsidies and technology transfer to climate change and equal opportunities for European companies. But prospects have been made more difficult as President Xi has exercised tighter state control over the society and the economy.

The talks on Monday did not produce a joint statement, nor did the Chinese government agree to any sort of joint news conference.

The two European leaders said that they had clearly registered their concerns about China’s crackdown against the Uighurs and its proposed security law in Hong Kong. Ms. von der Leyen threatened that China risks “very negative” but unspecified consequences “if it goes forward with imposing this law.’’

But without any hint of sanctions against Beijing, such statements inevitably have no consequence. Among the bloc’s members, only Sweden has proposed European sanctions on China if it proceeds with the security law.

The apparent lack of progress makes it more likely that a Leipzig summit meeting, already postponed from September because of the virus, will be pushed into next year.

That meeting was intended to represent an achievement for Chancellor Angela Merkel of Germany before its E.U. presidency and her own long tenure ends. But German officials say the meeting must be in person and should not be scheduled until the substance of an investment deal is completed.

China, which prefers to deal with each European country individually, has always been a dilemma for Brussels. The European Union is China’s largest trading partner, and China is the second-largest for the bloc. But such interdependence also produces a kind of paralysis, with neither side particularly willing to risk that trade.

Josef Borrell Fontelles, the bloc’s foreign policy chief, said on Monday that the West had been “a little naïve” in expecting convergence from China. “Now China is more assertive and a global player,’’ he said on Monday. “It’s a partner” on issues like climate change, he said, “but also a competitor, and at the same time a rival.’’

In the past few years, Europeans have become less idealistic about China, favoring an investment screening process for member states that is voluntary but sends a message. Europe has also warned about Chinese investments in key infrastructure and potential Chinese takeovers of strategically important companies, especially now that some are weaker because of the coronavirus recession.

At the same time, the Europeans have been careful not to be seen as backing President Trump in his more aggressive position toward China, but trying to find some middle way, even if they share many of the same complaints.

“The Europeans are saying the same thing each time and expecting things to be different,’’ said Theresa Fallon, director of the Center for Russia Europe Asia Studies, a research institution in Brussels. The Chinese “having been dragging their feet on this investment deal for seven years, and they are not going to deliver,’’ she said. “Beijing is focusing on the fragmentation of Europe, courting Germany. It’s more of a managed trade world than the E.U. imagines.’’

Trade, not foreign policy, is at the heart of the relationship. But that is where the European Commission, the bloc’s executive arm, has found considerable frustration. Promises made by China last year to improve behavior and create a more “level playing field” with Europe were good, “but implementation has been lagging,’’ a senior European official said, speaking on condition of anonymity because the issue is delicate.

Technical talks on issues like unfair subsidies to state-owned enterprises; limited market access for European companies for automobiles, computers, telecommunications and biotechnology; China’s demands for one-sided technology transfers, limits on financial services and disagreements over ways to settle disputes are not making much progress, the official said.

Other disputes concern proposed changes at the World Trade Organization and China’s commitment to reducing carbon emissions. As some officials noted, Mr. Xi is proud to be a father of the Paris climate accord, but China also is building coal-fired power plants at a great rate, raising questions about its commitments — even as the country invests heavily in renewable energy.

European officials say that they have also noticed China favoring American companies after Mr. Xi and President Trump agreed on a first phase of a trade deal in January. While it is less clear that China is buying from America all that it promised — $200 billion over two years — given the virus, the Europeans noted that increased purchases of goods from one partner meant diminished purchases from Europe, despite Chinese promises that European firms would not be disadvantaged.

The two sides also discussed cooperation on combating the new coronavirus, on the Iran nuclear deal and on Afghanistan and North Korea.

In these negotiations, “Europe is always the demandeur,’’ asking for structural and behavioral change, said Ms. Fallon. “But China already has what it wants.’’