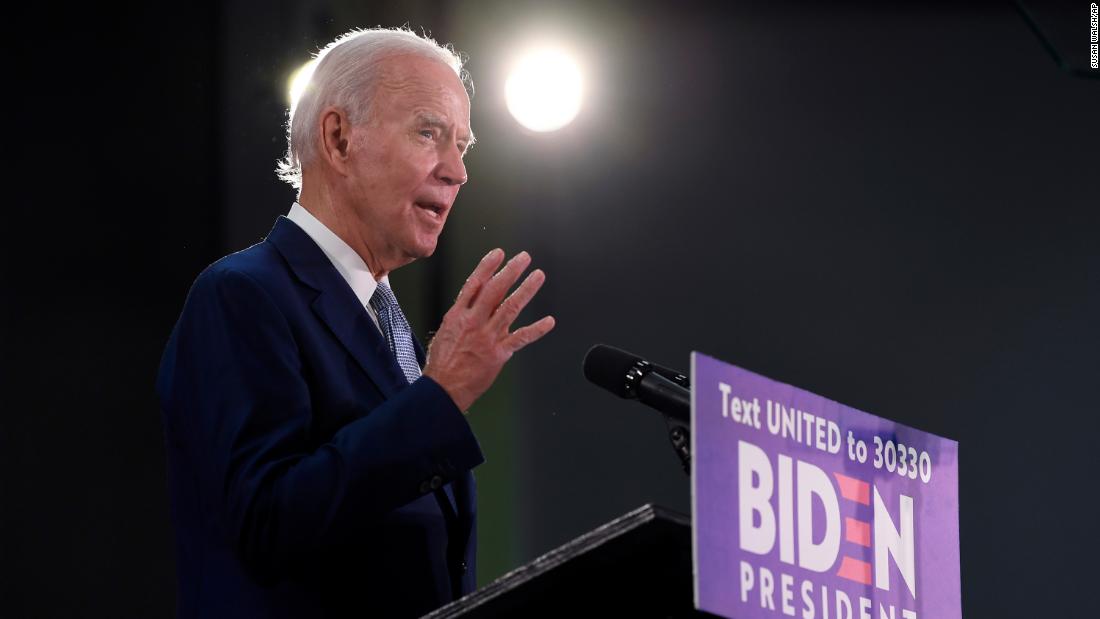 Joe Biden, the presumptive Democratic presidential nominee, has proposed lifting the corporate tax rate to 28%. That would reverse half of the cut from 35% to 21% that was enacted by President Donald Trump in late 2017.

Goldman Sachs warns that Biden’s tax plan, combined with an expected drag on GDP, would lower next year’s S&P 500 per-share earnings by $20 to $150.

“Although the coronavirus has caused the sharpest decline in economic activity on record, in some ways tax policy represents a larger risk to earnings and consequently to equity prices,” David Kostin, chief US equity strategist at Goldman Sachs, wrote in a note to clients published Friday.

A Democratic sweep in November was once thought to be unlikely. Not anymore.

Biden has a 56% chance of winning the White House, according to users on PredictIt, a prediction market that is closely watched by Wall Street. That’s up from just 43% a month ago.

Even if Trump is voted out of the White House, which is no sure thing, his tax cuts would likely stay intact unless Democrats retake the Senate, too. That was also viewed as unlikely until recently.

The chance of the Democrats controlling the Senate has climbed to 56% on PredictIt. That’s the highest level in at least 90 days and well above 40% in March 26.

Buybacks spiked after the tax cuts

The 2017 tax overhaul helped the market because it boosted corporate earnings, which drive stock prices. Moreover, it armed companies with extra cash that they used to make splashy acquisitions, invest in the future and raise dividends. The tax cuts also set off a bonanza of share buybacks, which Wall Street loves.

Although the tax overhaul was sold as a job-creator, there was no lasting boom in business spending on things like factories, software and new equipment.

“Did the lower tax regime create the amount of capital spending and job creation we thought it would? Definitely not,” said Art Hogan, chief market strategist at National Securities Corp. “But our expectations were probably misguided. And it did make our corporations more competitive in a global economy.”

Before the tax law was enacted, the US corporate tax rate of 39% was the highest among 37 developed nations in the OECD. The average was just 24%.

“The corporate tax rate probably got cut too much. We could find a more level playing field that could help paying down debt accumulated during the pandemic,” Hogan said.

The national debt is skyrocketing as the federal government rescues the US economy from the coronavirus shock. The Treasury Department expects to borrow $3 trillion in the second quarter alone — nearly six times the previous record.

Biden is also proposing to impose a minimum tax rate of 15%, a potentially costly outcome for some major companies that pay little in taxes.

For instance, in 2017 and 2018, Amazon’s financial filings show the company expected to receive money back from the federal government. And in 2019, Amazon (AMZN) said it owed more than $1 billion in federal income tax, a figure that experts said amounted to just over 1% of its profits.
“I don’t think any company — I don’t give a damn how big they are, the Lord Almighty — should absolutely be in a position where they pay no tax and make billions and billions and billions of dollars,” Biden told CNBC last month.

Markets are not freaking out

Taxes can be a powerful force for corporate earnings broadly.

Since 1990, shrinking effective tax rates have accounted for half of the S&P 500’s increased profit margin and 24% of earnings growth, Goldman Sachs said.

The companies that benefited the most from the 2017 tax cuts would be “particularly vulnerable” to new tax regime under Biden, Goldman said.

Biden’s rising election prospects have not spooked the stock market, at least not yet. The S&P 500 has surged more than 40% since March 23. And the Nasdaq is sitting at record highs.

It’s possible investors, cognizant of how big of a surprise the 2016 election was, are waiting until the outcome looks more certain.

“The market tends to be forward-pricing — except with politics. It tends to react in the last minute to politics,” said Hogan.

And the election is still nearly five months away — an eternity in the Trump era.

Wall Street may also just be betting that it can live with a Biden White House, even if tax rates go up.

“You could see a short-term hit. But don’t look at tax rates in a vacuum,” said Keith Lerner, chief market strategist at Truist/SunTrust Advisory.

Indeed, other parts of the Biden agenda could be greeted with relief from investors. For instance, Biden would be viewed as less likely to impose tariffs on trading partners than Trump, who has famously dubbed himself Tariff Man.

A Democratic sweep in November could also raise the chances of passing the elusive infrastructure package that could boost the economy.

“Thinking a Democratic administration will be anti-business is misguided,” Hogan said.