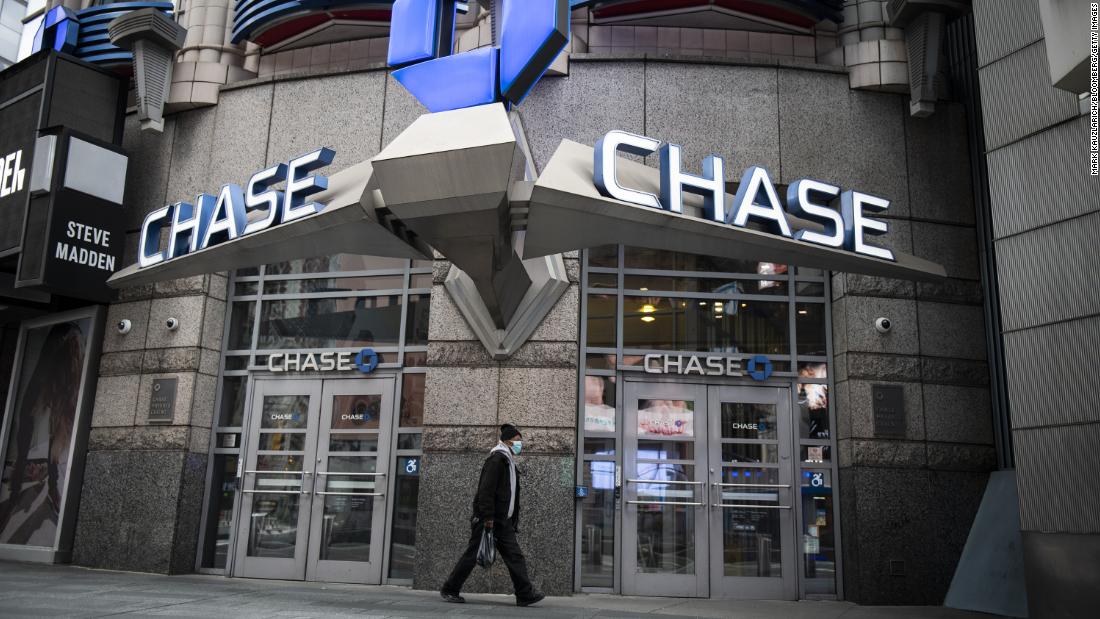 Bank of America, (BAC) JPMorgan Chase, Citigroup, Wells Fargo and US Bancorp (USB)have set aside an additional $35 billion during the first quarter to cushion against loans that go bust, according to a tally by Edward Jones.

Unlike the Great Recession, which played out over many quarters, this crisis came all at once. That required a swift response from banks.

“We believe deferrals, coupled with government stimulus for individuals and small businesses, should aid in minimizing future losses,” Paul Donofrio, chief financial officer at Bank of America, told analysts during a conference call. “Having said that, given the rise in unemployment claims, we do expect consumer losses to increase later this year and potentially into 2021.”

More reserves could be ahead

Economists at JPMorgan warn unemployment will spike to 20% and GDP will collapse by an unthinkable 40% during the second quarter.

Beyond the economic shock, the dramatic reserve builds at major US banks were driven by a new accounting standard that took effect January 1. Banks are now required to guard against potential losses during the lifetime of a loan, instead of just over the course of the next year. Naturally, that has forced banks to anticipate even higher losses, amplifying the total reserve build by a collective $11 billion.

No one knows how long parts of the US economy will remain shuttered and how strong the recovery will be once it’s reopened.

A drawn-out shutdown will force banks to build even greater reserves.

“The economy will still be in bad shape if we’re a still all sheltering in place, restaurants and fitness centers haven’t opened up and you can’t get a haircut,” said Shanahan.

Total US household debt, including mortgages, climbed to a record $14 trillion last year, exceeding the 2008 peak by $1.5 trillion, according to the New York Federal Reserve.

Banks are bracing for a wave of credit card defaults caused by skyrocketing layoffs. In the last month, 22 million Americans filed for unemployment benefits, marking the largest spike since the Labor Department started tracking this in 1967.

A rapid rise in unemployment is closely linked to credit card losses. Credit cards were already a weak spot before this crisis, marked by a steady increase in delinquencies, especially among younger borrowers in recent years.

Among the big banks, Citigroup (C) and JPMorgan have the most exposure to credit card debt, although the lenders say credit scores are higher than in the past.

Citi, for instance, told analysts that when it stress tested its current credit card portfolio against 2008 shocks, loss rates were 25% to 30% lower than what the bank experienced a decade ago.

“We feel good about the quality of our consumer credit portfolio,” Citigroup CFO Mark Mason said during a conference call.

Citi built up its reserves by $8.5 billion, giving it an allowance for loan losses of nearly $21 billion, or 2.9% of total loans.

The oil crash will cause bankruptcies

Business debt is another vulnerability, especially given the record amounts of borrowing Corporate America has done over the past dozen years.

Banks, insurance companies and asset managers surveyed by the International Association of Credit Portfolio Managers are more pessimistic about the threat of credit defaults than at any time since the Great Recession.

The Federal Reserve has rolled out a series of programs aimed at keeping credit flowing to businesses, including large ones.

The oil industry is particularly distressed because crude has collapsed to 18-year lows. At $20, dozens of high-cost US shale companies could file for bankruptcy, repeating a scenario that played out during the 2014-2016 oil crash.

Wells Fargo warned its losses on oil loans will exceed the 2014-2016 crash — even though the bank’s loan portfolio to the industry is 20% smaller today.

“We’re imagining, because of the levels of the resource price, that losses given default are substantially worse this time through,” Wells Fargo CEO Charlie Scharf told analysts.

Wells Fargo (WFC) had $14 billion in loans outstanding to the oil and gas industry as of the end of March. The bank’s first-quarter profit plunged 89%, driven largely by a $3.1 billion reserve build.

‘You can’t model this out’

Small businesses have also been hit hard by the crisis.

The $2 trillion stimulus package enacted by Congress and the White House also allocated nearly $350 billion for forgivable small business loans. Launched on April 3, the Paycheck Protection Program is already depleted and lawmakers are divided over how to replenish it. A deal to add another $250 billion is likely, though the timing is unclear.

Yet economists have warned that some small businesses will nonetheless succumb to bankruptcy, especially ones that lack the resources needed to access emergency loans. Others, including some restaurants, could struggle to attract customers even once the economy reopens.

“You worry about the ability to restart and which small businesses can function after being locked down,” said David Konrad, senior research analyst at D.A. Davidson. “You can’t model this out on history.”

Do banks have enough cash to weather the storm?

The banking industry entered this crisis in far better shape than the last one because it has been forced to bulk up on loss-absorbing capital. That enabled the big banks to post profits during the first quarter despite the reserve builds.

Still, the risk of a prolonged downturn is putting pressure on big banks to suspend their dividend payments.

Minneapolis Fed President Neel Kashkari is urging US banks to go a step further by raising $200 billion in private capital.

“Unlike the rest of us, banks have the ability to essentially vaccinate themselves against this crisis,” Kashkari wrote in the Financial Times on Thursday. “They should do so now.”