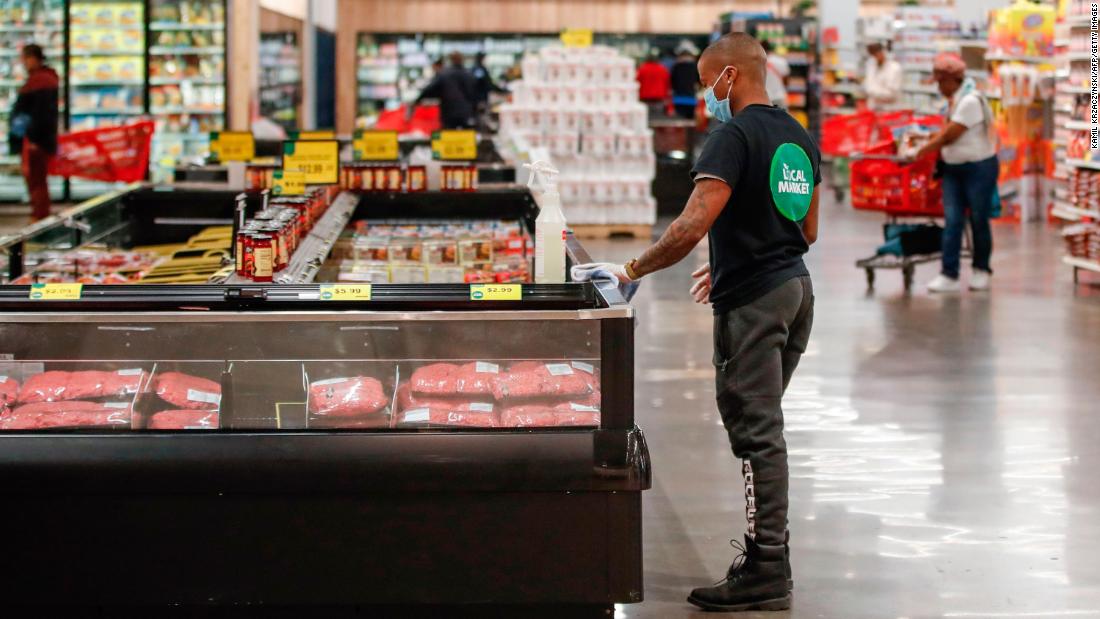 “I’m up front and center with a lot of customers,” said Pam Hill, a cashier at Albertsons in Los Angeles and a member of the United Food and Commercial Workers union. “It’s nervous times for us.”

When the virus first started spreading, some customers and workers at Hill’s store didn’t take it seriously because of a debunked myth that black people couldn’t get coronavirus. That quickly changed after two workers at her store tested positive for coronavirus.

“We were being misinformed to think it doesn’t affect us,” she said. “And it does — greatly.”

Retail and grocery stores are some of the few public spaces still open, and they are disproportionately staffed by black workers.

“Black workers are putting their lives and health on the line to provide goods and services that matter to our society,” McKinsey said in a report Tuesday.
Black workers make up 11.9% of the American workforce, according to the Center for Economic Policy Research, a left-leaning think tank. But they make up a higher share of “essential” workers on the frontlines during the pandemic.

In the grocery, drug and convenience store industries, 14.2% of workers are black. In the trucking, warehouse and postal service industry, 18.2% of workers black.

Black workers also make up a higher portion of the workforce at some big chains like Walmart and Amazon. At Amazon (AMZN), 26.5% of workers are black. In 2018, at Walmart (WMT), the largest private employer in the United States, 21% of workers were black.

“Blacks and Latinos are disproportionately in low-wage jobs. And amongst those are retail,” said Steven Pitts, associate chair of the Center for Labor Research and Education at the University of California, Berkeley. “To the extent that that you want workers to shelter in place, the capacity to shelter in place is racially shaped.”

The federal government has not tracked coronavirus by demographic groups, but racial disparities have been evident in early data on coronavirus deaths from Louisiana, Illinois, New York, Michigan and New Jersey.
In Chicago, 72% of the city’s deaths have been among blacks, who make up just 30% of the city’s population. In Michigan, black Americans represent 41% of deaths, despite making up 14% of the state population.

And in New York City, black people represented 28% of the deaths, higher than their 22% representation in the city’s population.

Several black grocery store workers have died from the coronavirus, including Phillip Thomas, 48, who was an employee at Walmart in Evergreen Park, Illinois, for nine years.

“He left work because he got sick. He was a diabetic,” said his sister Angela McMiller.

Additionally, coronavirus spreads faster in locations with higher population density, such as cities. Black Americans are more likely to live in urban counties than suburban or rural ones, according to a Pew analysis.

“We’re seeing the legacies of the immediate past and the historical past,” said Pitts. “You don’t have a racist virus. But you’re landing into arenas of American life that are heavily racialized. And that’s why you see the disparate impacts.”

Although retailers, including Albertsons, Walmart and Target, have increased pay during the pandemic, expanded their benefits and increased safety measures, some of their black workers say it’s not worth the risk.

One black Target (TGT) worker in Pikesville, Maryland, who spoke under the condition of anonymity and is a member of the advocacy group Target Workers Unite, said she’s taking a leave of absence from work because she has hypertension and her husband has asthma.

“I have underlying conditions,” she said. “It’s too dangerous.”