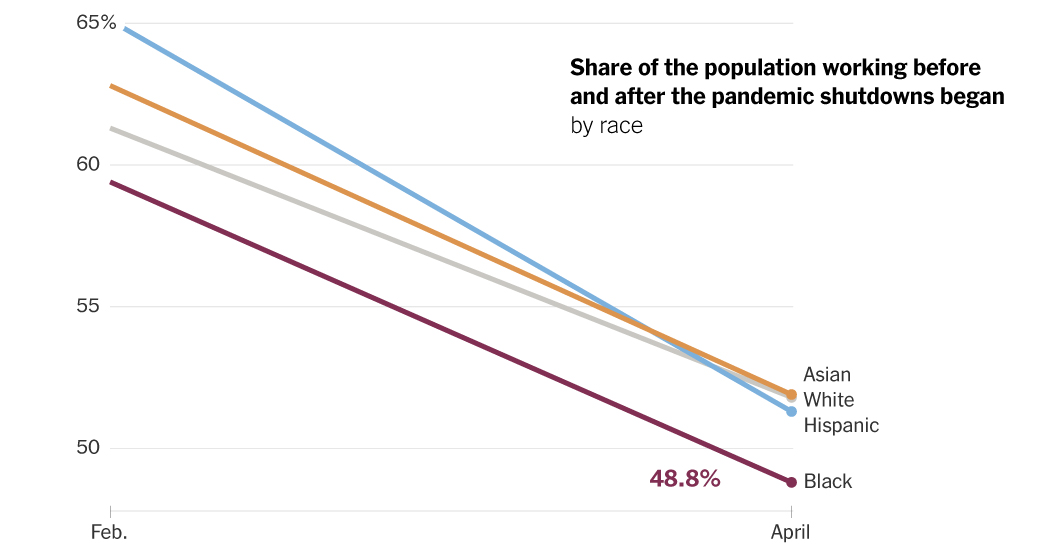 Black employment rates are plummeting, and the evolving wealth and income hit could fall on the shoulders of those ill-equipped to bear it.

WASHINGTON — The coronavirus recession has hit black Americans particularly hard, amplifying racial inequalities that may worsen as the economy begins what is expected to be a slow climb back to where it was before the crisis.

Black Americans have been slightly more likely to lose jobs or income in the recession that took root as states locked down their economies. They are more worried about the financial toll from the virus than white Americans and have far fewer resources available to ride it out, given that they earn less money and have had less ability to build wealth. And they are dying at higher rates from the virus than whites.

Unemployment rates for black workers had dipped to an all-time low just before the pandemic, a piece of good news that the Federal Reserve had latched onto as a sign that a strong economy was generating broadly shared gains. The pandemic has swiftly ended that era.

As the prospects for a rapid recovery dwindle and Americans face what could be a prolonged stretch of high unemployment and suppressed income growth, black households are confronting the prospect of a widening economic chasm.

Workers across racial and ethnic groups have seen unemployment shoot higher amid state and local lockdowns in the pandemic, but many black workers fall into two fraught categories: They are either essential workers on the front lines, exposed to the virus, or they have lost their jobs. Black workers make up 11.9 percent of all employees but 17 percent of front-line workers, one study found.

“We need to recognize that unless we are OK with black and brown families always bearing the burden of these sorts of things, we need to address the underlying disparities,” said Valerie Wilson, an economist at the left-leaning Economic Policy Institute.

A series of charts illustrates the challenges facing black workers, including how wage disparities bleed into wealth disparities and why they entered the recession in such a fragile state.

The jobless rate — the share of adults actively applying for jobs — is historically about twice as high for black people as for white people amid even the best economic conditions.

Many factors contribute to that divide, including racial discrimination and access to educational opportunities. Studies have consistently found evidence of discrimination against black job applicants. Companies are more likely to call back candidates with white-sounding names on their résumés, for instance. Black workers have lower education rates, a fact that is itself the outgrowth of long-running opportunity disparities, and people with less schooling are less likely to be employed.

While job losses tied to the economic shutdown have spared no racial or ethnic group, there are reasons to worry that black and other minority workers could suffer disproportionately as companies call back some — but not all — furloughed employees.

Less Than Half of Black Adults Now Have a Job

Black workers suffer from what some economists call a “first fired, last hired” phenomenon: They lose work early, and their unemployment rate continues to rise even as the labor market for white workers begins to heal. That can have lasting effects, because workers who get stuck on the labor market’s sidelines can see their skills become outdated, making it harder for them to get back into decently paying jobs.

“Based on prior experience, I would expect that we won’t see the recovery look as even as the job losses have been,” Ms. Wilson said, explaining that while much of America has been furloughed, minority job losses may be more likely to turn permanent.

Black workers consistently earn less than white workers. That is partly because they are more heavily concentrated in jobs in low-paying service industries. But it is also true that black Americans earn less at every education level than comparable whites, and that black workers continue to be underrepresented in corporate board rooms and the highest-paying occupations in the country, including surgeons, dentists and computer and information systems managers.

Federal Reserve Bank of San Francisco research has found that the pay gap between black and white workers is increasingly the result of biases that are tough to capture in data.

“Factors that are harder to measure — such as discrimination, differences in school quality or differences in career opportunities — are likely to be playing a role,” Mary C. Daly, the president of the San Francisco Fed, and her co-authors wrote in a 2017 analysis.

In part because they make less, black workers accumulate less wealth over time. The end result is that they have less money in their bank accounts to make it through extended economic weakness, as the United States could face in recovering from the pandemic. The typical black household has one-tenth the wealth of a typical white household, according to Federal Reserve data.

The last several decades have done relatively little to deliver wealth gains to black workers. In 1983, according to calculations by the New York University economist Edward N. Wolff, the median black household had a net worth that was the equivalent to about three months of its income — which is to say, if a black household sold everything it owned, it could replace its income for three months. In 2016, median black net worth was equal to about six months of median black income.

Over the same time period, the median white household saw its wealth rise from about two years’ worth of income to about three years’ worth.

As a result, black households were about twice as likely as white households to say they would have trouble covering their bills if hit by an unexpected $400 expense in 2019, a recent Fed survey found.

As part of their lower wealth share, black families are far less likely to own their homes. (And the homes they do own are often worth less, because of discrimination, than comparable homes in similar white neighborhoods.)

While the 2007 to 2009 downturn was painful for families who saw their housing values drop, leaving them underwater on mortgages, this period of weakness might disproportionately hit renters. The group was already grappling with low affordability, and could be at risk of falling behind on payments should expanded unemployment benefits and a one-time stimulus payment run out before jobs, hours and wages snap back.

Black Americans Have the Lowest Home Ownership of Any Group

The government’s one-time $1,200 checks for qualifying households and $600 in additional weekly unemployment benefits have either supplemented or more than made up for missing wages for many American households. But the supplement to state unemployment payments is set to expire July 31, and many economists warn that the financial Band-Aid will be insufficient to get workers through a slow slog back to fuller employment.

Even the nonpartisan Congressional Budget Office expects the weak labor market to last for years.

The concern is that the shadow of the pandemic will be more economically damaging for the same workers who are least able to handle that financial stress — and often, those people are black or from other minority groups.

“Unemployment has tended to go up much faster for minorities, and for others who tend to be at the low end of the income spectrum,” Jerome H. Powell, the Fed chair, said at a news conference in late April. “Everyone is suffering here. But I think those who are least able to bear it are the ones who are losing their jobs, and losing their incomes and have little cushion to protect them in times like that.”