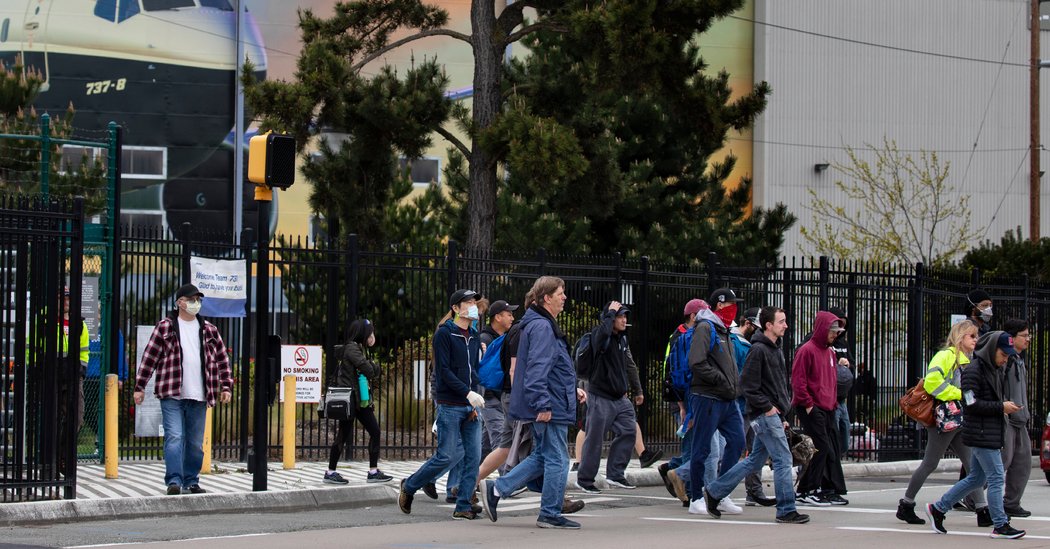 The breathtaking slowdown in global aviation is taking a huge toll on Boeing, which said on Wednesday that it would slash about 16,000 jobs after reporting that revenue tumbled by 26 percent in the first three months of the year.

“The global pandemic has changed the way we live and work,” said Boeing’s chief executive, David L. Calhoun, in a note to staff. “It is changing our industry. We are facing utterly unexpected challenges.”

Airlines around the world are trying to stay alive, with losses expected to total more than $300 billion by year’s end, according to an industry trade group. As a result, many carriers are delaying purchases, deliveries and maintenance.

Boeing said it was slowing aircraft production, including for the troubled 737 Max, the 787, 777 and 777x. The company is also exploring ways to raise more capital, either from the federal government or financial markets. The job cuts, about 10 percent of Boeing’s staff, will be even steeper for those employed in the divisions most exposed to the downturn, the commercial airplanes and services businesses. Those units will see staff cuts of about 15 percent.

“I know this news is a blow during an already challenging time,” Mr. Calhoun said in the note. “I regret the impact this will have on many of you. I sincerely wish there were some other way.”

Boeing reported a net loss of $641 million in the first quarter, compared to $2.1 billion profit a year earlier.

The company has said that it does not expect air travel to recover to levels reached before the pandemic for three years and that it would likely take several years more for travel to return to its previous long-term growth rate.

Boeing’s commercial aircraft business was especially hard hit in the first quarter by the grounding of the Max and the pandemic, with revenues for that business down nearly 50 percent to $6.2 billion in the first quarter compared to the same period last year. Total revenue dropped to $16.9 billion. The company received just 49 new orders and had 196 cancellations between January and March.

On Tuesday, Southwest Airlines said it has been negotiating a reduction in the number of 737 Max jets it will accept this year. Southwest said it would now receive no more than 48 Max jets by the end of 2021, instead of the 107 it had previously expected to take.

Boeing said it hopes to reach its job cut targets through voluntary means, including buyouts and early retirement offers. Employees who take the buyout will receive three months of health care and one week of pay for every year they have worked at Boeing, up to 26 years, the company told workers last week. Employees have until Monday to signal their interest in buyouts. If approved, they would leave in early June.

Any cuts are likely to be disproportionately focused on Boeing’s facilities in Washington State and South Carolina, home to its three major commercial aircraft manufacturing facilities. A weekslong shutdown of operations at those facilities disrupted production of passenger planes, but also affected Boeing’s defense and space business.

While Boeing itself is struggling to manage the effect of the pandemic, the company this week also expressed concern for the health of its suppliers, who receive about 70 percent of the company’s revenues.

“Currently, our team is focused on the best ways to keep liquidity flowing through our industry and to our supply chain until our customers are buying airplanes and related services again,” Mr. Calhoun told shareholders on Monday.

To that end, the company has taken out a loan, cut costs and suspended dividend payments and stock buybacks, he said. Boeing has $15.5 billion in cash on hand, but plans to raise more capital soon. In an interview on CNBC on Wednesday, Mr. Calhoun did not specify whether some of that would be in the form of federal aid.

On Wednesday, Boeing also said that it had suffered more than $2 billion in one-off costs in the first quarter.

A slower than expected ramp up in production of the 737 Max, which was grounded last year after two fatal crashes, subtracted about $1 billion from its bottom line. And the company incurred a pretax charge of $827 million for the KC-46A Tanker, most of it stemming from repairs Boeing agreed to make this month following discussions with the U.S. Air Force.

The company took a $336 million charge for repairs on the 737 Next Generation aircraft and the four-week suspension of work at Boeing’s facilities in Washington State cost the company about $137 million.

Over the weekend, Boeing also announced that it was terminating its $4.2 billion deal to buy an 80 percent stake of Embraer’s commercial jet business. Embraer is contesting that move and said Monday it had begun arbitration proceedings.