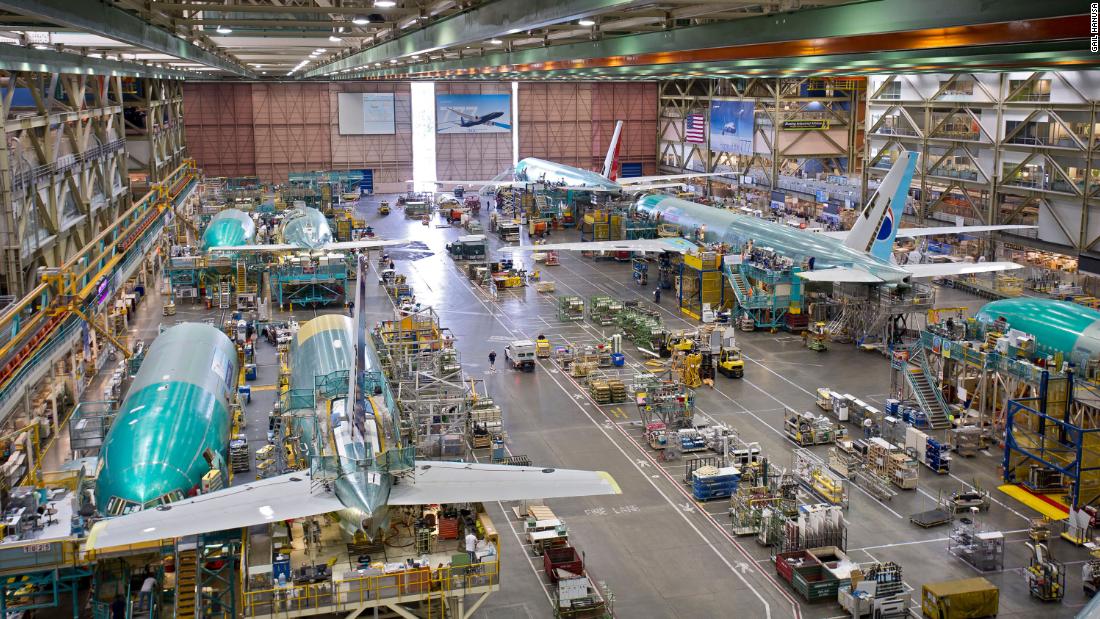 “If you’re an airline today, your last focus these days is buying airplanes, your primary focus is survival,” said Ron Epstein, aerospace analyst with Bank of America Merrill Lynch.

News that Boeing plans to resume production helped lift its shares 14% Friday. But it doesn’t change the fact that so far this year Boeing has had four times as many orders for new jets canceled — 196 — as it has booked new orders. Another 160 orders have been deferred and are no longer counted in its backlog of orders.
And while most of the canceled planes are Boeing’s troubled 737 Max, which has been grounded since March 2019 following two fatal crashes that killed 346 people, the problem is much broader than that safety issue. It’s the fact that airlines aren’t going to need new planes for the foreseeable future.

Of the worldwide fleet of 26,000 passenger jets, nearly 17,000, or 64%, are now parked at airports around the globe, according to tracking service Cirium.

“Nobody is flying,” said Epstein. “The longer this goes on, the chances rise that the airlines don’t need to buy airplanes.”

In the face of health concerns, travel restrictions and stay-at-home orders put in place due to the coronavirus outbreak, demand for air travel is “essentially zero” according to a statement this week from United Airlines. It cut its May schedule by 90%, and warned that demand for travel is likely to stay depressed in 2021. Other airlines are making similar cuts and issuing similar warnings.
Boeing (BA) rival Airbus (EADSF) announced last week that it was able to deliver only 122 of the 182 jets it built in the quarter, reflecting “customer requests to defer deliveries, as well as other factors related to the ongoing COVID-19 pandemic.” It also cut its future production plans by about 30%.

Boeing has yet to say at what pace it will build planes when it resumes production next week, but experts expect cuts in production rates there as well.

Deliveries will be much lower

Epstein and other experts say they don’t expect deliveries to drop to zero, even if they’re sharply curtailed by the current crisis. The airlines have already arranged financing for many of the planes close to delivery. And the newer planes are more efficient to operate than the older ones, although with fuel prices sharply lower, that advantage is diminished.

“You buy a plane for 15 to 20 years, not for over the next six months,” said Chris Denicolo, credit analyst with Standard & Poors.

The good news for Boeing and Airbus is that both have huge backlogs of orders. Boeing had 5,400 orders on backlog as of the end of March and Airbus about 7,500. Even if each has order cancellations equal to a quarter of that backlog, they’ll have enough plane orders to keep building for several years, when the demand for travel and planes is expected to have recovered.

“Most industries would kill to have orders for the next five to six years,” said Denicolo.

Still, industrywide deliveries are likely to be down 50% to 60% this year, according to an estimate from Laurent Rouaud, co-founder of aviation consultant Avwork Partners. Boeing’s and Airbus’s combined deliveries were already down 22% in 2019 due to the 737 Max crisis. A drop of an additional 600 jets would cut sharply into both companies’ cash flow as they earn most of their revenue when an airline takes delivery of a jet.

Why Boeing is going to restart building jets

So why exactly is Boeing building jets again? Mainly, to help support its suppliers, many of whom have been badly damaged by Boeing’s problems with the 737 Max, which temporarily stopped production in January. As workers start building other plane models again next week, a separate team will prepare to resume production of the 737 Max, although Boeing doesn’t expect approval from aviation regulators around the world for it to fly again until the middle of this year.

“I think part of it is trying to keep the supply chain healthy,” said Denicolo. “The longer this goes on, the smaller suppliers, the ones you and I haven’t heard of, could go out of business, and that could cause bigger problems going forward. That could delay production restart.”

“For every dollar Boeing spends, approximately 70 cents goes directly to our suppliers,” he said to employees Thursday as he announced the resumption of work. “Our team continues to focus on the best ways to keep liquidity flowing through our business and to our supply chain until our customers are buying airplanes again. We continue to believe strongly in the future of aviation and of Boeing as the industry leader and are willing to borrow against that future.”

But while Boeing is doing what it can to help suppliers by resuming production, it’s simultaneously preparing for lean years ahead.

The company is offering buyouts and enhanced pension benefits as a way of cutting staff voluntarily before moving to involuntary job cuts.

The company had about 161,000 employees at the start of 2020 two-thirds of whom work in the commercial airplane division. Epstein estimates that 20% to 25% of those jobs are at risk.

“We’re in uncharted waters,” Calhoun told his Boeing employees Thursday. “The impact of this global virus will change our business for years to come.”