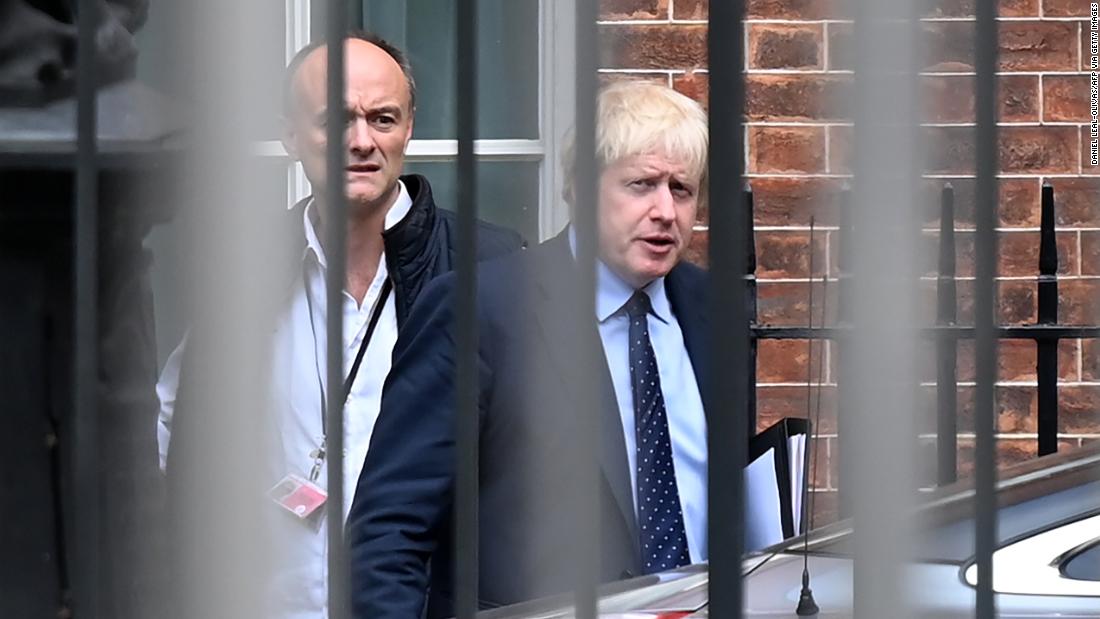 The conservative Daily Mail and the liberal Guardian both said Monday Johnson’s senior adviser Dominic Cummings had to go after he was accused over the weekend of breaking the lockdown rules he helped craft at least twice.

The Guardian and the Daily Mirror reported Friday that when Cummings’ wife was ill with coronavirus in late March they drove more than 250 miles so that they could isolate themselves in a second home closer to family. Cummings said they made the trip so they could have help caring for their child, in case they both fell ill.

Just a day later, the same papers reported new allegations that Cummings had been seen away from London on two further occasions after his initial trip. Downing Street has rebutted the subsequent claims, saying in a statement that it would not waste its time “answering a stream of false allegations about Mr. Cummings from campaigning newspapers.”

At the time, government advice was for people to stay in isolation at their primary residency, particularly if they were ill.

Criticism of Cummings, and of the defense of his actions by the government, has been raining down ever since. Lawmakers from Johnson’s own Conservative Party say Cummings made it seem as though there was one set of rules for the political elite and another for everyone else. Many people chose to stay at home and not seek help from extended family members because they believed that’s what government directives required.

Johnson and Cummings have been defiant. In a Sunday evening press conference, Johnson said he believed Cummings acted as any father would, “responsibly, legally and with integrity.”

The Guardian splashed on its front page on Monday that there was “no apology, no explanation.”

“Ever get the feeling you’ve been cheated? It emerges the rules are optional for the prime minister’s friends,” said the lead editorial, teased on the front page next to a photo of a smiling Cummings in front of Johnson’s office at Number 10, Downing Street.

The Daily Mail went even further, asking in giant lettering on the front page “What planet are they on?” atop a blistering editorial.

“Neither man has displayed a scintilla of contrition for this breach of trust. Do they think we are fools?,” the editorial states. “For the good of the Government and the nation, Mr. Cummings must resign. Or the Prime Minister must sack him. No ifs, no buts.”

Cummings is the most influential and senior aide to Johnson in Downing Street. He’s credited as the mastermind of the “Vote Leave” campaign in the 2016 Brexit referendum — a vote that ultimately propelled Johnson to the top job. But he’s also been blamed for political missteps such as Johnson’s decision to suspend parliament for five weeks shortly before Britain’s exit from the European Union, a move the UK Supreme Court ruled was illegal.

The latest controversy comes as the government continues to urge the public to adhere to lockdown measures to stop the spread of the virus, a message and effort that has now been muddled, critics say.

One of the government’s own scientific advisers, Professor Stephen Reicher, tweeted that by not punishing Cummings, “Johnson has trashed all the advice we have given on how to build trust and secure adherence to the measures necessary to control COVID-19.”
Some conservative leaning papers, like Johnson’s former employer the Telegraph, were gentler on the prime minister on Monday, focusing instead of his defense. Still, the Telegraph hosted columns calling the incident “Domnishambles,” and warning Johnson was putting his political capital at risk for a “career psychopath.”
Among the few papers Johnson can rely on for fully support are the Rupert Murdoch-owned titles. The Sun highlighted Johnson “defies calls” to fire Cummings, saying he’s “Backed to School,” a play on Johnson’s plans to start reopening schools next week.
The Times meanwhile highlighted Johnson’s statement that Cummings “acted like any father” alongside a political column mocking how the political “mob scented blood.”

— Rob Picheta contributed to this report.