Boxed Lunches and Plexiglass Will Welcome Back Wall Street’s Workers 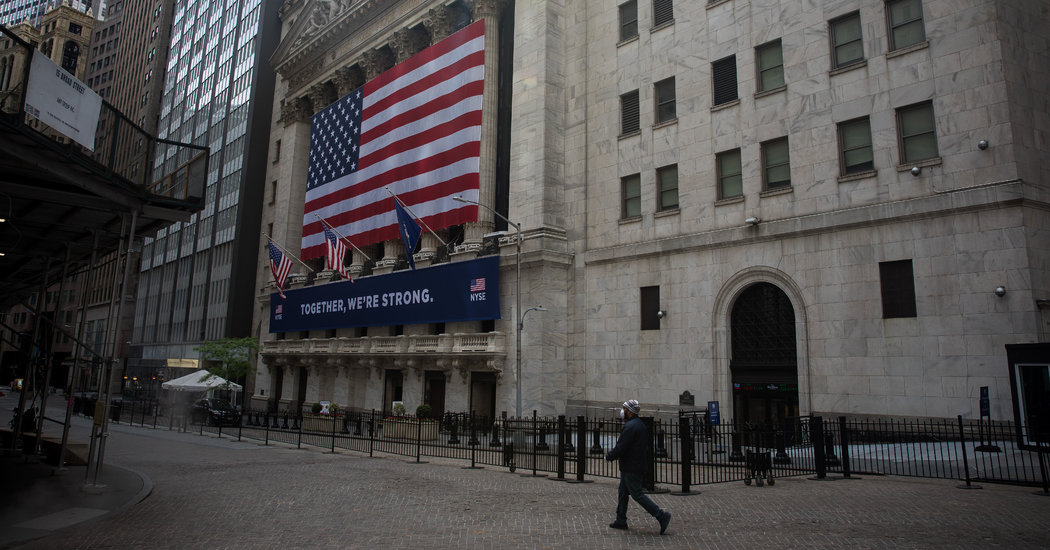 Grab-and-go packaged meals may replace midday generous buffets and three-figure lunches. Plexiglass could divvy up trading floors the size of football fields. Heat maps, accessible on a mobile app, will help identify the restrooms with the smallest crowds.

But when Wall Street reopens its doors to employees, the talent will only trickle in.

New York is starting to ease restrictions on businesses, and the world’s biggest financial firms are preparing to bring thousands of employees back to their offices starting this month. But even with sophisticated face-mask sensors in the lobby, temperature checks and touch-free elevator rides, it will be well into next year before most workers are back at their desks and the center of global finance begins to feel like its old self again.

“We’ve really underscored to people that returning to the office will be different from what they’ve left,” said Andrew Komaroff, chief operating officer of the asset management firm Neuberger Berman, where about 150 of the firm’s 1,400 workers will return to the office in the coming weeks. “It’s not going back to where we were at the end of February.”

Even as Wall Street has evolved away from frantic traders clutching bits of paper, it has maintained its raucous energy. Hoards of workers stream from packed subway trains and ferry terminals each morning to shout and cajole their way through complex transactions with big money on the line. But the post-virus financial industry is likely to lose some of its thrum, not only because of its trickle of return employees but the added inconveniences they’ll face.

At Goldman Sachs, which is expected to bring back a first wave of employees later this month to its downtown Manhattan headquarters, workers with a body temperature of more than 100.4 degrees will not be allowed to work from the office. At Citigroup, which plans to bring back a small cohort as early as July, workers will be required to stand six feet apart while waiting for the elevator. And at the Midtown offices of Neuberger Berman, conference room seats have been removed and additional hand sanitizer dispensers have been plastered to walls and entryways.

“There’s a high degree of anxiety, as you can imagine,” said Scott Rechler, chief executive of the real estate company RXR Realty, which counts UBS, Bank of America, and other financial services firms in New York as tenants. To help reorient employees on their return to the office, Mr. Rechler’s firm has established an app to coordinate workdays and arrival times with its tenants to minimize social contact. It has also shot videos of planned arrival procedures, including temperature scans and Bluetooth-powered elevator programming, to help workers understand what to expect. “Officing is going to be different than it was before.”

Neuberger Berman’s Mr. Komaroff and executives at other large financial firms say the first wave of returning workers will be small and composed primarily of those who cannot do their jobs at home easily. There are many: stock and bond traders accustomed to tracking fast-moving markets on multiple screens, bankers working on complex bond underwriting deals that require interacting with hundreds of investors, and treasury workers who oversee their firms’ own financing by managing a complex network of creditors, bonds and other cash sources.

There may also be some employees whose jobs do not demand the office environment, but who are feeling pent-up or distracted at home.

Firms including Citi and Goldman Sachs say the refilling of office desks is voluntary and cuts across seniority levels. Employees who feel uncomfortable coming in, the firms said, will have the option to decline without consequences. (That has not uniformly been the case. Some traders at Bank of America have said that they felt pressured to be in the office throughout the pandemic, even as colleagues on their Midtown trading floor were stricken with Covid-19.)

But as the virus’s death toll climbs in the United States — even as it recedes in New York — many of Wall Street’s workers are likely to avoid the office for months to come.

The city’s biggest banks and investment firms typically house 350,000 workers in New York, according to the Partnership for New York City, a nonprofit group that works with businesses to stoke the city’s economy. In a recent partnership poll, respondents from dozens of companies — more than a third of which were in the financial sector — predicted that just 10 percent of their employees would return to city offices by Aug. 15. A mere 29 percent would return by Dec. 31.

It will be a “very gradual return,” said Kathryn Wylde, the group’s president and chief executive. “There’s a sense that a significant portion of workers will continue to work remotely.”

The well-compensated work force of Wall Street, accustomed to Hamptons beach houses and spacious home offices, have an easier time working from home than employees in less affluent industries. But if distance working continues over the long term, traders, analysts and money managers think that management and employee development — recruiting, hiring, training and mentoring — is likely to suffer. Seasoned employees say they know how to navigate their firms’ cultures and systems, but worry for junior colleagues just coming on board.

The problems and preparations are complex.

One of the biggest concerns is just getting to the office. The virus is far from eliminated, and it can spread easily in the close quarters of mass transit. The Centers for Disease Control and Prevention has suggested that companies pay employees’ parking costs to encourage them to avoid buses and commuter trains. Employees at Bank of America and Morgan Stanley say they have been offering some employees a workaround: reimbursement for private transportation, like Uber. And Citi has been exploring the possibility of renting office space in suburbs on Long Island and in Westchester County to better accommodate employees who live in those areas.

Once workers are at the office, firms will be trying to space people out in cafeterias, elevators and cubicle zones. Restrooms will pose a particular challenge, especially on trading floors where hundreds of people work shoulder to shoulder. To mitigate the problem, RXR Realty’s new tenant app will allow workers to view heat maps of restrooms to avoid those with higher traffic where social distancing could prove difficult. Workstations will also be tagged with QR codes that employees can scan if they want to request a deep cleaning.

Most banks and investment firms say that many different safety measures are under review, and that the details of their new office protocols have not been finalized. But many will no doubt require six-foot buffer zones at the elevator banks. Some firms will mandate that masks be worn in all common areas.

The logistical headaches and continued safety concerns have some companies thinking it’s just not worth hurrying. In some cases, firms are postponing reopening at least until September, and maybe even further. The private equity firm TPG expects to keep employees based in New York, San Francisco and London at home until after Labor Day. The hedge fund Point72 has decided to keep its New York and Stamford, Conn., offices essentially closed until further notice, as is the fund’s satellite office near the beach in East Hampton. The private equity firm Carlyle Group, based in Washington but with a large office in Midtown, is also on a post-Labor Day timetable, and the Boston-based private equity firm Bain Capital has not yet set a return date for its offices in the United States or in London.

For some workers, there’s no rush. As in many other industries, meetings have moved to Zoom and other video platforms. And banking executives say that because of reductions in travel — both daily commutes and trips to client meetings that could be halfway around the world — they are able to connect virtually with a wider network, sometimes holding a meeting every hour, on the hour. Some say they appreciate the extra time to catch up on emails and other administrative work.

“I was definitely concerned about the workability of working from home,” said Jen Roth, who runs Goldman Sachs’s currencies and emerging markets business in the United States. “I have been shockingly surprised.”