Brexit is back to rattle UK markets 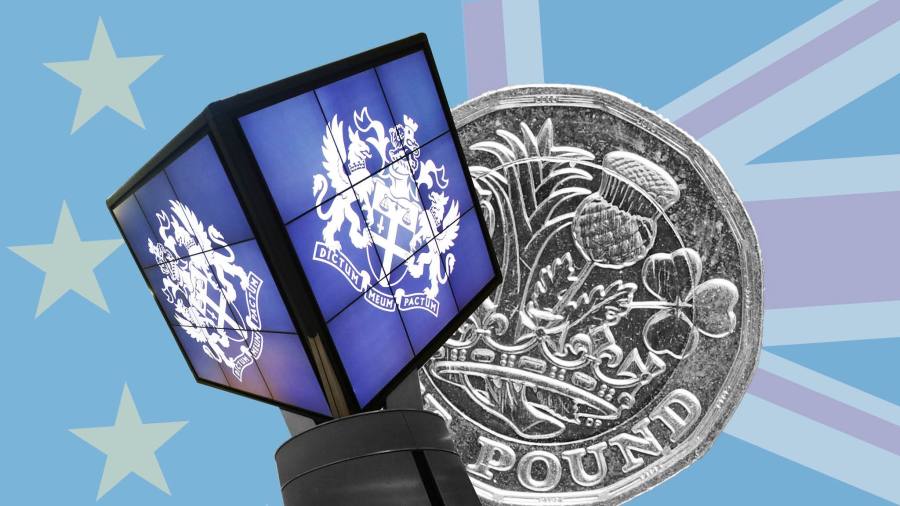 Having navigated the economic storms inflicted by coronavirus, UK markets are heading for fresh stress over Brexit, warn analysts.

The UK has formally left the EU but the terms of its new trading arrangements with the bloc have yet to be fixed, and time is running short to agree a deal before transition arrangements expire in December.

So far, negotiations between the two sides have progressed in fits and starts, but the Covid-19 crisis has largely prevented this from damaging sterling or UK stocks. However, analysts are warning that this could change, reversing recent momentum in both equities and the pound.

“Stay alert. Keep distance,” Goldman Sachs analysts said late last month. “We expect Brexit concerns to continue to weigh on sterling in the weeks ahead,” the bank said, adding that the prospects for UK-focused stocks were not good.

Like all major stock markets, the FTSE 100 suffered a heavy blow in late February and most of March, when the worsening pandemic prompted a rethink on global growth. The benchmark dropped by a third in those turbulent weeks and still sits about 17 per cent below where it started the year. The more domestic-focused FTSE 250 has fared slightly worse, down almost a fifth for the year so far.

In contrast, the US benchmark S&P 500 index has fallen just 5 per cent so far this year, while Europe’s Euro Stoxx 600 has declined 13 per cent.

Growing trade tensions with the EU will only add to the “wall of worries” for UK stocks, according to Kasper Elmgreen, head of equities at Amundi.

Trade negotiations between London and Brussels entered their third and final session this week. The UK has ruled out an extension to the current standstill transition period.

If the two sides cannot make any progress this week or at a crucial summit later this month, analysts expect sterling to be hit. The effects will worsen, they say, as the months count down.

“Sterling will get it on all sides,” said Jane Foley, head of FX strategy at Rabobank, adding that the currency would suffer from the combined political, economic and social crosswinds caused by Covid-19 and Brexit. “We’re looking at the possibility of an even more drawn-out recession if investors decide investing in the UK isn’t worth it.”

If there is no breakthrough by the end of this month, investors should price in a 50:50 chance of a trade deal by the end of the year, according to analysts at JPMorgan. That should expose the pound to a “fraught few months”, the analysts say.

Sterling has not recovered from huge losses in 2016, when it dropped almost 20 per cent in the three months following the referendum on EU membership. Like most other G10 currencies, the pound has rallied this month, pushing past $1.25 as the dollar has softened. But it is still down 5 per cent against the greenback so far this year. By contrast, the euro is down just 0.4 per cent.

Brexit is not its only problem, say investors. The UK is struggling to rebound from the effects of the viral outbreak, which has left it with one of the highest death rates in Europe and has made its economic reopening fraught with danger. Meanwhile, ultra-low interest rates — and even talk of negative rates — have pushed the currency lower.

“Whatever kind of Brexit you have, over whatever period, you can’t get to anywhere near the same magnitude of impact on the economy as coronavirus,” said Paul Dales, chief UK economist at Capital Economics.

Against this backdrop, several banks have recently downgraded their sterling forecasts. In mid-May JPMorgan downgraded its end-of-year forecast for the pound to $1.20, from $1.23 previously. HSBC also revised its forecast for the same period down to $1.20 from $1.35.

On the stock market, the utilities, consumer discretionary and industrial segments have been worst off since the referendum. Analysts are expecting further strains for stocks focused on the UK economy over the coming months, if Brexit sends the pound lower.

Value can be found among the wreckage, say analysts, but mostly in sectors less exposed to volatility in exchange rates. “From our perspective, it’s an attractive hunting ground,” said Amundi’s Mr Elmgreen.

Against this negative backdrop, progress towards a UK-EU trade deal could bring speedy “relief” to UK capital markets, said Ms Foley. “There’s a lot of weariness,” she said.

But others are more pessimistic. Some investors even think the government could use the cover of the Covid-19 disruption to forgo an extension to the transition and enter 2021 without a trade agreement.

“Given the UK economy is going to be suffering anyway, this is a good time to conceal the hit from Brexit,” said Seema Shah, chief strategist at Principal Global Investors. “Never waste a good crisis.”