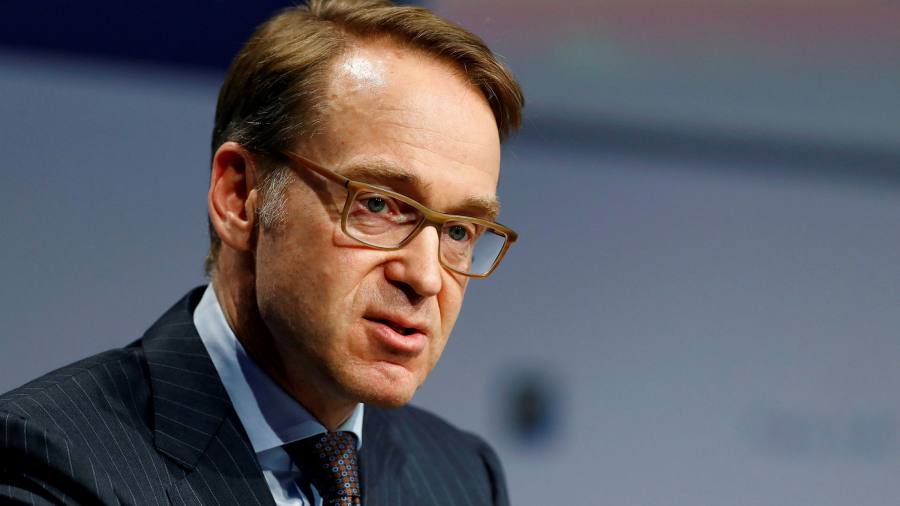 The head of Germany’s central bank has sought to defuse a clash between the country’s highest court and the European Central Bank by suggesting three ways the impasse over eurozone sovereign bond purchases could be resolved.

Jens Weidmann, president of the Bundesbank and a member of the ECB governing council, told German MPs on Wednesday that he was optimistic a solution would be found to address an explosive ruling by his country’s constitutional court against the bond-buying programme.

Mr Weidmann is an unlikely peacemaker in the dispute, because he has repeatedly voted against, and publicly criticised, a policy that has amassed more than €2.2tn of eurozone public debt on the central bank’s balance sheet — prompting accusations that it is bailing out profligate governments.

According to several people who took part in the closed-door discussion between Mr Weidmann and German MPs on Wednesday, the Bundesbank boss said he was ready to help by transmitting documents from the ECB to the parliament and ministers in Berlin.

“We are confident that these things will be resolved in a way that respects central bank independence both for the ECB and for the Bundesbank,” said a spokesman for the German central bank after the discussion.

Mr Weidmann said alternative ways of addressing the court ruling were for the ECB to send documents to the European Parliament, which could then pass them to the authorities in Berlin, or for the ECB to publish a response as part of its own strategic review. The Bundesbank boss discussed the potential solutions with ECB president Christine Lagarde before his discussion with German MPs, which he attended by video call.

Germany’s constitutional court shocked Europe last month when it ruled that Berlin officials and the EU’s top judges had failed to properly scrutinise the ECB’s sovereign bond-buying programme, in a move that threw the bank’s flagship policy into grave doubt.

The court in Karlsruhe ordered the German government and parliament to ensure that the ECB provided a “proportionality assessment” of its bond-buying to ascertain whether the “economic and fiscal policy effects” did not outweigh other policy objectives.

It also said that if the ECB failed to comply within three months, the Bundesbank must stop buying bonds and plan to sell the more-than-€500bn it holds.

Since last month’s ruling, German MPs have been wondering how to respond. But after their discussion with Mr Weidmann, some believed a solution was taking shape. “It would certainly be the easiest option to have the Bundesbank request documents from the ECB, which it would then pass on to the Bundestag and government,” said one MP.

“My sense is that the ECB did assess the proportionality of the bond-buying programme and it has the relevant documents, which it can easily make available to the Bundesbank,” the MP added. “But the Bundestag and government will have to actively deal with those documents, not just take note of them. They will need to actively engage in this process.”

The ECB council is set to hold a regular non-rate setting meeting next week, when it is expected to discuss how to deal with the German court ruling. Among the documents it plans to use to demonstrate it has fully discussed the proportionality of its bond purchases is the public account of its last monetary policy meeting, which is due to be published next week.

Members of the ECB council are determined to avoid responding directly to the court or to the German parliament, insisting that they are governed by the European Court of Justice, which already ruled its public sector purchase programme was legal two years ago. The ECB declined to comment.

One avenue for resolving the impasse has already been explored by German MEP Sven Simon, who last month wrote to Ms Lagarde asking for details of how the central bank assessed the proportionality of its asset purchases. The ECB always responds to MEPs’ letters within six weeks.