Can street vendors save China from a jobs crisis? Beijing appears divided 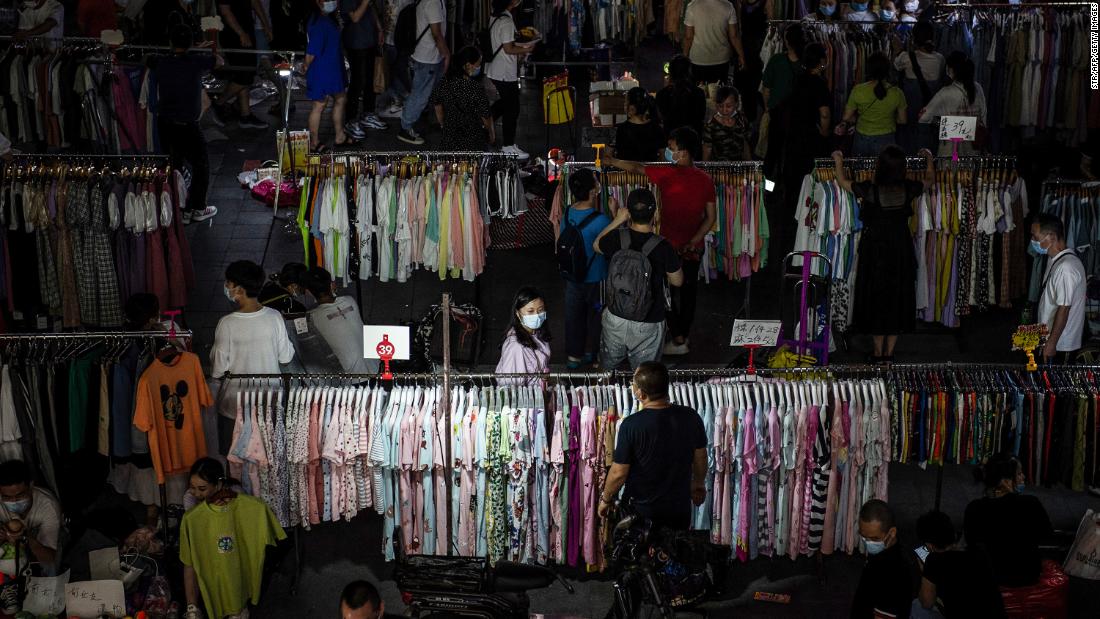 It began to gain traction last month when Chinese Premier Li Keqiang — the second-highest ranking official in China after President Xi Jinping — praised the city of Chengdu for creating 100,000 jobs overnight by setting up tens of thousands of street stalls, which typically sell food, fresh vegetables, clothes and toys.

The government needs to try harder to create new jobs by “breaking through stereotypes,” Li said during a major annual political gathering in Beijing. “China has a labor force of 900 million. Without jobs, there are 900 million mouths that need to be fed. With jobs, there are 900 million pairs of hands that can create enormous wealth.”
The suggestion that street vendors could be the answer to China’s unemployment problem wasn’t limited to Li’s remarks at the gathering. “Mobile vendors” were also mentioned in his annual government work report — which charts Beijing’s priorities for the year — for the first time since he took office seven years ago. Li continued praising street vendors after the gathering during a visit to eastern Shandong province.
Li’s message comes at a stressful time for the world’s second largest economy. From January to March, China’s GDP shrank for the first time in decades. The unemployment rate has also worsened since the coronavirus pandemic began, and unofficial analysis suggests that as many as 80 million people might have been out of work this spring. Before the outbreak, authorities said they needed to create around 11 million new jobs every year to keep employment on track.
But the reaction to Li’s pitch in Chinese state media was swift and fierce. An influx of street vendors in major cities would be “uncivilized,” the state broadcaster CCTV wrote in a commentary piece published online earlier this month. It criticized the idea, without mentioning the premier, as akin to “going back overnight to several decades ago.”
And Beijing Daily, the official newspaper of the city’s government, published several articles that blasted street vending stalls as noisy, obstructive and capable of tarnishing “the capital city’s image and the nation’s image.”

The push for tech

The idea of vendors flooding the streets of high tech metropolises like Shanghai and Shenzhen caused controversy in China in part because Beijing has spent years cultivating the country’s image as an advanced global superpower. Xi’s signature policy project, “Made in China 2025,” has pushed the country to compete with the United States for influence through billions of dollars worth of investment in the technologies of the future.

“Street hawking is something Xi does not like, as it tarnishes the image of the successful and beautiful China he likes to project,” said Professor Steve Tsang, director of SOAS China Institute at the University of London’s School of Oriental and African Studies.

Xi himself in recent weeks has reiterated his longstanding push for high tech solutions to China’s economic woes. He has recently called for the country to invest in 5G networks and next-generation satellites as part of a plan to boost economic growth and employment.

“Efforts must be made in promoting innovation in science and technology and accelerating the development of strategic emerging industries,” Xi said last month during a meeting with political advisers, according to state-run broadcaster CGTN.

But Xiaobo Lü, the Ann Whitney Olin Professor of political science at Barnard College, said Li’s idea has some merit. China has set a goal of eliminating poverty by the end of this year, and Lü noted that street vending and other modest work is where people living just above the poverty line can “find ways to survive.”

Besides, he said, it might not be as effective as it once was for Beijing to roll out large, expensive infrastructure projects as a way to address its economic troubles.

China’s response to its last major economic shock — the 2008-2009 global financial crisis — involved investing heavily in roads, airports and high speed rail lines. This time, that line of stimulus has already been saturated.

“In many aspects, even measured by per capita holding, China has achieved a global leading status” in infrastructure, wrote Zhu Ning, professor of finance at Shanghai Jiao Tong University and a faculty fellow at Yale University, in a research report earlier this year. “Therefore, its need for infrastructure has greatly changed compared with 2008.”

The last financial crisis also left China with a lot of debt, making it important for the country to focus this time on private consumption, Zhu added.

Tang Min, a Chinese government advisor, recently told reporters in Beijing that street hawking would not only create jobs but also address public concern about indoor crowding amid the ongoing pandemic.

“But it can’t replace the ‘regular’ economy — what can be sold or bought on the streets is very limited,” Tang said. “The government can’t let it grow unchecked — it has to be regulated as we continue to experiment with and explore this option.”

During May’s annual political gathering, Li was blunt about China’s problems, and the extent to which some people may not be able to participate in the country’s high-tech future. Some 600 million Chinese — about 40% of the population — earn an average of just 1,000 yuan ($141) per month.

That makes street vendor work a “key source of employment,” Li said during his visit to Shandong province this month, adding that such jobs make China “alive” as much as high-end industries do. A state media news report suggested that lifting restrictions on street stalls — such as allowing roadside business in urban areas — could result in the creation of as many as 50 million new jobs.

“Li is trying to address the pressing issues with a … realistic approach,” said Willy Lam, adjunct professor at the Chinese University of Hong Kong’s Centre for China Studies. While the street vendor approach may not be perfect, he said, there might not be a better alternative for creating a lot of jobs in a short amount of time.

“Employment is an extremely important issue that can trigger political upheaval … Li is apparently worried about the disastrous outcome of massive job losses.”

Tsang, the SOAS China Institute director, said that Li is likely just trying to do his job overseeing the country’s key economic policies.

“The pandemic had resulted in him being allowed to play more of the well-established role of the premier in running the economy, something from which he was side-tracked most of the time in the Xi era,” Tsang said. “He saw how the economic impact of Covid-19 would require a pragmatic and a more emphatic approach, hence allowing, even encouraging, street vending for those laid off as a result of the pandemic. “

Public discussion of Li’s push for street vendors in China has faded in recent days as major cities — including Beijing and Shenzhen — make clear that the policy is not welcome there.

But other local governments in less prosperous regions are quietly pushing the idea forward. Lanzhou, the capital of northwestern Gansu province, on Tuesday announced plans to set up nearly 11,000 street vending stalls — a plan it hopes will create at least 300,000 jobs.
Changchun, the capital of northeastern Jilin province, has promoted the idea, too. The province’s Communist Party boss visited street food stalls in Changchun earlier this month and praised the business as having a “low entry barrier” for people who simply want to find a job, according to the Jilin provincial government.

“Street stalls won’t totally disappear in reality,” said Lam, the Chinese University of Hong Kong professor. He expected local governments to push ahead with the plan as long as unemployment remains a top concern.