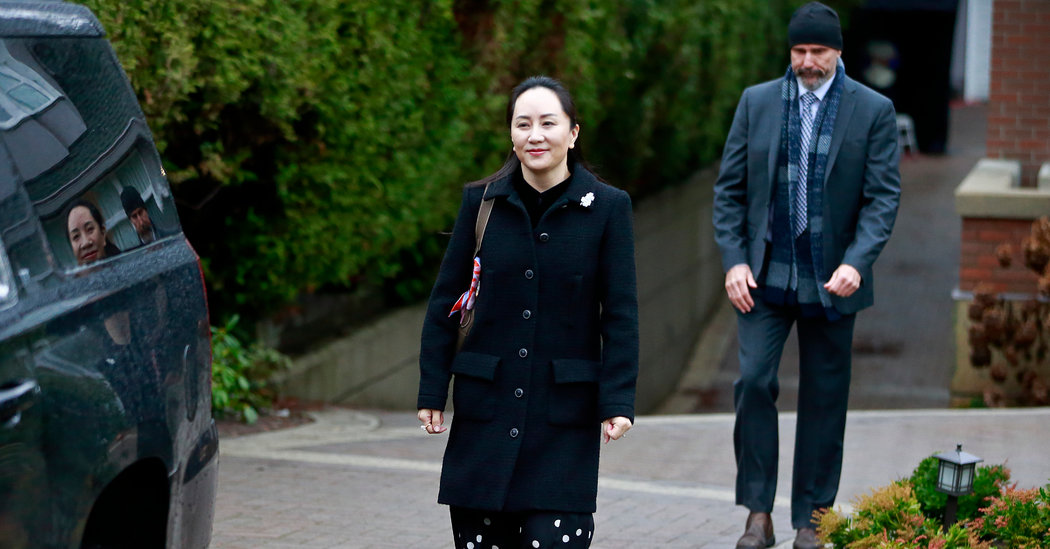 VANCOUVER, British Columbia — It has been one of the biggest legal dramas in recent Canadian memory: whether a senior executive of the Chinese technology giant Huawei can be extradited to the United States on sweeping fraud charges.

On Wednesday the case will reach a crucial point when a judge in Vancouver will decide whether prosecutors have cleared a major hurdle for the extradition to go ahead.

The executive, Meng Wanzhou, was arrested in Vancouver in December 2018, at the request of the United States, and indicted in January 2019.

Her arrest and subsequent detention immediately thrust Canada into the middle of a diplomatic struggle between the United States and China — over trade, theft of technology secrets and whether Huawei’s efforts in helping countries build 5G next-generation mobile networks present a threat to national security.

It also severely strained Canada’s own relations with China. Shortly after Ms. Meng’s arrest, China detained — in retaliation, some say — two Canadians and accused them of espionage. They are still in secret jails in China.

The court in Vancouver is expected to rule on a critical requirement for Ms. Meng’s extradition, specifically on the legal concept of “double criminality” — whether the conduct she is accused of by the United States constitutes a crime under Canadian law.

If the court finds that prosecutors have met this requirement, the extradition hearing will proceed. But if the judge rules in her favor, she could potentially be released, allowing her to travel back to China and complicating Canada’s relations with Washington, its most important ally.

In their indictment against Ms. Meng, now 48, United States prosecutors charged her with fraudulently deceiving four banks into making transactions that would help Huawei evade United States sanctions against Iran.

Her defense team argued that the extradition request did not satisfy the requirement of double criminality because it was based on the accusation that U.S. sanctions against Iran had been breached — sanctions that Canada no longer has in place.

Prosecutors say Ms. Meng lied to representatives of the bank HSBC in 2013 about Huawei’s relationship with Skycom, a company that would clear transactions between Huawei and HSBC in Iran, by saying Skycom was a partner, rather than a subsidiary of Huawei.

They say that misrepresentation amounted to fraud by exposing HSBC to reputational and economic risk in light of the American sanctions.

“Lying to a bank in order to get banking services that creates a risk of economic prejudice is fraud,” said Robert Frater, Canada’s chief general counsel for the Department of Justice, arguing the United States’ case in court earlier this year.

Ms. Meng, the eldest daughter of Huawei’s founder, Ren Zhengfei, one of China’s most prominent businessmen, has denied the allegations.

Even if she loses this round, Ms. Meng will have another chance to fight for her release at a June 15 hearing on the defense’s argument that her rights were violated during her arrest. That hearing may be delayed, however, because the defense and prosecution are wrangling over the release of documents.

The United States indictment charging Ms. Meng also accused Huawei of stealing trade secrets and obstructing a criminal investigation into whether the company tried to evade economic sanctions on Iran by destroying or concealing evidence.

The United States government has repeatedly accused Huawei of stealing technology from its Western rivals and argues that the company’s ties to the Chinese government make it a threat to the national security of countries who adopt its technology in their next generation mobile networks. Huawei vehemently denies that.

The Trump administration escalated its campaign against the company this month by restricting its ability to work with chip makers that produce many crucial components in its smartphones and telecom equipment.

Canada itself has been reviewing whether it should allow Huawei technology in the country’s 5G network.

China experts said the Meng case has spurred Canadians to rethink how to deal with the economic superpower.

In addition to detaining the two Canadians — the former diplomat Michael Kovrig and the businessman Michael Spavor — China also restricted imports of pork, canola oil and other Canadian products after Ms. Meng’s arrest.

David Mulroney, a former Canadian ambassador to China, said that in addition to the Meng case, China’s handling of the coronavirus pandemic, its jailing of the two Canadians, its infringements of human rights in Hong Kong and its mass detention of minorities in Xinjiang meant Ottawa could no longer return to the status quo in its relations with Beijing.

“There has been a global awakening prompted by the pandemic that China is an unreliable partner,” he said.

Last week, Prime Minister Justin Trudeau said China had linked the detention of the two Canadians with Ms. Meng’s case from the beginning, and had failed to understand that Canada had an independent judicial system, free from “political intervention.”

“China doesn’t work quite the same way,” he said.

Ms. Meng’s defense has also filed a separate civil case against Canadian authorities, arguing that her rights were breached when she entered Canada because border officials questioned her for three hours before making an arrest, seized her phones, asked for her passcodes and searched her eight pieces of luggage.

Government prosecutors counter that the border guards had every right to search her and were just doing their jobs.

In early 2019, Ms. Meng was released on bail of 10 million Canadian dollars. She has spent the time since living in two different mansions that her family owns in wealthy areas of Vancouver.

Most recently, she has lived in a gated $14 million, seven-bedroom mansion in the city’s exclusive Shaughnessy neighborhood. Until the pandemic hit, she was able to travel relatively freely around the city — shopping and attending musical concerts — but has had to wear a GPS tracker on her ankle.

She takes daily painting lessons and her mother has been living with her.

Last weekend, she appeared at the steps of the imposing modernist British Columbia Supreme Court, where her case has been heard, making a thumbs-up gesture for photographers.

Many in Canada have noted the contrast between her circumstances and those of the Canadians imprisoned in China, whose access to lawyers and their families is severely limited.

Ms. Meng has appeared in court for several hearings, cutting a glamorous figure in either casual outfits or colorful designer dresses and at times wearing stiletto heels adorned with glitter, which drew attention to the GPS tracker on her left ankle.

On the 70th anniversary of the founding of the People’s Republic of China, she wore a bright red Gucci dress, adorned with an enamel Chinese flag pin.

If Ms. Meng loses her effort to avoid extradition, she could appeal a final decision to the Supreme Court of Canada, a process legal experts said could drag on for years.

After a ruling from the Supreme Court, the case would move to the political arena, with the justice minister of Canada making the final decision on whether she must be sent to the United States to stand trial.